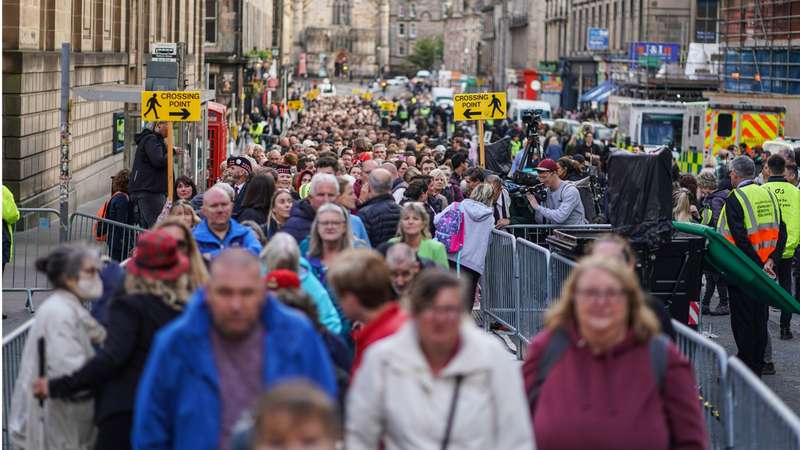 After spending 70 years on the throne, for almost everyone in the United Kingdom, this is the first time a monarch has died. For the people of Scotland, they will never see another Queen and a monarch that rules for seven decades in their lifetime. The long queues outside the St. Gile Cathedral, Edinburgh, show how much the people of Scotland are willing to go to pay their last respect to the one and only Queen they would see in their lifetime.

George Higgins, 61, was among the first of thousands to enter the Cathedral to pay his last respect to the Queen. He arrived as early as 6.45 am, waiting for more than 10 hours before the public would be allowed in to see the Queen’s coffin.

“I wouldn’t miss it for the world,” Mr. Higgins, a former soldier, told Sky News. “I have to go and pay my respects to my old boss.”

“We get the privilege to be able to do this in Scotland, where if she had passed in England, we wouldn’t have. Me coming from Edinburgh, my home city, and she’s lying in St Giles,” he said.

Describing the scene, Higgins said the cathedral was so quiet, and you could hear anyone’s breath.

“It was absolutely amazing… you could have heard a pin drop. It was a really calming feeling,” Higgins continued. “I’m glad I did it, and I would do it all over again. It was a poignant day, and I’ll never forget it.”

The Queen’s body is expected to be at the St. Gile Cathedral for 24 hours before it would be transferred to Westminster this evening (Tuesday), where it will rest for four days until Monday next week.

The presence of the Queen’s children

The four children of the Monarch, including King Charles, arrived at St Giles’ Cathedral to join the vigil.

The King and his wife, Camila, Princess Anne, Prince Andrew, and Prince Edward walked straight to the coffin. Charles stood at the head with the crown behind him and on top of the coffin. They observed a ten-minute silence, a ritual that is part of the burial process. The very emotional royals walked out of the Cathedral, with mourners clapping as they departed.

People can view the coffin until Tuesday evening. The Queen’s body would be transported to London from Edinburgh Airport at about 5 pm. There are reports that waiting lines are gradually forming in London.

It will be wrong to say all is well as citizens pay their last respect to the Monarch. At least two people have been arrested for protesting against the monarchy. Some protesters were seen carrying placards with write-ups like “He is not my King.” The police claimed the protesters disrupted the peace in the area. But, their arrest raised concerns among citizens.

“The fundamental right to freedom of expression, including the right to protest, is something to be protected regardless of circumstance,” Chief executive of Index on Censorship, Ruth Smeeth said”, adding that the arrests were “deeply concerning.”

Director of Big Brother Watch, Silkie Carlo, said: “If people are being arrested simply for holding protest placards, then it is an affront to democracy and highly likely to be unlawful.”

Jodie Beck said protest is a fundamental right of citizens and not a gift from the state.

“Being able to choose what, how, and when we protest is a vital part of a healthy and functioning democracy,” Jodie, campaigns officer at Liberty said.

The police have said protesters have the right to protest and that they will continue to engage the officers on the issue.

“The public absolutely has a right of protest, and we have been making this clear to all officers involved in the extraordinary policing operation currently in place, and we will continue to do so,” Deputy Assistant Commissioner Stuart Cundy said.