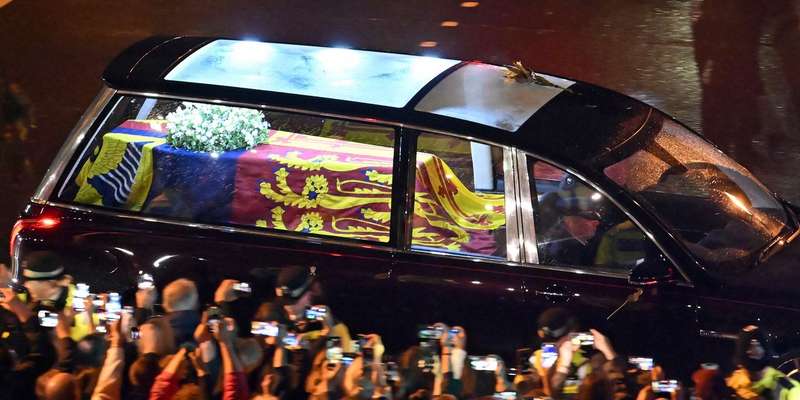 The gray-headed Queen Elizabeth II, who left Buckingham a few months ago, returned home on Tuesday night. This time, she did not return as a Queen but as a former monarch.

Thousands of mourners gathered outside Buckingham palace on Tuesday, hoping to see at least the Queen’s coffin as it arrives from Scotland. The slowly driven hearse was illuminated in the dark rainy night for the crowds to see the neatly covered casket.

The only daughter of the Queen, Princess Anne, escorted the coffin from its Balmoral, where the Monarch died, to Edinburgh where thousands of mourners gathered to pay their last respect to the 96-year-old.

“It has been an honour and a privilege to accompany her on her final journeys. Witnessing the love and respect shown by so many on these journeys has been both humbling and uplifting,” Princess Ann said in a statement.

Later today, the coffin will be transferred from Buckingham Palace to Westminster Hall, where mourners will be able to pay their last respect to the monarch.

More than 750,000 thousand people are expected to see the Queen’s coffin. Already, thousands of people are in long queues in a 30-hour wait, which started yesterday.

The 38-minute journey from Buckingham to Westminster Hall will begin at 2:22 p.m and end at 3 p.m. This time the Queen’s body will be accompanied by the King and his two sons, as well as the other children of the Monarch.

The King will be joined by his sons, Prince Charles and Prince Harry, Prince Andrew, the Duke of York, Princess Anne, Princess Royal, and Prince Edward, the Earl of Wessex. After the body arrives at Westminster, a 20-minute service will be conducted by the Archbishop of Canterbury. After which, the mourners will be allowed to see the coffin.

The royal parks said 38 rounds will be fired for each minute of the procession from Buckingham Palace to Westminster Hall.

“To mark the start of the ceremonial procession of Her Majesty The Queen’s coffin from Buckingham Palace to Westminster Hall a Royal Gun Salute will today take place from 2.22 pm in Hyde Park,” the royal parks tweeted. “38 rounds will be fired to mark each minute of the length of the procession.”

The police say it is expecting a large crowd, which will be reciprocated with highly visible policing.

“This is welcomed as it enables us to continue a highly visible policing presence in central London as well as maintaining neighborhood policing and response in other London boroughs,” Stuart Cundy, Deputy Assistant Commissioner, said in a statement.

“We are expecting large crowds as so many will come to pay their respects to Her Majesty The Queen. Police officers will be in the areas where people are queuing to ensure they are safe,” the statement added.

The police also assured citizens of their freedom to protest, but also touched on the protocol of protests.

“We know there are some people who want to protest on a range of issues even at this time of national mourning,” Cundy continued. “People have a right to freedom of expression and we must balance the rights of protesters with those of others who wish to grieve and reflect.”