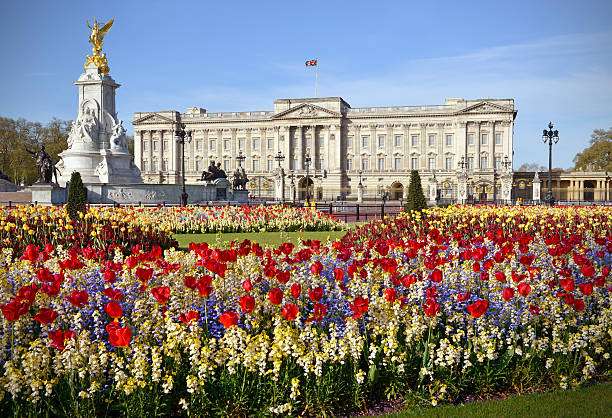 Five days after the sad passing of Her Majesty Queen Elizabeth II, at her Balmoral Estate in Scotland, the coffin which for the past 24 hours has laid in rest at St Giles’ Cathedral in Edinburgh, has been flown back to London, arriving at RAF Northolt just before 6pm, on Tuesday evening.

Aboard the flight was The Princess Royal, Princess Anne, when it touched down around 7pm before travelling on to Buckingham Palace, where it was met by King Charles III and Camilla, the Queen Consort, together with other members of the Royal Family. A guard of honour, found by the King’s Guard, received the coffin, which was then taken to the Bow Room and will be watched over by a rota of chaplains.

The Princess Royal, issued a statement in tribute to her mother before accompanying the Queen’s coffin on the journey from Scotland to London.

It read: “I was fortunate to share the last 24 hours of my dearest Mother’s life. It has been an honour and a privilege to accompany her on her final journeys. Witnessing the love and respect shown by so many on these journeys has been both humbling and uplifting.” She continued: “We will all share unique memories. I offer my thanks to each and every one who share our sense of loss. We may have been reminded how much of her presence and contribution to our national identity we took for granted. I am also so grateful for the support and understanding offered to my dear brother Charles as he accepts the added responsibilities of the monarch. To my mother, the Queen, thank you.”

Earlier in the day, the King and Camilla flew to Belfast where Charles met Secretary of State for Northern Ireland, Chris Heaton-Harris MP, as well as other party leaders. After their meeting the couple attended a prayer service at St Anne’s Cathedral, before returning to London.

The Queen’s coffin will leave Buckingham Palace at 2:22pm on Wednesday 14 September. Crowds will be able to watch as the cortège makes the journey through central London, along Queen’s Gardens, The Mall, Horse Guards and Horse Guards Arch, Whitehall, Parliament Street, Parliament Square, and New Palace Yard.

The procession will include the King Charles III and members of the Royal Family. There will be a firing of guns in Hyde Park and Big Ben will toll. The coffin will be adorned with the Imperial State Crown and carried on a gun carriage of The King’s Troop Royal Horse Artillery. The journey will take exactly 38 minutes, meaning the coffin will arrive at Westminster Hall, an 11th-Century building, the oldest part of the Palace of Westminster and the heart of the British government, at precisely 3pm.

Once there, it will rest on a raised platform, called a catafalque, and will be guarded 24-hours-a-day by soldiers from units that serve the Royal Household. The Queen will then lie-in-state from 5pm, right the way through until 6.30am on the morning of her funeral, on Monday 19 September.

Possibly over one million people could file past the coffin during the four and a half days and mourners wishing to do so have been warned queues could reach upwards of 20 hours. The last member of the Royal Family to lie-in-state in the hall, the oldest part of the Palace of Westminster, was the Queen Mother in 2002, when more than 200,000 people queued to view her coffin.

It is estimated that figure could multiply by as much as five times and potentially even higher. It is something many will feel compelled to undertake as a mark of respect, and a memory to take away that will last a lifetime.

Members of the public have been invited to take part in a minute’s silence at 8pm on Sunday 18 September, the evening before the funeral takes place. “The silence can be marked privately at home on your own, or with friends and neighbours, out on your doorstep, or in the street with neighbours, or at any locally arranged, community events and vigils,” a spokesperson for No 10 Downing Street said.

Mourners wishing to pay their final respects to the Queen have been warned to expect incredibly long queues. Huge crowds, never before seen, are expected and there are warnings those wanting to take part in the historic occasion may have to wait for many hours, and very possibly overnight. Delays are inevitable on public transport, as too are frequent road closures.

People are asked to respect the dignity of the event, including by remaining silent while inside the Palace of Westminster and dressing appropriately; there will be no admittance for anybody with political, or offensive slogans on their clothing. No filming, or photography will be permitted, and those queuing are also asked not to attempt to queue on behalf of others, leave personal items unattended, or put up tents.

Also being politely admonished are those individuals who keep leaving Paddington Bears and marmalade sandwiches at the Royal Parks. A request has been added to one made asking people to only lay organic or compostable materials, in the interests of sustainability. This includes all “Non-floral objects and artefacts, such as teddy bears or balloons, as well as lit candles.” Additionally, all plastic wrapping must be removed from flowers.

Paddington and the Queen created one of the most memorable moments of the recent Platinum Jubilee with an endearing sketch, in which the Queen “revealed” that she kept marmalade sandwiches in her handbag. It delighted millions of people around the world, going viral at the time and again in recent days. Amongst the many tributes and messages that have flooded in since news of her passing broke, was one from Her Majesty’s little co-star, who simply tweeted: “Thank you Ma’am, for everything.”