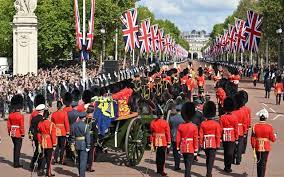 In a deeply moving procession of elegance and remarkable synchronicity, the coffin of Queen Elizabeth II has this afternoon been taken from Buckingham Palace to Westminster Hall by gun carriage, where Her Majesty will Lie-in-State, until the morning of her funeral, on Monday 19 September.

From the first beat of the muffled drum to start the procession, time seemed to stand still in a demonstration of impeccable professionalism and organisation. Marching at a slow, but perfectly coordinated pace, the ceremonious cortège was headed by the Household Cavalry and Grenadier and Scots Guards. The immaculately behaved and wonderfully turned out horses would have made Her Majesty immensely proud.

Crowds of mourners witnessed the incredible spectacle in respectfully observed silence as they looked on, listening to the haunting sound of the accompanying mournful music, in a display of marching unrivalled anywhere in the world. The silence was punctuated only by the toll of Big Ben, and distant sound of guns being fired from nearby Hyde Park, at one minute intervals.

Salute at the Cenotaph

Following behind the coffin were the immediate members of Royal Family, led by King Charles III, who saluted as they passed the The Cenotaph, the war memorial to the British and Commonwealth dead from conflicts around the world. The procession passed the statue of Winston Churchill, who was the first Prime Minister of Queen Elizabeth II. There was a ripple of spontaneous applause on arrival at Westminster Hall absolutely on the dot of 3pm, as was scheduled and as could be pretty much be guaranteed.

Eight soldiers of the Queen’s company of first Battalion of the Grenadier Guards, removed their bearskin hats in preparation to carry Her Majesty into Westminster Hall. The coffin was draped in the Royal Standard, which represents the sovereign and the United Kingdom. It features three gold lions for England, one red lion for Scotland and a harp for Ireland. Once inside, the Imperial Crown was placed on top, which consists of the St Edward’s Sapphire, the Black Prince’s Ruby, and the Cullinan II diamond, cut from the largest diamond in the world. The sovereign’s orb and sceptre were also placed along side.

Now lying-in-state, respects will be paid to Queen Elizabeth II by hundreds of thousands of members of the public, over the next four and a half days. A Massive queue has formed along the banks of the river Thames, starting at the Albert Embankment, then continuing behind the London Eye all the way to Southwark Park.

People will receive wristbands as they enter the queue to enable them to use portable toilets at various points along the route and then regain their place in the queue. In addition, local venues and museums will stay open for extended hours and in some cases for 24 hours, for people to use their facilities.

Who will attend the funeral?

The funeral is set to be one of the biggest gatherings of royalty and politicians hosted in the UK for decades. Invitations have been sent out and over 500 heads of state and foreign dignitaries are expected to attend the service in Westminster Abbey, which has the capacity for around 2,200 people.

Believed to definitely attending are members of royal families from across Europe, many of whom were blood relatives of the Queen. The include: King Philippe and Queen Mathilde of Belgium; King Willem-Alexander and Queen Maxima, King Felipe and Queen Letizia of Spain and the royal families of Denmark, Norway and Sweden.

Leaders from across the Commonwealth such as: Prime Minister’s of Australian, New Zealand and Canada – Anthony Albanese, Jacinda Ardern and Justin Trudeau respectively, will all be there. Bangladeshi Prime Minister Sheikh Hasina and Sri Lankan President Ranil Wickremesinghe have reportedly accepted invitations, and although the Indian Prime Minister Narendra Modi is yet to confirm, it is expected that he will be there too.

The majority of leaders have been asked to arrive on commercial flights and told they will be taken en masse, from a site in west London. Invites have not been sent to Russia, Belarus, Myanmar, Syria, Venezuela, or Afghanistan, while Iran, North Korea and Nicaragua will only be represented at ambassadorial level, according to Whitehall sources.

After funeral service on Monday, the coffin will be drawn in a walking procession from Westminster Abbey to Wellington Arch, at London’s Hyde Park Corner, before heading to Windsor Castle by hearse.

She will then be taken to St George’s Chapel for a private service, before being laid to rest.