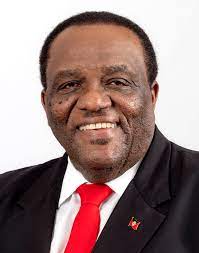 Work on the roof of her Majesty’s Prison is expected to begin immediately says National Security Minster Steadroy Benjamin.

There have been concerns over a compromised section of the old Remand Housing Center after a spate of escapes by prisoners.

Benjamin said in an interview on Thursday that the Cabinet has decided to have the roof repaired.

“As far as the prison is concerned, yes, we are concerned about the situation. Cabinet discussed the matter for a very long time and it was agreed that money will be made immediately to effect repairs to that area of the prison from which prisoners often escape through the roof,” he said.

Benjamin said the drawing has already been reviewed and will be delivered to the government by the Public Works Division.

“A contractor will be employed almost immediately to commence work as soon as it is practical. I would say within the next 21 days, that problem will be fixed. The government has the responsibility to ensure prisoners are kept safe within the prison while they are there and there is no opportunity for escape,” he added.

Superintendent of Prison Jermaine Anthony said that around 10:30 p.m. last week Sunday Ramone “Rusty” Thomas and Kelson “Club Social” Andrew got away through a compromised roof in the building, then jumped over the prison wall.

The prisoners reportedly made the getaway through sections of the roof at the old Remand Housing Center which Anthony confirmed had been compromised for some time.

They broke through the galvanize in the roof and escaped. There is a need to repair the entire building immediately.

We have had several breaches of that roof in so many years,” Anthony said.
The old Remand Housing Center is the building in question. somewhere around 20 inmates are housed there.