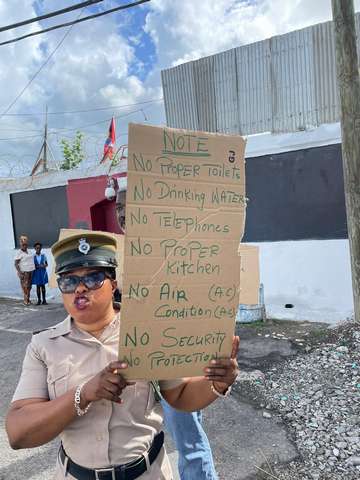 Chief of Staff in the Office of Prime Minister Lionel Max Hurst has confirmed that work to improve facilities at His Majestys Prison will be done.

His comment comes on the heels of two days of protest by prison officers who are demanding better working conditions and other benefits including poor management.

The workers have also called for the removal of Superintendent Jermain Anthony, who they say is corrupt.

The prison officers have also asked that the government apologize to them after they were accused of being corrupt following a major raid, which resulted in the seizure of a large haul of contraband.

“We know that prison is not ever a beautiful place to work and it requires special training, special preparation, and of course special circumstances. Especially so the material circumstances under which the prison officers are to work. So everything is being done to improve on these conditions,” Hurst said.

He said while he understands the plight of the prison officers, the government has done quite a bit of work to improve the service delivery there, including hiring caterers to prepare meals and increasing bathroom facilities for prisoners.

Outstanding pay and overtime, lack of manpower, lack of skills in dealing with mentally ill inmates, inadequate risk allowance, and health and safety concerns as just a few of the many other ills that have been affecting prison officers for more than 10 years.

National Security Minister Steadroy Benjamin confirmed last week that work is underway to address matters at HMP in a “strategic and systematic manner”, which includes the general prison environment and allowances that are owed to prison officers.

Works Minister Lennox Weston supported his colleague, saying that the plan to retrofit the entire penal institution would be done in stages.

Weston said that a facility where 180 prisoners could be housed was recently completed and another phase has begun with the aim of finishing it before the end of the year.

“We are going to do the second area now. We are working on the Remand Centre and the whole building needs to be replaced, the toilets need updating to international standards, we are fixing the roof and also inside,” he was reported saying.

“We are going as quickly as we can … we are building the prison inside out. This is just the second phase. We are going building by building,” Weston said.