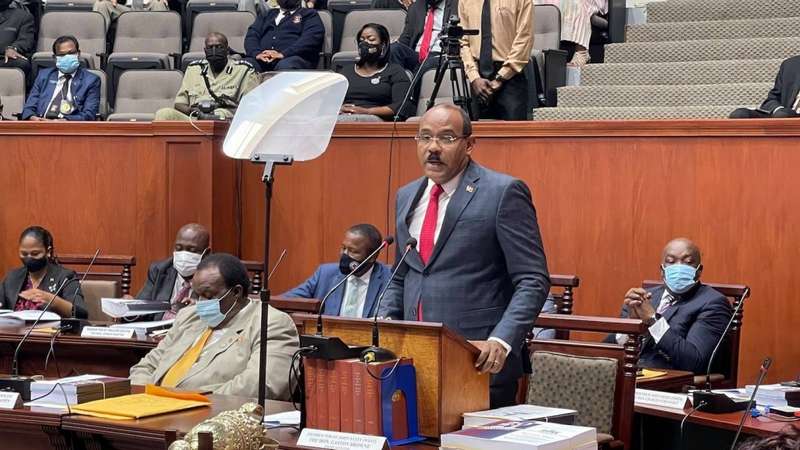 Parliamentarians in Antigua and Barbuda paid their respects to the late Queen Elizabeth II who passed away last Thursday, with nothing but high commendations.

Prime Minister Gaston Browne was the first official to pay his respects ahead of this departure from the island to attend the Queen’s funeral on Monday, saying that in the seventy years of the Queen’s reign she met every head of the country

“We mark the passing of our former head of state. We do so with affection, admiration, and respect for her enduring legacy of service, resilience, and quiet demeanor which inspired us all. May the legacy of her exceptional example endure into perpetuity,” Browne told Parliament on Thursday.

Browne said Antigua and Barbuda has lost the only head of state known to its population.

“Every one of her heads of government of Antigua and Barbuda including myself can attest to the warmth of her personality and humility to which he carried out her duties as queen. She had an abiding interest in the countries of which she was Queen and ours was no exception,” PM Browne said.

Meanwhile, Leader of the opposition Jamal Pringle said the Queen performed her duties with integrity.

“Over the 70 years of her reign, she was highly visible as the monarch and head of states. She treated her obligations seriously buy cheerfully as demonstrated during her visit to Antigua and Barbuda in 1977. We know the new King has very big shoes to fill and so the UPP wishes him success in his new role,” Pringle said.

And Attorney General Steadroy Benjamin said many in the country have benefited from the queen’s reign.
He said although she was the head of state, she did not interfere in the business of the country’s parliament and conduct of government affairs.

“Even though she was physically present in Britain, she sought to be engaged in the welfare of her citizens in other realms including Antigua and Barbuda,” Benjamin said.

The royal family announced she died Thursday at Balmoral Castle, her beloved summer residence in Scotland, where members of the royal family had rushed to her side after her health took a turn for the worse. She was 96.
Her 73-year-old son immediately became King Charles III and released a heartfelt statement from Balmoral, where he went with his wife, Camilla, the nation’s new Queen Consort.