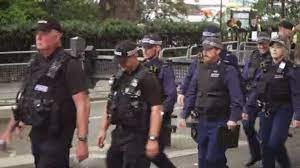 Security personnel are gearing up for the biggest event that the UK has ever hosted, with the Metropolitan Police force confirming that the funeral of Her Majesty Queen Elizabeth II will be its largest, and most complex operation ever. Planning for the occasion has been going on for many years, but now it all has to come together on an unprecedented scale.

In the hours and days ahead of the funeral on Monday 19 September, many of the world’s leaders including the likes of the US president and the Japanese emperor, as well as kings and queens from around the globe, will assemble in London, for a very public funeral, making security all the more challenging.

Of course it all will be played out in front of hundreds of millions, possibly even into the billions of television viewers, and will provide the international terrorist element with some very tempting targets. MI5 are working behind the scenes with counter-terrorism police and military personnel, including Gurkhas and Paratroopers, plus Navy and RAF representation. There has been a step up in the monitoring of “subjects of interest”, people suspected of involvement in violent extremism and terrorism. There is a constant presence of Wildcat helicopters making regular flights around the immediate area of Westminster.

Police take to rooftops with armed police officers with binoculars already visible in and around the area, and every manhole is being checked for anything in the slightest way suspicious. Each lamp post will be opened and examined. Anywhere where an improvised explosive device could be hidden will be peered into. Dogs sniffing for explosives will pass through the abbey and its  surrounding areas, time and again right up to the morning of the funeral. Also, the Met have appealed to the public to be the first line of defence, asking them to be their own eyes and ears, to look out for each other, stay vigilant, trust instincts and report anything that does not feel right.

Watching the 5 mile long queues lining up to pay their respects to Her Majesty lying-in-state at Westminster Hall are police specialists, trained to identify people preparing a terrorist act. At the main police control room just south of Lambeth Bridge, officers are watching footage from hundreds of fixed CCTV cameras, many having been installed additionally at vulnerable sites, or where there are holes in the coverage. Dogs specially trained to sniff out explosives and firearms are passing periodically through the crowds.

Assistance from other forces

In addition, thousands of police officers are being deployed in central London each day, with a significant number of reinforcements being provided by other forces from around the country, including Scotland and Northern Ireland, as the force recognises that they must ensure that the people who live in London are reassured that they have not been abandoned, and normal day-to-day policing continues.

The funeral can to some extent, be compared to those of the Queen Mother and Diana, Princess of Wales, but the extraordinary number of heads of state visiting the capital for this event makes it so much more complicated. “At every event that we police in London, we are considering the threat from terrorism, the threat from crime, and looking after people at the same time.” said Deputy Assistant Commissioner Stuart Cundy. The threat has also changed. What are known as “lone actor” attacks using vehicles as weapons, or knives that can be bought from supermarkets, have become commonplace in the last decade.

Transport of heads of state

Heads of state will attend a reception with the King at Buckingham Palace on Sunday night, before gathering at Westminster Abbey for the funeral itself the following day. Most dignitaries will use transport provided by the UK government to travel there, but President Biden will be allowed to use his personal armoured car, “the Beast”, and some other heads of state will also use their own vehicles.

Firearms officers will be discretely positioned across the secure area, with snipers stationed on buildings and the SAS and army bomb disposal teams will be on standby, as London is expected to grind to a standstill. Uniformed PCs will line the route alongside undercover operatives and up to 1,500 soldiers will be deployed to help control the crowds.

Road closures and exclusion zones will be increased across the capital with blocks already in place around Buckingham Palace and St Paul’s Cathedral and more will come into force as the funeral gets nearer. Police have been granted a no-fly zone order over London on September 19, to add to security as well as to not disturb the proceedings with unnecessary overhead noise.

From an organisation and security operation point of view, there will be a massive combined sigh of relief when it is all over, but of course the underlying desire from everybody will be for the day to pass trouble free and for Her Majesty Queen Elizabeth II to receive the fitting send off that she so richly deserves.