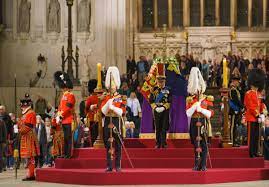 For the second time in a week, the four children of Queen Elizabeth II have observed a short vigil for their mother. King Charles and his three siblings, the Princess Royal, the Duke of York and the Earl of Wessex, attended Westminster Hall where Her Majesty is presently lying-in-state, until her funeral on Monday 19 September. They had previously done the same as the Queen lay at rest in St Giles’ Cathedral in Edinburgh.

Additionally, the eight grandchildren of the Queen Elizabeth: the Prince of Wales, the Duke of Sussex, Peter Phillips, Zara Tindall; Princesses Beatrice and Eugenie; Lady Louise Windsor, and James, Viscount Severn, will all hold a separate vigil on Saturday 17th where at King Charles’ request, Princes William and Harry will both wear military uniform for the occasion. Prince Harry has worn a morning suit at public events since the Queen’s passing. This will be the first time he has been seen in military uniform since stepping back as a senior royal in 2020.

As the four of them stood at each end and sides of the coffin, members of the public continued to file past to honour their former monarch. They had in most cases been queueing for between 12 and 15 hours for the privilege, Just to show that celebrity status counts for nothing in these circumstances, earlier in the day, footballing legend David Beckham had queued himself for 13 hours, joining at 2am in the early hours of the morning. He told the press, he was more than happy to do so for the opportunity to pay his own respects.

Pope will not be coming

One person who sadly will not be able to pay their respects in person is Pope Francis. The Vatican confirmed that the Pope’s de-facto foreign minister, The Most Reverend Paul Gallagher, secretary for relations with states and international organisations, will represent him at the funeral service. They said this is due to the Pope suffering on-going problems, that had impacted his mobility quite considerably, so it was felt it would not be wise to attend.

On another busy day, King Charles III had spent the first part of the day visiting Wales, the country he represented so long as Prince of Wales, returning now for the first time as King. His visit meant he had completed visits to all four home nations in the time since Her Majesty’s death. He had met with the First Minister of Wales, Mark Drakeford at Cardiff Castle. Just as they had in the other three capital cities of the British nations, people lined the streets to catch a glimpse of the King on his route, and cheer him loudly.

Sadly there was a growing amount of anti-monarchy protesters on show, gathering to display their disenchantment. Indeed, boos and chants of “not my king” could be heard as he arrived, but didn’t seem to be affected by it. Back in London, the mayor of the city, Sadiq Khan, said protesters are “not enhancing the cause of Republicanism, by protesting in the way that some are thinking of doing during mourning for the Queen.”

However, he pointed out that whilst it is not a criminal offence to be irreverent, or to campaign in bad taste, he did feel that it was disrespectful, especially to a backdrop of the incredible grief, sorrow and affection that the country were showing towards Her Majesty at this time.

It does seem that for some people, respect is not a word in their vocabulary.