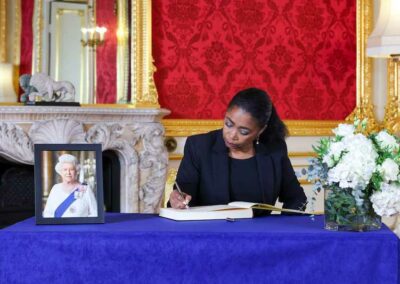 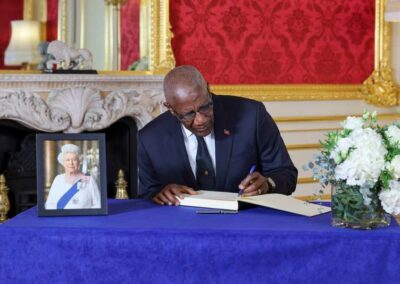 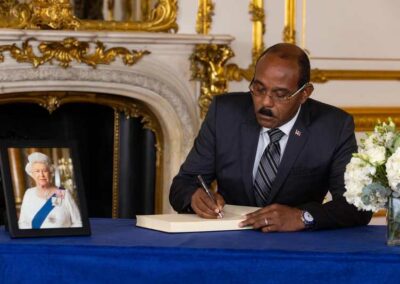 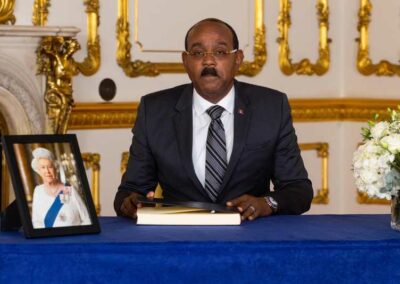 The Antigua and Barbuda leaders currently in London to attend the burial of Queen Elizabeth II all signed the Book of Condolences on Saturday ahead of her burial on Monday.

Governor General of Antigua and Barbuda, Sir Rodney Williams and Lady Williams, and Prime Minister, signed the Book of Condolence at Westminster Hall in London where the late Queen lies in state before her State Funeral on Monday.

The Antigua and Barbuda leaders are in London where they are joining other foreign dignitaries for what is expected to be one of the biggest diplomatic events in recent years, with over 500 heads of state and other dignitaries expected to attend the funeral of the late Queen Elizabeth II at Westminster Abbey on Monday.

In Antigua and Barbuda, Monday 19th September, the day of the State Funeral for Her Majesty, has been declared a public holiday and a National Day of Mourning.

On Monday at 11 a.m. at the Cathedral of St. John the Divine, Governor General’s Deputy, Sir Clare Roberts, and Acting Prime Minister, Steadroy Benjamin will participate in a Thanksgiving Service for the Life and Service of Her Late Majesty Queen Elizabeth II.

The Thanksgiving Service will be followed by a parade through the streets of St. John’s by members of the country’s security forces.