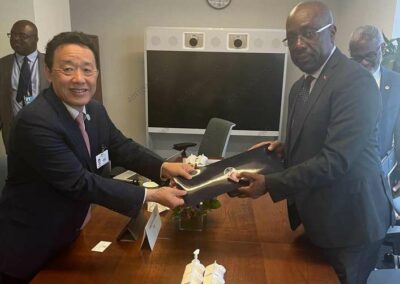 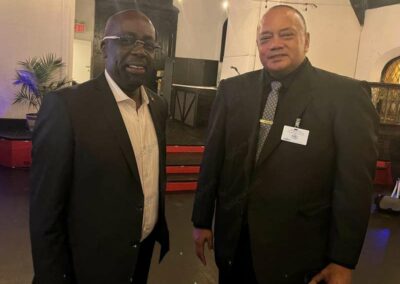 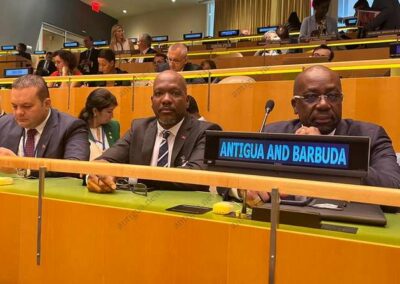 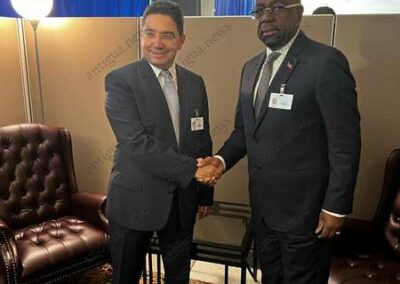 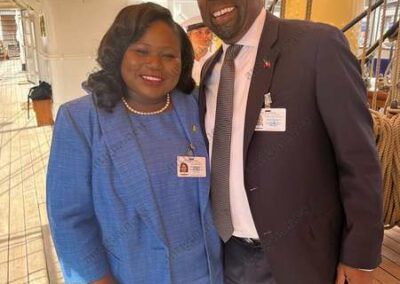 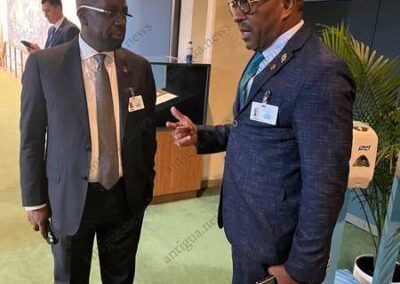 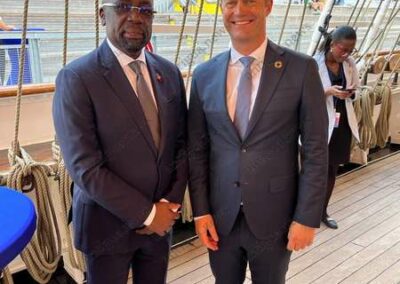 Climate change continues to dominate talks at the United Nations General Assembly, with Foreign Affairs Minister E.P Chet Green telling world leaders that the issue continues to be a prevailing one for the twin island nation.

Minister Green is among some top officials from across the region and the world by extension, currently in New York at the UN Summit.

He told those gathered at the Global Development Initiative Ministerial Meeting at the UN that climate change has increased the intensity and frequency of hurricanes, destroying infrastructure and the environment.

He drew their attention to the recent passage of Tropical Strom Fiona, now a hurricane that caused electrical power outages in Antigua and Barbuda for over 36 hours in some communities.

“Other islands suffered serious damages to home and other infrastructure,” Green said.

Another pressing concern outlined by Green was the Covid-19 pandemic.

He said Small Island Development States must recognize and continue to promote the importance of innovation in our response to the challenges brought on by climate change and the COVID Pandemic.

“The Covid-19 Pandemic has given rise to a myriad of economic and social challenges that will take years for small states to overcome. The excessive amount of limited funds spent on the refitting and remodeling of special Infectious disease centers and the training of laboratory staff to meet the needs for testing surveillance has impacted the small budgets of our small nations. My government is indeed thankful to the global community of nations, to the World Health Organization and the Pan American Health Organization for the tremendous and continued support provided to Antigua and Barbuda,” Green said.

He said international monetary policies that adversely impact our economic growth and development such as the Official Development Assistance (ODA) Graduation process and the blacklisting of States as non-cooperative tax jurisdictions, are another pressing issue.

He also echoed the sentiments of His China Foreign Affairs Minister Excellency Wang Yi, for the global community to remain dedicated to ‘development’ as a priority for international cooperation and alliance building.

“It is this kind of cooperation, supported by peaceful and respectful exchanges that underpin the Global Development Initiative introduced by the Peoples Republic of China. The People’s Republic of China is a loyal friend and partner of our twin-island State, and we wish to make public our unwavering solidarity,” Green said.

Adding, that in an interconnected world, values such as cooperation, solidarity, mutual respect, and justice are paramount to the establishment of a fairer and more equitable international community.

“Antigua and Barbuda, therefore, support the principles outlined in the Belt and Road and GDI framework and firmly believe that they will foster stronger and more effective approaches to development.  These development initiatives have ensured cooperation in areas about the 17 Sustainable Development Goals and provide tremendous hope for advancing development initiatives for small island states,” he added.

As part of China’s GDI and Belt and Road Initiatives, Antigua and Barbuda, he says has recently benefitted from the establishment of a fully functioning Narcotics Laboratory for the Royal Police Force.

“Recently we signed an agreement for the building of 152 affordable social houses for citizens who may not necessarily meet the criteria for commercial loans.  Additionally, we have completed the reconstruction and expansion of one of the most modern port facilities in the Eastern Caribbean and also benefited from an Agricultural Technology Cooperation Project that has contributed to the backyard gardening initiatives, boosting the local food security at the height of the pandemic,” he said.

Green did not fall short of mentioning that, China recently opened its market to lobsters from Antigua and Barbuda, by officially recognizing a local seafood company as a lobster supplier to China,” he said.

“These are some tangle examples of GDI and Belt and Road projects with a strong development focus designed and executed in partnership with Antigua and Barbuda,” Green said.

He ended his well-delivered remarks by saying that from our experiences in Antigua and Barbuda the GDI supports social and economic challenges in developing countries, thereby giving a boost to fulfilling the 2030 Agenda for Sustainable Development.

As chairman of the Caricom Foreign Ministers Committee, Greene made a case for recognition of the MVI over the failed and inequitable GNI, a call for multilateralism and for COP 27 to be treated with the seriousness it deserves.

He also met with the Foreign Minister of Morocco on the margins of the UNGA in NYC yesterday where they had bilateral talks on strengthening diplomatic ties, scholarships in technical and academic areas, agricultural support.

The Minister also met with Dominica’s Foreign Affairs Minister Dr Kenneth Darroux. He is expected to meet with the Crowne Prince of Denmark during a luncheon later today.