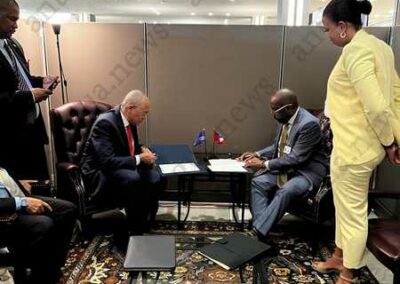 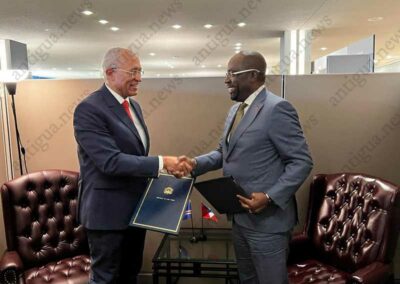 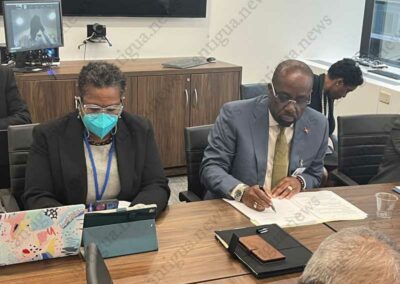 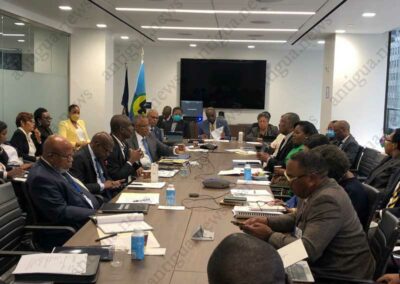 Antigua and Barbuda’s Foreign Affairs Minister is undoubtedly a man built for the rigors of public life with a penchant for service and representation.

For a fourth straight day, E.P Chet Green did not miss a beat as he performed his duties in and around the United Nations General Assembly in New York.

Among his list of activities, Minister Green signed an agreement on behalf of Antigua and Barbuda, with the Western African nation of Cabo Verde

Green, who also had talks with Cabo Verde’s Foreign Affairs Minister Francisco Andre’ said that known as the Caribbean of Africa, Cabo Verde shares much in common with Antigua and Barbuda, including a common ancestral heritage and a development agenda incorporating the UN Sustainable Goals.

Under Greene’s watch as Foreign Affairs Minister, Antigua and Barbuda 2020 initiated a ‘deliberate’ program of ‘reconnecting’ with Africa.

Meanwhile, Greene chaired a meeting of the Caricom Foreign Ministers (COFCOR) on the margins of the UNGA.

The meeting, the first at a UNGA since the pandemic started in 2020 served to update several Caricom positions and as an engagement with the Caricom Caucus of ambassadors in New York.

The regional Foreign Ministers received reports from several regional technocrats based in the Caricom Secretariat based in Georgetown, national delegations from representative member countries, and from Dr. St. John on the state of the pandemic, inoculation, and future pandemics in the region.

Antigua and Barbuda’s Permanent Representative to the UN, H.E. Dr. Walton Aubrey Webson updated the meeting on this country’s leadership of AOSIS and the development of a new tool that is being promoted to replace the archaic, anachronistic, and failed GNI index, the Multi Vulnerability Index (VNI).

The situation in Haiti fueled much discussion as ministers weighed in on presentations from Dr. Granderson from the Caricom Secretariat and an update by the Haitian Foreign Minister, Jean Victor Geneus.

At the close of the exchanges, Minister Greene reiterated the support of Caricom for the restoration of normalcy in Haiti. He was quite emphatic that any meaningful solution must be local by design, nationally respected, and internationally supported.

Pressed for time and affected by a very hectic schedule of engagements for the regional ministers of Foreign Affairs, the meeting was adjourned after hearing a presentation from ambassador Semo Methqal of Morocco who bright greetings from the King and an invitation to deepen functional cooperation with Caricom. 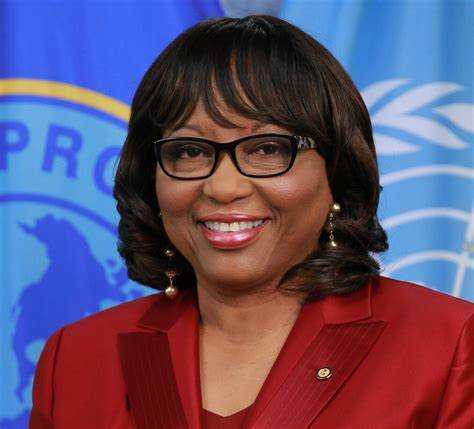