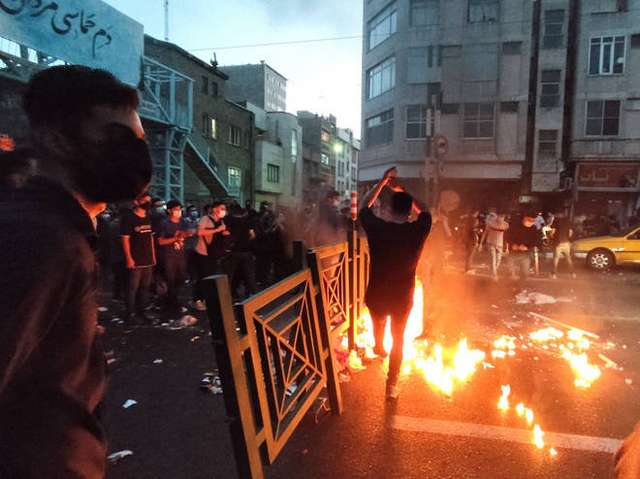 Despite warnings and threats by the Iranian government, protesters have pressed even harder, as they demand justice for the death of 22-year-old Mahsa Amini, who died in the custody of the morality police almost two weeks ago. Apart from demanding justice, Iranians have taken the opportunity to clamour for gender equality and against the forceful wear of the hijab.

The demonstration has spread to at least 40 Iranian cities, including the capital Tehran despite the government’s effort to clamp down on protesters.

On Saturday, Iranian state television reported that at least 41 people have died according to its count, but there was no official death toll. They also said at least 700 protesters had been arrested, but others think the figure could be much higher.

Maryam Rajavi, the president-elect of the National Council of Resistance of Iran, a broad political coalition looking to overthrow the Islamic government of Iran, said about 180 people have died, and 8,000 had been arrested in the 9-day protest.

“In 9 days of Iran Protests, 180 laid their lives for freedom. 8,000 were arrested. The people of Iran give life to the UDHR by resisting a regime that tramples fundamental human rights. I urge the international community to condemn the clerical regime and support protesters,” Ms. Rajavi said on Twitter.

Antigua news could not independently verify the figures as there is no official figure released at the moment. Also, different international organizations and human rights groups have varying figures as casualties.

On Saturday, Iranian President Ebrahim Raisi vowed to take decisive action against those “who disrupt the country’s peace and security.”

He also said he would not allow Iran’s “enemies to endanger the security of the country and people.”

The intelligence ministry of Iran also said it would prosecute protesters that participate in what it describes as “illegal gatherings.”

“Considering the exploitation of recent incidents by counter-revolutionary movements, any presence, and participation in such illegal gatherings will result in judicial prosecution,” the ministry statement said. The decisive action could be seen in how protesters have been handled in the last few days.

Pictures of young Iranian ladies killed at the protests have been shared on social media, including 20-year-old dancer Hadis Najafi, who protesters claimed was shot six times.

In the past few days, the security forces and protesters have become more aggressive. Footages shared on social media showed protesters throwing objects at the men in uniform, while the police were seen mishandling the protesters, especially females without head coverings. In one of the footage, the police threw one of the female protesters to the ground.

In a bid to change the narrative of the protest, thousands of government supporters began a counter-demonstration in the capital of Tehran on Sunday. The counter-protesters, who believed that the anti-hijab protest was being fueled by the West, chanted slogans like “Death to Israel” “Death to America” and “We follow the system and the Islamic leaders.” They also claim that copies of the Quaran and Iranian flags were burnt during the protests.

Critics believe that the Raisi-led government organized the counter-protest to quell the 10-day-long demonstrations, and to send a message that the majority of Iranians stand with the government.

The Iranian government on Saturday summoned ambassadors of the United Kingdom and his Norwegian counterpart. Raisi has been critical of the stand of most western countries in the ongoing demonstrations in Iran. He described the publicity of the protest as a double standard and cited cases of death in police custody in the United States.

In a less surprising move, his government has summoned the two envoys over their countries’ purported support for the demonstrations.

The Norwegian envoy, on the other hand, was summoned to explain the stance of Norway’s parliament speaker, an Iranian refugee, who expressed support for the protest on Twitter.

Masud Gharahkhani, the speaker of the Norwegian parliament, had consistently supported the protest in Iran, especially on social media.

“I was born in Tehran. Norway is my country. Every single day I am grateful that I live in a country that is built on democracy, freedom, human rights, and freedom of expression. These are the same values that young people are fighting for in Iran,” he tweeted on Sunday.