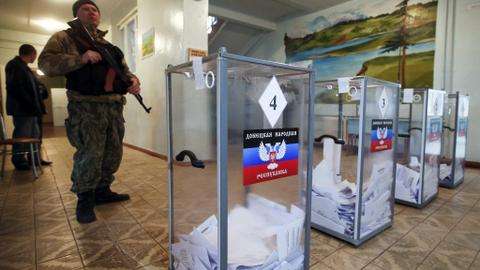 The hastily organized referendum in Donetsk, Luhansk, Zaporizhia, and the Kherson region of Ukraine has finally come to an end. There is no need to ask about the outcome because there was only one possible outcome before the votes began.

Denis Pushilin, the leader of the self-proclaimed Donetsk People’s Republic, said 99.2 percent of participants voted yes to joining Russia. In Zaporizhia, a pro-kremlin official announced that 93.1% of people in the region wanted to become part of Russia. In Luhansk, 98.4 percent voted to join Russia, while Kherson had 87% of people that want to become part of Russia. These territories cover 15 percent of entire Ukraine.

“The results are obvious. Welcome home to Russia!” said Dmitriy Medvedev, a former Russian president and current deputy president of the security council, said after the announcements.

A referendum rejected by the world

The west and Ukraine had consistently insisted that what happened in the four regions was a sham. They have argued that it was not possible for the parts of Donetsk and Zaporizhzhia not under the control of the Russian forces to participate in the so-called referendum and that people could not vote freely when there is a gun pointed at them.

The United Kingdom’s deputy permanent representative to the UN, James Kariuki, has urged the UN to reject the outcome of the polls, describing it as illegitimate.

“We must all unequivocally reject these illegitimate actions and Russian attempts to illegally annex Ukrainian territory,” he said.

“We’ve all seen images of soldiers with automatic rifles accompanying the ballots as they move from door to door, forcing Ukrainians to take part. Any referenda held under these conditions, at the barrel of a gun, can never be remotely close to free or fair,” Kariuki added.

Canadian Prime Minister, Justin Trudeau, said his country would impose new sanctions on those that undermine the sovereignty of Ukraine by getting involved in the referendums.

“Canada does not and will not ever recognize the results of these sham referendums or Russia’s attempted illegal annexation of Ukrainian territories,” Justin Trudeau said on Tuesday.

In the coming days, Russia will formalize the annexation of the four regions, as the country’s parliament has expressed its commitment to accept the outcome of the polls. However, an annexation means Russia would defend these territories like other territories in Russia.

When Dmitry Peskov, spokesperson of the Kremlin said an attempt on the four regions would be treated as an attack on Russia. Experts are worried that Putin is now free to use nuclear weapons, as it now appears legal to do so.

“The entire state territory of Russia that has already been or can additionally be formalized in the constitution of our country will certainly benefit from full protection,” Russian foreign minister Lavrov said on Saturday. “All the laws, doctrines, concepts, and strategies of the Russian Federation are applicable throughout its territory.”

With Russia ready to use all its might to defend these territories, it appears that the worse is yet to come in Ukraine.

The other argument is that Russia, needing more soldiers, would not let go of the young men in the newly annexed regions. They are likely to be conscripted by the Russians.

Ukraine’s National Resistance Center said last week that “it is clear that after the referendums the enemy will announce mobilization on the occupied lands as well because it needs human resources.”

The exiled mayor of Russian-occupied Melitopol, Ivan Fedorov said: “The main purpose of the fake referendum is to mobilize our residents and use them as cannon fodder.”

There are already claims that the Russians have begun the conscription process while the actual Russians are running away for fear of being conscripted.