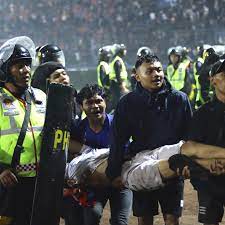 Tragedy struck late on Saturday night in Malang, East Java, when at least 174 people died in a crush at an Indonesian football match that has now taken its place amongst the worst ever stadium disasters. In addition, there were around 180 more who suffered injuries of varying degrees in the aftermath of home team Arema FC’s 3-2 defeat to bitter rivals Persebaya Surabaya.

Following a pitch invasion police tear-gassed fans, which naturally caused panic to ensue and as thousands surged towards the exits, the stampede led to many being trampled to death, whilst others lost their lives through asphyxiation.

President Joko Widodo has ordered that all matches in Indonesia’s top league must be stopped until an investigation has been carried out, which the Indonesian football association (PSSI) confirmed it had launched immediately, adding that the incident had “tarnished the face of Indonesian football”.

It seems that a section of the home fans did not take the defeat very well, and began throwing bottles and other objects at players and officials. As it was the end to an astonishing 23 years of undefeated home games, their disappointment was understandable, but their actions certainly not justified. However, the authorities reaction was completely over-the-top.

Eyewitnesses reported that a tense situation had developed after several Arema fans went on the pitch to remonstrate with the home team players, but they were immediately intercepted by police and beaten back. As more spectators took to the pitch in protest, officers with dogs, and shields, together with dozens of soldiers came forward. More than 20 tear gas rounds were fired fast and continuously at all the stands.

Young children caught up in tragedy

Children and old people were amongst those affected. East Java’s Vice Governor Emil Dardak clarified that at 10:30am the figure of those who had died had reached 174, with more than 100 injured and receiving intensive treatment, in eight seperate hospitals. Eleven of them he confirmed were in a critical condition. A hospital director told local television that one of the victims was just five years old. Nico Afinta, police chief in East Java, stated that two police officers were among the dead.

In the safety regulations set out by FIFA there is a specific directive that no firearms or crowd control gas of any sort should be carried or used, by stewards or police. Amnesty International strongly criticised the use of the tear gas in the stadium and urged authorities to conduct a swift, thorough, and independent investigation and ensure that those who are found to have committed violations are tried in open court and do not merely receive internal, or administrative sanctions. Adding that “This loss of life cannot go unanswered.”

Violence at football matches is not new in Indonesia, and Arema FC and Persebaya Surabaya are long-time rivals, which was why the visiting team’s fans were banned from buying tickets for the game, because of fears of clashes.

Indonesia’s coordinating minister for political, legal and security affairs, Mahfud MD, said organisers had ignored authorities’ recommendation to hold the match in the afternoon instead of the evening. He also said that the government had recommended only 38,000 tickets be printed, but there was instead a sell-out crowd of 42,000.

The Football Association of Indonesia (PSSI) said it would send its own investigation team to Malang to establish the cause of the crush. It also banned Arema FC from hosting home games for the rest of the season. This could not have come at a worse time as Indonesia is scheduled to host the FIFA U-20 World Cup in May and June next year; plus they are also one of three countries bidding to stage next year’s Asian Cup, the continent’s equivalent of the Euros, after China pulled out as host.

Indonesia’s president Joko Widodo has offered his condolences for those who lost their lives in a fatal stampede, saying how he deeply regreted the tragedy and hoped it was the last soccer tragedy in the country. He added that the country should continue to maintain sportsmanship, humanity and a sense of brotherhood of the Indonesian nation.

Sports stadium disasters are sadly not uncommon often resulting in loss of life and multiple injuries, with some of the worse in the past 40 years being:

October 1982 Russia: Fans were crushed as they left a UEFA Cup tie between Spartak Moscow and Dutch side HFC Haarlem at the Luzhniki Stadium in Moscow. Incredibly officials from the former Soviet Union did not disclose the tragedy for many years. When they did, they gave an official death toll of 66, although the number who died in the crush at one specific exit, could it is believed to have been as high as 340.

May 1985, England: 56 people were killed and more than 200 were injured when a fire broke out in an old wooden stand started by a discarded cigarette, at the Valley Parade stadium of Bradford City, who had just clinched promotion and the game had started in a carnival atmosphere.

May 1985, Belgium: Thirty-nine fans died and more than 600 were injured in fan violence before the European Cup final between Juventus and Liverpool, at the Heysel Stadium in Brussels. Panicking Italians had been crushed when retreating from charging English supporters and found themselves crushed when a wall gave way.

March 1988, Nepal: A stampede towards locked exits in a hailstorm at Nepal’s national football stadium in Kathmandu killed ninety-three people, when thousands of fans surged into locked stadium exits, to escape a sudden downpour.

April 1989, England: Ninety-six Liverpool supporters were crushed to death in an over-crowded and fenced-in enclosure at the Hillsborough Stadium in Sheffield before an FA Cup semi-final. Police initially tried to lay the blame with ticketless fans storming gates, but have since had to admit their own negligence and offer official apologies and have been held to account.

January 1991, South Africa: Forty-two people died in a stampede during a pre-season game at the Oppenheimer Stadium in Orkney between the Kaizer Chiefs and the Orlando Pirates. A Pirates fan had attacked Chiefs supporters in the crowd with a knife, leading to chaotic scenes in the stands.

May 1992, France: A stand at Bastia’s Furiani Stadium collapsed before a French Cup semi-final against Olympique de Marseille, killing 18 and injuring more than 2,300.

October 1996, Guatemala: More than 80 people died and at least 147 were injured when an avalanche of fans tumbled down seats and a flight of stairs at a World Cup qualifying match between Guatemala and Costa Rica, in country’s capital.

May 2001, Ghana: More than 120 people were killed in a stampede at Accra’s main football stadium when police fired tear gas at rioting fans in one of Africa’s worst football-related disasters.

March 2009, Ivory Coast: At least 19 people were killed during a stampede at Abidjan’s Felix Houphouet-Boigny stadium, before a World Cup qualifying match against Malawi.

February 2012, Egypt: Fans rioted at the end of a match between Al Masry and Al Ahly in the city of Port Said. At least 73 people were killed and more than 1,000 injured. The Egyptian league was suspended for two years.

January 2022, Cameroon: At least 8 people died and 38 were injured in a stampede at the Yaounde Olembe Stadium, before the host country’s Africa Cup of Nations last-16 game against Comoros.

This weekend’s shocking events will bring back terrible memories for anybody who was involved in what is still the world’s worst stadium disaster. It occurred in the Peruvian capital Lima, in May 1964, during a game against Argentina, when more than 300 people died; but the full story has never been told, and quite possibly never will be.

The stadium was packed to its 53,000 capacity, a little over 5% of the city’s population at the time. Following a disallowed goal there was growing unrest in the crowd. Two spectators entered the field of play, the second of which was on the receiving end of a brutal assault. Missiles were thrown from the stands, which were answered with tear gas going the other way. This led to a terrible crush, which inevitably caused loss of life; but worse was to come for those relieved to escape the turmoil, when they reached the “safety” of the streets outside.

Inexplicably, the police began shooting, resulting in many casualties. The official number of those who died is 328, but this is absolutely an underestimate, as it does not include anyone killed by gunfirem, of which there were many. There are indeed lots of eyewitness accounts of people dying of gunshot wounds, but the judge appointed to investigate the disaster, Judge Benjamin Castaneda, was never able to find the bodies to prove it.

In the scandal that followed there was a huge cover up, with much closing of ranks. The death toll given by the government did not it has been said: “reflect the true number of victims, since there are well-founded suspicions of secret removals of those killed by bullets.”

Peru has never made a serious attempt to get to the bottom of the Estadio Nacional disaster, and this may never now be possible.