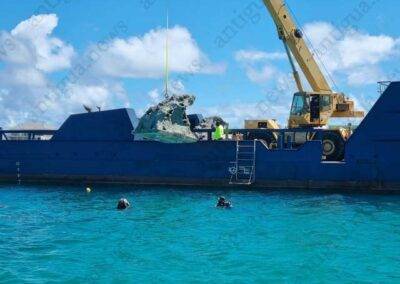 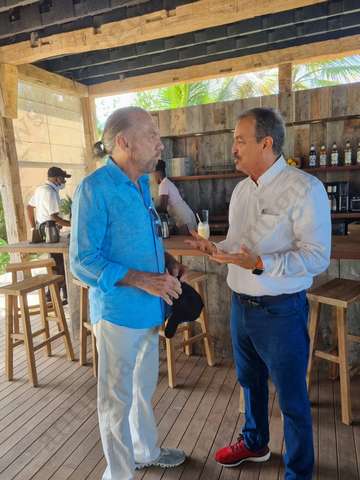 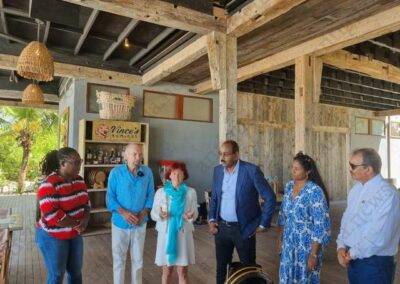 A project dubbed the Ocean Shot has been officially launched on the Sister Ilse of Barbuda and Prime Minister Gaston Browne, along with Minister of Tourism and Investment, Charles ‘Max’ Fernandez, Minister of Housing Maria Browne and Senator Knacyntar Nedd-Charles were there to witness its inaugural.

The project is led by scientist Dr. Deborah Brosnan in partnership with global philanthropist and entrepreneur John Paul DeJoria.

Ocean Shot is the first of its kind to take action for our oceans.

Prime Minister Browne says the newly launched initiative plans to use technology that mimics the design and shape of natural reefs to provide opportunities for colonization by coral and other marine life.

According to the project scope, “Serving as protective barriers for coastal communities against wave action, the coral reefs enable people to set up homes and businesses closer to the ocean. Coral reefs mitigate sand flow to beaches, replenishing the sparkling white beaches that make the Caribbean a global tourist hot spot. The sand itself is thanks to coral and a very important local species that feeds on it. The Ocean-Shot project is starting to operate in Antigua and Barbuda and will be replicated in other Caribbean and Latin American locations. The program may also find a home in other parts of the world in the future.”

The government is directly involved in this project, as is the Minister for Agriculture and Fisheries, Samantha Marshall, Minister for Environment and Health Molwyn Joseph, and Barbuda’s Senator Nedd.

They have pledged their full support and that of their agencies to advance the effort.

In addition, the project links with the policy of ocean resilience and blue economy being developed, including at the University of the West Indies 5-star Campus.

Institutional partners for this project include; Dr. Drew Richardson, President and CEO.

As the leader in the dive industry, PADI’s engagement and partnership helps the wider reach of this effort and ensure that it will be embedded in dive practices.

In addition, this program will form the basis of PADI AWARE Foundation’s development of best practices guidelines for coral reef restoration and monitoring that will be the dive industries’ standard practice and approach.