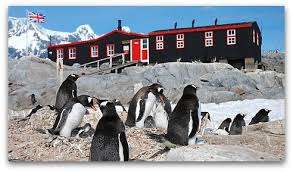 There can’t be many women who would volunteer to spend five months without running water, or a flushing toilet, in sub-zero temperatures; but that is exactly what four ladies have done, by putting themselves forward and successfully being accepted, to travel 9,000 miles from the UK to a remote part of Antarctica, to take on the challenge and responsibility of managing an historic site.

The quartet of Natalie Corbett, Mairi Hilton, Clare Ballantyne, and Lucy Bruzzone have been selected to run the most isolated Post Office and museum on the planet, at Port Lockroy, on Goudier Island, located on the southern continent. They beat a record number of 6,000 applicants to oversee the re-opening, and then maintain the site which has been shut ever since the Coronavirus pandemic hit.

Just the penguins for company

The roles were advertised by the UK Antarctic Heritage Trust (UKAHT) charity, seeking suitable candidates to take care of their flagship site. The women will be subjected to almost constant daylight, freezing conditions and will also be charged with monitoring a large colony of gentoo penguins, that they will share the location with. The women struggled to contain their excitement as they set off to their new “home” from where they are not due back until spring is in the air, back in the UK.

31-year-old newly wed Ms Corbett from Hampshire, will be in charge of running the gift shop at the site’s museum. She joked that leaving her husband behind meant this was her chance at a “solo honeymoon”.

Despite ten years of working in retail, it is unlikely that it has been able to fully prepare her for what she is about to experience. She said she could not resist the opportunity: “Who wouldn’t want to spend five months working on an island filled with penguins in one of the most remote places on the planet?” Possibly not what her new husband wanted to hear, but there will be plenty of time to “catch up” in the new year, no doubt.

Ms Hilton, from Bo’ness, near Falkirk in Scotland has been tasked with penguin duty, and said as a conservation biologist, she was thrilled with the chance to personally see the penguins and other wildlife like seabirds and whales. Whether she is quite so enamoured at the task towards the end of the project, remains to be seen.

The responsibility of running the Post Office falls to 23 year-old Ms Ballantyne, from Lincolnshire, who has just completed a masters in earth science at Oxford University. She will have to deal by hand, all of the approximate 80,000 cards, which are mailed each year from the site, to more than 100 countries.

With that much post to deal with she may not have time to take in the thing she says she is most looking forwards to, and that is stepping on to Goudier Island and taking in the cacophony and pungent smell of the penguins, against the backdrop of the glaciers and Fief mountains.

Ms Bruzzone will be the base leader, managing the team and coordinating all ship visits to the island. The scientist, who has already spent three months in the Norwegian archipelago of Svalbard, on a separate Arctic expedition, described the opportunity as her “lifelong dream”.

The team will be joined by Vicky Inglis, who will help settle them in for the first 10 weeks. The 42-year-old from Aberdeenshire was a UKAHT general assistant in the 2019/20 season, but has started working for the charity full-time, from this summer.

Where is Port Lockroy?

Port Lockroy is a scenic bay on Goudier Island, which forms a natural harbour on the north western shore of the Palmer Archipelago, just west of the Antarctic Peninsula, of the British Antarctic Territory.

Most commonly associated with the former British base built there in 1944, it was actually discovered initially by French explorer Jean-Baptiste Charcot, during a 1903 to 1905 expedition. They named the area after the politician who helped to finance their voyages, Edouard LaCroix, hence Port Lockroy.

Between the years 1911 and 1931, the place was used primarily for whaling, but in 1944, towards the end of World War II, British Forces built several secret military bases in Antarctica, and Port Lockroy became Base A, the first of the more than 20 that were eventually created.

It became a scientific research station after the war years and continued to be so right up until 1962, when it was finally abandoned. Over time it fell into disrepair, but then in 1996, the decision was taken to restore the site to its original state, backed by the United Kingdom Antarctic Heritage Trust, who paid for the renovations.

Nearly 18,000 visitors descend on Port Lockroy each year and it is they who are responsible for the huge amount of post that Ms Ballantyne will be trying to keep on top of. The masses of postcards sent from the site get ferried once every two weeks to the Falkland Islands and from there onwards to the UK, regardless of where there final destination might be marked up for.

The souvenir gift shop and museum that most, if not all of the visitors wander around in their time at the site, and more to the point, the funds that are raised from any sales, pays for the maintenance of Port Lockroy, along with several other Antarctic monuments.

History lesson at the museum

The museum itself is a fascinating place. Bransfield House, or Base A, has been restored as a living time capsule or “Historic site” by UKAHA (UK Antarctic Heritage Trust). With its excellent signage, it is possible to meander through the old bunkroom, kitchen, genny shed & radio room and learn a lot about how the Fids – who were the people who worked for the Falkland Islands Dependencies Survey, and now referred to as the British Antarctic Survey – lived down on the Peninsula, during the period between the 1940’s and the 1970’s.

At one time the few small, uninhabited wooden huts, which were barely visible against the snow and rocks, and which were regularly blasted by ferocious winds, buried in deep snow, and cut off by sea ice for six months out of the year, were the only evidence that remained of mans presence and were in danger of disappearing for ever.

Now with the charity’s assistance they have been brought back into use and what is more, granted trust protection.

It might not be everybody’s idea of a holiday destination, but Port Lockroy is not only an important natural and historic environment, but also a destination for a good many from around the world with an interest in science and the environment, to come and learn more about the remarkable Antarctic.

The UKAHT team will continue to regularly study the impact of visitors to the site, as well as the area as a whole. This assists with regulating the number of visitors and ships to the region, and more importantly, imposing strict guidelines to ensure the immediate surroundings are properly cared for.

Christmas in the snow and ice

Five months for the new team will obviously take in Christmas, and no doubt the ladies will already understand that they will have to wait longer than everyone else for their presents; after all, a certain white bearded gentleman has got to travel from the North Pole to almost the South to make his deliveries.

That said, maybe just being in amongst the amazing landscape and sharing an incredible experience, will be gift enough for the brave foursome.