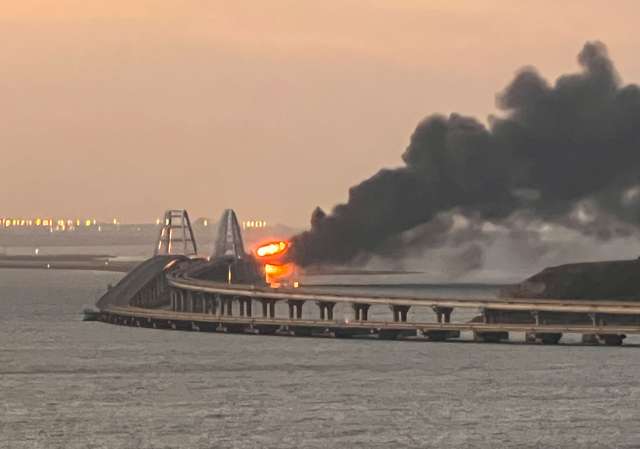 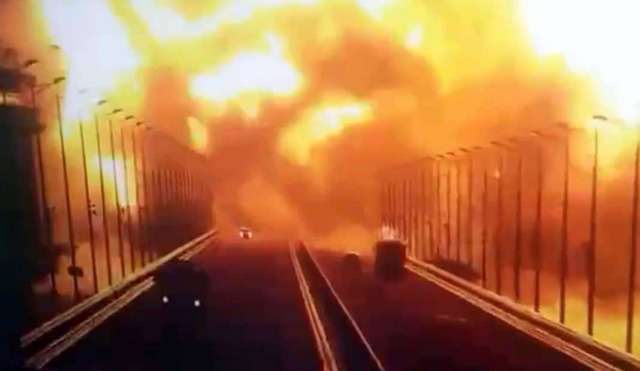 When a fight lasts for too long, the underdog might end up being the favorite in the contest. That has likely become the case in Ukraine as the once mighty and scary Russian army is gradually becoming the underdog, and the defensive Ukrainian army, once regarded as the underdog, is now the stronger of the two sides.

No day passes without Russia counting its losses in Ukraine. The latest of such losses was a blast hitting the Kerch Bridge in Crimea. The Bridge is the only link between annexed Crimea and mainland Russia. It is also the longest bridge in Europe.

A committee set up by the Russian government to investigate the incident said two bridge lanes partially collapsed.

“According to preliminary information, this morning on the automobile part of the Crimean bridge from the side of the Taman Peninsula, a truck was blown up, which caused seven fuel tanks to ignite on a train heading towards the Crimea peninsula,” the committee said.

The committee added that three people, traveling in a car, died after the truck exploded.

“The bodies of two victims, a man, and a woman, have already been recovered from the water and their identities are being established,” the committee said in a statement.

The Russian investigative committee said the exact cause of the explosion remains unknown. However, the body language of Ukrainians suggests that they could be responsible for the attack. From President Zelensky to ordinary Ukrainians seem excited about whatever happened at the longest bridge in Europe.

President Zelensky, in his nightly address on Saturday, said: “Today was a good and mostly sunny day on the territory of our state. The temperature was about 20 degrees and the sun shining. Unfortunately, it was cloudy in Crimea. But it was also warm.”

“Crimea, the bridge, the beginning. Everything illegal must be destroyed, everything stolen must be returned to Ukraine, everything belonging to the Russian occupation must be expelled,” Mykhailo Podolyak, an adviser to President Zelensky, tweeted.

“Air defense of the Russian Federation, are you sleeping?” Ukraine’s navy asked as it shares a video of the burning bridge on Facebook.

David Arakhamia, the head of President Zelensky’s party in parliament said: “Russian illegal construction is starting to collapse and catch fire. The reason is simple: if you build something explosive, sooner or later, it will explode. And this is just the beginning.”

Although Ukraine has not officially claimed responsibility for the attack, all fingers are pointing at it because it has in the past acknowledged that the bridge was a legitimate target.

“This is a necessary measure in order to deprive them (Russia) of the opportunity to provide reserves and reinforce their troops from Russian territory,” Maj. Gen. Dmytro Marchenko said.

The handiwork of Ukrainian vandals

Without mincing his words, the chairman of the State Council of the Republic of Crimea, Vladimir Konstantinov said the Ukrainians were responsible for the attack.

“Ukrainian vandals somehow managed to get their bloody paws on the Crimean bridge. And now they have something to be proud of, in 23 years of their economic activity, they did not manage to build anything deserving of interest in Crimea. But they did succeed in damaging the roadbed of the Russian bridge,” Vladimir Konstantinov said.

He said the incident would be thoroughly investigated and the damage will be repaired swiftly.

History of the Crimean Bridge

After Russia annexed Crimea in 2014, it began the construction of what later became the longest bridge in Europe, linking mainland Russia to Ukraine. The Kremlin spent a whooping sum of $3.7 billion on the project.

President Putin opened the bridge in 2018. It can handle 40,000 cars a day. It can also move 14 million passengers and 13 million tons of cargo each year.

Upon the opening of the bridge, the United States issued a statement condemning Putin’s action, describing it as a violation of international law.

“The bridge represents not only an attempt by Russia to solidify its unlawful seizure and its occupation of Crimea but also impedes navigation by limiting the size of ships that can transit the Kerch Strait, the only path to reach Ukraine’s territorial waters in the Sea of Azov,” the United States department of state said in 2018.

The Russian government has immediately begun repair works and restored the power supply at the bridge to enable the repair team to work round the clock. However, the question of whether Crimea is in Ukraine or Russia still depends on who you ask.