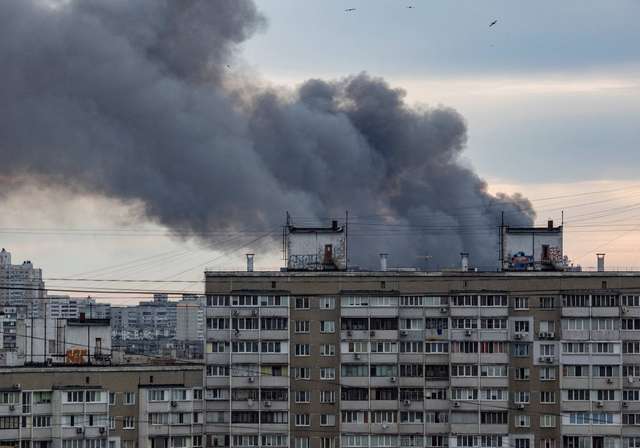 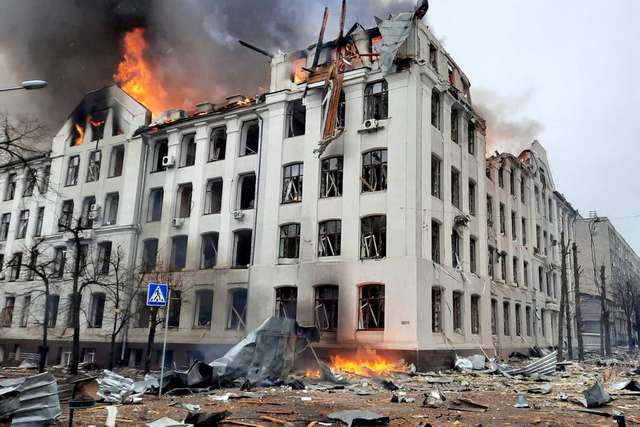 While the Ukrainians are gradually taking over their territories from the Russian invaders, the events of Monday suggest that a celebration of victory might be farther than they think.

Kyiv and other key cities in Ukraine woke up to massive strikes in what many described as the heaviest wave of attacks since the war started. Ukrainian officials said at least 84 missiles were fired at Ukraine, hitting infrastructures in 8 regions.

The Russian defense ministry said the strikes achieved all its objectives.

“All targets have been hit,” the ministry said.

There were explosions in Kharkiv, Zaporizhzhia, Zhytomyr, Ternopil, Lviv, Dnipro, and Kremenchuk. The cities are spread across eastern, central, western, and western Ukraine. Officials said at least 11 people died and many more were injured. The strikes also damaged power supplies in several parts of the country.

Ukrainian foreign minister, Dmytro Kuleba, said it would be impossible to talk Putin into peace and described the Russian leader as a “terrorist who talks with missiles.”

“Multiple Russian missile strikes across Ukraine. Putin’s only tactic is terror on peaceful Ukrainian cities, but he will not break Ukraine down,” Kuleba said. “This is also his response to all appeasers who want to talk with him about peace: Putin is a terrorist who talks with missiles.”

The strikes, a punishment for the Crimean bridge

“It was not possible to leave [Ukrainian attacks] unanswered. If attempts at terrorist attacks continue, the response from Russia will be severe and correspond to the level of threat,” Putin said on Monday. “Let there be no doubt about it.”

Putin said used high-precision, long-range weapons to attack military commands, communications facilities, and energy sources in Ukraine in response to the attack on the bridge.

President Putin had earlier described the attack on the bridge as an act of terror.

He said: There is no doubt that the attack was aimed at destroying the critical civilian infrastructure of the Russian Federation.”

Dmitry Medvedev, the deputy chairman of the Russian Security Council, ahead of the meeting on Monday said Russia should kill the “terrorists” responsible for the attack on the Crimean bridge.

“Russia can only respond to this crime by directly killing terrorists, as is the custom elsewhere in the world. This is what Russian citizens expect,” the former Russian president said.

Mykhailo Podolyak, an adviser to President Zelensky said it was cynical for Putin and Russia to accuse Ukraine of terrorism.

“There is only one terrorist state here and the whole world knows who it is,” Podolyak said.

The true face of Russia

Reacting to the multiple airstrikes by the Russian forces, Ukrainian President, Volodymyr Zelensky described Russia as a terrorist state that is killing the people of Ukraine.

“The world once again saw the true face of a terrorist state that is killing our people. On the battlefield & in peaceful cities,” President Zelensky said on Twitter. “A country that covers its true bloody essence & goal with talks about peace. It proves that the liberation of Ukraine is the only basis of peace and security.”

Mr. Zelensky said the Russians targeted places that would cause as much damage as possible.

The Ukrainian president said he had calls with leaders of different countries, including the President of Angola, the Prime Minister of the UK, and the Secretary general of the United Nations. He stressed the need for all to come together in response to the Kremlin.

So far, no nation has praised the airstrikes conducted by the Russian army. However, many world leaders have openly condemned the actions of the Russian government.

President Joe Biden once again vowed to make Russia pay for its crimes in Ukraine. He described the war as illegal and promised to stand by Ukraine until the end.

“We will continue to impose costs on Russia for its aggression, hold Putin and Russia accountable for its atrocities and war crimes, and provide the support necessary for Ukrainian forces to defend their country and their freedom,” Biden said.

The president of Finland, Sauli Niinistö, said the recent activities in Ukraine show how difficult it was for Putin to accept defeat.

“I have said that I found it very difficult to see that President Putin could acknowledge any kind of defeat. Is he capable [of] that? That is the question. And I think he is not capable of taking a defeat,” Niinistö said.

He described the Monday airstrikes as indiscriminate bombings targeting civilians and infrastructures important for civilians.

India, which has consistently maintained neutrality in the conflict, also released a statement condemning the Monday airstrikes.

The country’s Ministry of External Affairs spokesperson Arindam Bagchi said India was “deeply concerned” with the situation and called for the “cessation of hostilities and the urgent return to the of diplomacy and dialogue.”

“We reiterate that escalation of hostilities is in no one’s interest,” the statement said.

“India has consistently maintained since the beginning of the conflict that the global order is anchored in the principles of the UN Charter, international law, and respect for the sovereignty and territorial integrity of all states,” Bagchi added.

The Secretary-General of the United Nations, Antonio Guterres, said he is deeply shocked by the situation in Ukraine. In a statement released by his spokesperson, Stephane Dujarric said the missile strikes “constitute another unacceptable escalation of the war” and the civilians are paying the highest price.

“The Secretary-General is deeply shocked by today’s large-scale missile attacks by the armed forces of the Russian Federation on cities across Ukraine that reportedly resulted in widespread damage to civilian areas and led to dozens of people being killed and injured,” the spokesperson said.

Following the purposive strike on electricity facilities in Ukraine by the Russian army, the Ukrainian government has urged its citizens to limit the use of electricity. The prime minister of Ukraine, Denys Shmygal, said the airstrikes affected the electricity supply “in almost the whole of Ukraine.”

While electricity has been restored in some areas, others would have to wait till tomorrow before they can use electricity.

“It is important to reduce electricity consumption from 5 to 10 pm,” President Zelensky said. “This will ease the load on our power grid and reduce the need for emergency outages.”