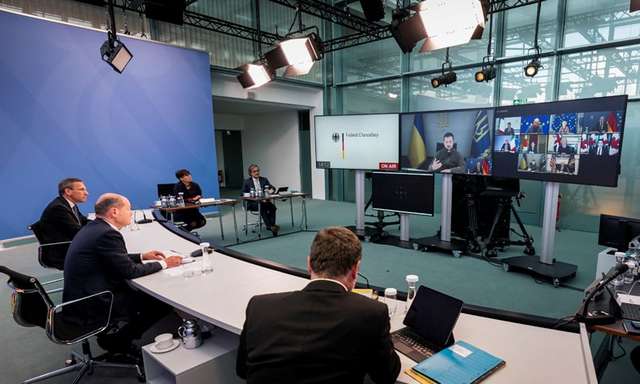 Following Russia’s bombardment of Ukraine on Monday, leaders of the seven countries that make up the G-7 held a virtual meeting with Ukrainian President, Volodymyr Zelensky, to discuss how best to help Ukraine defend itself against the attacking Russian forces.

Mr. Volodymyr Zelensky asked leaders of Canada, France, Germany, Italy, Japan, the United Kingdom, and the United States to provide air defense equipment for Ukraine so that it can shoot down Russian missiles, as Vladimir Putin “still has room for further escalation.”

“I am asking you to strengthen the overall effort to help financially with the creation of an air shield for Ukraine. Millions of people will be grateful to the Group of Seven for such assistance,” Zelensky said.

Monday and Tuesday were tough days for most Ukrainian cities after Russian missiles killed at least 19 Ukrainians and injured more than a hundred people across the country. President Putin said the bombardments were in retaliation for the attack on the Crimean bridge and warned of further escalation should Ukraine continue attacking “Russian territories.”

So far, Russia carried out 84 missile strikes on Monday, and 30 more on Tuesday. However, the Ukrainian military said it intercepted more than half of the missiles fired on Tuesday.

The call for more sanctions

Although Europe and most of the world are paying dearly for Ukraine’s invasion with dwindling economies, president Zelensky has called for more sanctions against Russia. He called on the leaders of the seven countries to ensure that Russia gets zero revenue from oil and gas.

“We must block its energy sector with sanctions, break the stability of Russian revenues from oil and gas trade,” Zelensky said.

He called for a tough price cap for the exports of oil and gas from Russia, which he described as a “terrorist state.”

G7 countries promise to stand by Ukraine until the end

In a joint statement released by the G7 leaders, they said they would continue to provide the needed assistance to Ukraine until the battle is won and promised to hold Russia accountable for its actions.

“We deplore deliberate Russian escalatory steps, including the partial mobilization of reservists and irresponsible nuclear rhetoric, which is putting global peace and security at risk,” the statement said.

The statement also warned that Russia would be met with severe consequences if it uses chemical, biological, or nuclear weapons against Ukraine. The G7 pledged continued “financial, humanitarian, military, diplomatic and legal support … for as long as it takes.”

However, there was no clear response to Zelensky’s demand to strengthen Ukraine’s air defense system, but there are indications that the United States could facilitate the movement of the needed equipment in the coming days.

The fears of a nuclear attack

In 1945, US atomic bombs hit two Japanese cities of Hiroshima and Nagasaki. One man that knows the effect of chemical weapons was at the G7 meeting with Zelensky. His name is Fumio Kishida, the prime minister of Japan. He is from Hiroshima.

Mr. Kashida warned that the nuclear threats by the Russians should not be taken lightly but should be given serious and close attention.

Something that has become clear recently is that both Russia and Ukraine want an end to the war soonest. However, Russian foreign minister, Sergey Lavrov, said contrary to claims by the US that Moscow has refused a negotiation, it was open to dialogue with the west on Ukraine but has not received any serious proposal.

“This is a lie. We have not received any serious offers to make contact,” Lavrov said.

“We have repeatedly said that we never refuse meetings. If there is a proposal, then we will consider it,” Lavrov added.