On Thursday, Ukraine hosted leaders of the three most powerful countries in Europe. They are the leaders of France, Italy, and Germany. All three leaders started their journey at midnight in Poland and arrived in Kyiv, the capital of Ukraine, in the early hours of Thursday.

Many believe that the purpose of the visit was to appease Zelensky after the Ukrainian President called out the leaders for trying to appease Putin and pointed out their lack of support for Ukraine in the ongoing war.

After arriving in Ukraine, President Macron of France said the purpose of the visit was to show solidarity with the people of Ukraine.

“I want to be in support and at their side,” Macron said.  He said the purpose of the visit was to send “a message of European unity addressed to Ukrainian men and women, of support to talk about both the present and the future because the coming weeks, we know, will be very difficult weeks.”

Earlier this month, Macron cautioned against humiliating Russia. He said, “We must not humiliate Russia so that the day when the fighting stops we can build an exit ramp through diplomatic means. I am convinced that it is France’s role to be a mediating power.”

After Macron arrived in Ukraine, he defended the statement with reference to World War I and World War II.

“We are side by side today with Chancellor Scholz. One hundred years ago, we were at war and our allies helped France win. France committed a historic mistake. It lost the peace because it wanted to humiliate Germany. The question of humiliation I always placed in a context to come, not the current context,” he said.

Reacting to Macron’s statement about humiliating Russia, Zelensky told Financial Times: “in order to be a leader, you do not need to consider yourself one, but to behave as a leader.”

Earlier this week, President Zelensky said the German Chancellor should choose between Russia and Ukraine. He said the German “government must choose not to do a balancing act between Ukraine and the Russian Federation, but to choose which is their priority.”

The three leaders have now reassured Ukraine of their support during the visit. “Today, this war must be won. France clearly supports Ukraine so it prevails. Germany, like France, will never be in situations where they negotiate on Ukraine’s behalf with Russia. Moreover, we have never done that,” Macron said.

One issue discussed during the visit was Ukraine’s EU membership. All three leaders assured Ukraine’s President of their support in the country’s bid to join the European Union.

“The Ukrainian people defend every day the values of democracy and freedom that are the basis of the European project, of our project. We cannot delay this process,” Italian Prime Minister Mario Draghi said.

German Chancellor Scholz said that Ukraine “belongs to the European family.” He added that all candidates had to fulfill ascension criteria concerning democracy and constitutional law.

Macron also assured Zelensky of Europe’s support. He said, “Europe is by your side, it will remain so as long as necessary until the victory is achieved, a victory which will see the return of peace in a free and independent Ukraine.”

Ukraine has applied to be a member of the European Union. Some European countries are uncomfortable with the move, and visits like this could convince such nations to support Ukraine’s membership. The EU is set to decide on Ukraine’s future in a few days.

Since the war began, Ukraine has constantly demanded arms. Many European countries and the United States have supplied ammunitions worth billions of dollars to the warring nation. However, Ukraine is still asking for more.

During the visit, President Zelensky demanded more weapons to defend his country.

“There is a direct correlation: the more powerful weapons we get, the faster we can liberate our people, our land,” he added.

The leaders also visited Irpin, close to Kyiv, where many civilians died during the intense fight. Macron said he saw signs of “war crime.” The leaders commended the courage of the Ukrainian armed forces and their ability to fight against the Russian soldiers. 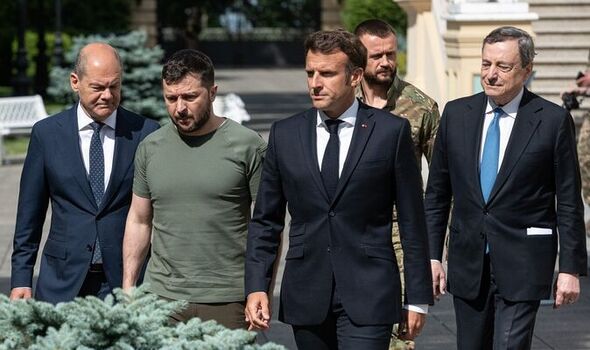