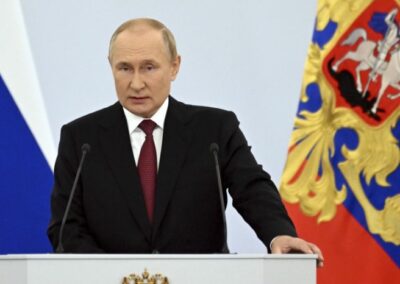 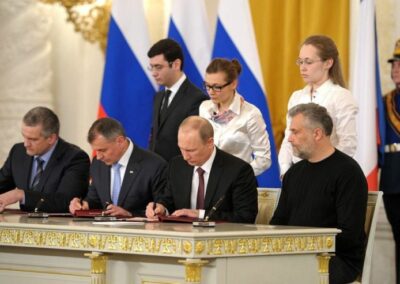 Putin is currently trending on Twitter. His name is arguably the most mentioned in the world today. What could he have done? He has once again exercised a right he possesses that every other world leader lacks, the power to annex the territories of another country.

In his speech, President Putin said the peoples of the four regions are now parts of Russia “forever.”

“I want the Kyiv authorities and their real masters in the West to hear me. For everyone to remember. People living in Luhansk and Donetsk, Kherson, and Zaporizhzhia are becoming our citizens. Forever,” President Putin told the crowd.

“There is nothing stronger than the determination of these people to return to their true historical fatherland,” Putin added, describing the fighters in Ukraine as heroes.

In all of Putin’s remarks, he said something that suggested that he was now ready to end the so-called special military operation. He called on Ukraine to drop its arms and  “sit down at the negotiating table.”

“But we will not negotiate the choice of the people. It has been made. Russia will not betray it,” Putin stated.

Putin’s remarks suggest he is now ready to accept the outcome of the war after annexing the four regions. In all, Russia has annexed five Ukrainian territories after annexing Crimea in 2014.

A battle for supremacy with the west

It is no longer a new story that the war is not only between Russia and Ukraine. President Putin believes the purpose of the fight is to break the powers of the West as it tries to dominate the world. Putin said it was Russia’s destiny to stand in its way.

“The West has been looking for and continues to look for a new chance to weaken and destroy Russia, which they have always dreamed of splitting our state, pitting peoples against each other,” he said.

“It will no longer be like before. The battlefield to which fate and history have called us is the battlefield for our people, for great historical Russia,” Putin continued, saying that the fight against the west was irreversible.

Zelensky vows to reclaim every inch of Ukraine

Soon after Putin’s decree signing, the President of Ukraine, Volodymyr Zelensky, described it as a farce and vowed to liberate the entire country.

“The entire territory of our country will be liberated from this enemy – the enemy not only of Ukraine but also of life itself, humanity, law, and truth,” Zelensky said on Friday.

Zelensky said President Putin hurriedly annexed the regions because it could feel the fast-approaching strength of the Ukrainian army. He added that Ukraine would not accept Putin’s attempt to rewrite the country’s map and history.

President Zelensky said he was ready to negotiate with Russia, but such negotiations would not work out under Putin but with another Russian President.

As expected, the US and its allies vowed never to accept the four Ukrainian regions as parts of Russia. In a statement released by President Joe Biden on Friday, the president of the United States swiftly rejected Russia’s annexation of the Ukrainian regions.

“I urge all members of the international community to reject Russia’s illegal attempts at annexation and to stand with the people of Ukraine for as long as it takes,” Putin added.

The US secretary of State, Anthony Blinken, said the United States was imposing visa restrictions “on 910 individuals, including members of the Russian Federation military, Belarusian military officials, and Russia’s proxies for violating Ukraine’s sovereignty, territorial integrity, and political independence.”

Prime Minister of the United Kingdom Liz Truss said the UK would not accept Russia’s decision to annex Ukrainian territories.

“Vladimir Putin is once again violating international law with his threats to annex more of Ukraine. We will not hesitate to take further action, including imposing more sanctions to cripple Putin’s war machine,” Liz Truss said on Twitter.

“We will ensure he loses this illegal war,” she added.

Like Truss, the immediate prime minister of the UK, Boris Johnson, who is described as the darling of Kyiv, said the world should reject the “sham referendums.”

“Vladimir Putin your speech is a fraud and a disgrace. The world must never accept your sham referendums or your cruel and illegal attempt to colonize Ukraine. We stand with the people of Ukraine and will support them without flinching until their country is whole and free,” Boris Johnson tweeted.

The European Union also refused to accept the four regions as parts of Russia. In a statement released by the President of the EU,

We firmly reject and unequivocally condemn the illegal annexation by Russia of Ukraine’s Donetsk, Luhansk, Zaporizhzhia, and Kherson regions,” the EU president said in a statement.

“We do not and will never recognise the illegal ‘referenda’ that Russia has engineered as a pretext for this further violation of Ukraine’s independence, sovereignty and territorial integrity, nor their falsified and illegal results,” the statement added.

The EU said it would continue to stand with “Ukraine and will continue to provide strong economic, military, social and financial support to Ukraine for as long as it takes.”

Other world leaders, including the prime ministers of Japan, Latvia, Belgium, and Finland, have publicly condemned Russia’s action. As of now, no world leader has publicly taken sides with Russia, including its close ally, Russia.