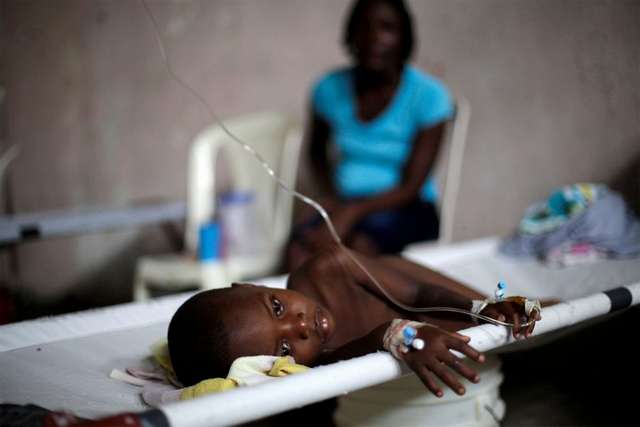 The World Health Organization (WHO) has come in for criticism over its reports of a cholera outbreak in Haiti.

Agricultural sciences expert Evicarles Cadet has blamed the international community for the French-speaking country’s problems saying that only Haitians can solve them.

“It’s only when Haitians become aware that it is up to them, and them alone, to take the country’s destiny into their hands and change what needs to change. We cannot leave the country in the hands of modern settlers who want to enslave us until now or to use us as a workforce for other countries,” Cadet told the Jamaica Observer.

The country’s largest fuel terminal remains under the control of gangs, the government has terminated fuel subsidies and increased the price of fuel while more than 225 people have been killed in gang feuds in the past four months.

Last week there were 32 confirmed cases of the virus and 16 recorded deaths so far.

The government had extended an appeal to the international community to help deal with Haiti’s ongoing crisis, with the WHO calling for the deployment of a special international armed force to help the country.

“We certainly need help to develop our country but we don’t need boots” on the ground, AFP quoted one protester who charged that the international community was “interfering in the internal affairs of Haiti”, and that the Government had “no legitimacy to ask for military assistance”.

“The situation was already chaotic because of the level of misery and the rate of inflation. Since the rise in the price of gas, the situation has gone from bad to worse.

“Basic necessities are becoming increasingly rare and therefore, more expensive, especially for the most vulnerable populations. In rural areas, food is scarce because goods cannot be transported there because of the scarcity of gas. In the block-out areas, like in the capital, many people are without food and water,” he explained.

“In some areas, like those controlled by gangs in the capital and its surroundings, people are afraid to go out, but it’s not the case of the general population. In the provincial towns, as well as in the capital, there are protest movements against the high cost of living, the price of gas, the resignation of the prime minister, foreign interference, et cetera. But this doesn’t prevent the population, in some specific time, from going out and getting what they can afford for their needs,” Cadet added.

Addressing the issue of the WHO’s declaration of a cholera outbreak, Cadet said, “Can we really talk about cholera as an outbreak? Can the prevalence of cases found be considered an outbreak? There’s a lot of questions to ask about the motivation of the WHO on this unreal outbreak because the environmental situation of the country, which is deteriorating day by day, has always caused cases of diarrhea like it is the case today,” he told the Sunday Observer.