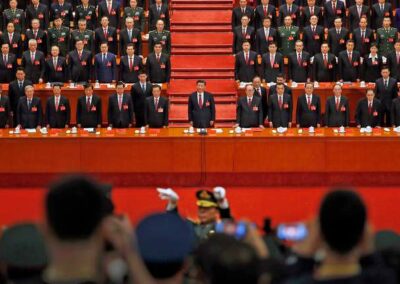 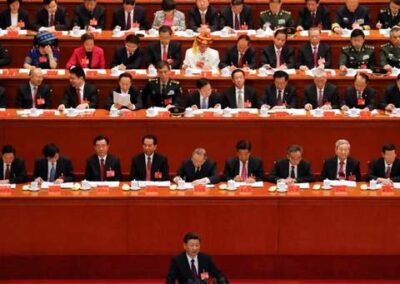 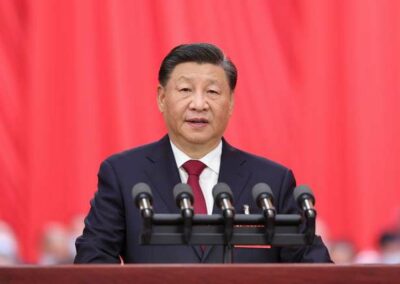 For 2 hours, delegates of the Chinese Communist Party listened to President Xi Jinping as he breaks down the achievement of his government in the last ten years. The 69-year-old, who is looking to get another term as president, defended his recent actions, including the zero Covid policy and the plan to compel Taiwan to become part of China.

The weeklong congress witnessed the gathering of more than 2,300 delegates in the Great Hall of the People at Tiananmen Square in Beijing. When it comes to an end, the country will know if Xi Jinping will continue as President.

Here is a look at what President Xi said in his two-hour speech.

Retaking Taiwan at all cost

As in previous times, the Chinese President once again reaffirmed his commitment to the “complete reunification” of Taiwan and mainland China, either through diplomacy or the use of force.

“We will continue to strive for peaceful reunification with the greatest sincerity and the utmost effort, but we will never promise to renounce the use of force, and we reserve the option of taking all measures necessary,” President Xi said on Sunday.

“The complete reunification of our country must be realized and it can without a doubt be realized,” Xi added.

Military pressure on Taiwan has increased drastically in the past year as the Communist party would not allow the Island country to stay on its own until it rejoins mainland China. The plans to reunify the two countries have adversely affected US-China relations, as the United States continues to provide military support to Taiwan.

Xi’s comment is an indication that if he gets another term as President, reuniting with Taiwan would be one of his main agendas.

In June 2020, China passed a national security law, banning Hong Kong from terrorism, secession, subversion, and collaboration with foreign countries. The purpose of the new law was to curb the growing anti-government demonstrations and install leaders loyal to the Chinese Communist government.

“In the face of turbulent developments in Hong Kong, the central government exercised its overall jurisdiction over the special administrative region as prescribed by China’s Constitution and the Basic Law of the Hong Kong Special Administrative Region,” President Xi said, adding that “it ensured that Hong Kong is governed by patriots.”

“Order has been restored in Hong Kong, marking a major turn for the better in the region,” Xi added.

Since the enactment of the law, it has forced several media houses to close and opposition leaders jailed. Pro-democracy activists have fled the country for fear of being clamped down by the leaders loyal to Xi Jinping.

The United States and other western countries have criticized the Chinese government for ruling the former British colony with an iron fist. But for Xi Jinping, it is an achievement to have a firm grip on Hong Kong.

Despite the growing dissatisfaction with Xi Jinping’s zero Covid policy, the Chinese leader on Sunday insisted that it was the best way out of the deadly virus.

“In responding to the sudden attack of Covid-19, we put the people and their lives above all else and tenaciously pursued a dynamic Zero Covid policy,” President Xi continued. “We have protected the people’s health and safety to the greatest extent possible and made tremendously encouraging achievements in both epidemic response and economic and social development.”

No doubt, the zero Covid policy has kept the death toll at its lowest point since the virus began spreading in Wuhan, China. However, there is growing dissent against the policy, but President Xi is not backing down as he feels the country cannot afford another wave of the virus.

It is a known fact that the Chinese military is one of the strongest anywhere on earth. However, the Chinese leader admits the need to boost the capabilities of the People’s Liberation Army by shifting to the use of modern technologies.  President Xi said it is his goal to modernize the army by 2027.

He said: “We will intensify military training under combat conditions across the board to see that our armed forces can fight. We will innovate new military strategic guidance and develop strategies and tactics for people’s war, establish a strong system of strategic deterrence, increase the proportion of new domain forces with new combat capabilities, and intensify military training under combat conditions.”

In recent times, the Chinese military has undergone major reforms, including hardware upgrades and the ground forces reduced to make way for advanced technologies.

President Xi, who is likely to be returned as President, said he will continue the reforms to strengthen China’s defense.

President Xi is one of the few leaders matching words with actions as he looks to play his role in the fight against climate change. Although the war in Ukraine has affected the resolve of the Chinese leader, who is now focused on energy sufficiency, he reaffirmed his commitment to play his role in discarding what he described as “the old.”

President Xi said: We will work actively and prudently toward the goals of reaching peak carbon emissions and carbon neutrality.

“Based on China’s energy and resource endowments, we will advance initiatives to reach peak carbon emissions in a well-planned and phased way, in line with the principle of getting the new before discarding the old,” he added.

President Xi’s goal to preserve the environment led to a cut in air pollution, especially in the urban areas of China. He vowed to make the world’s most populous country reach net-zero emissions in 40 years. But the Russian-Ukraine war has sent energy prices to the roof, forcing China to push the serious issue of climate change to second place, and prioritize energy sufficiency.

Like in previous speeches, President Xi has once again prioritized economic development over national security.

President Xi has always maintained that his top priority is growing the Chinese economy to compete with other world-leading economies. Some analysts believed the Chinese leader would strike a balance between security and the economy owing to the growing security threats across the world.

He, however, stressed that it is “impossible to build a socialist modern strong country in all aspects without solid material and technology foundation.”

A congress that will make Xi Jinping a President for life

It has become almost certain that President Xi will get a third term as president. Many believed the over 2000 delegates at the congress were hand-picked by the leader, and it is unlikely he will not continue as President. In 2018, he amended the constitution of the Communist Party to abolish the two-term limit for the President.

If President Xi gets a third term, he will likely become infallible, as he has acquired most of the country’s powers for himself. His rule as president has been described by some as a one-man rule.

Lynette Ong, professor at the Munk School of Global Affairs & Public Policy, said: “We can be almost certain that Xi, as the Communist Party’s general secretary, will be appointed for another five-year term.”

“Technically speaking, since the term limit has been removed, he can stay in power for life,” he added.