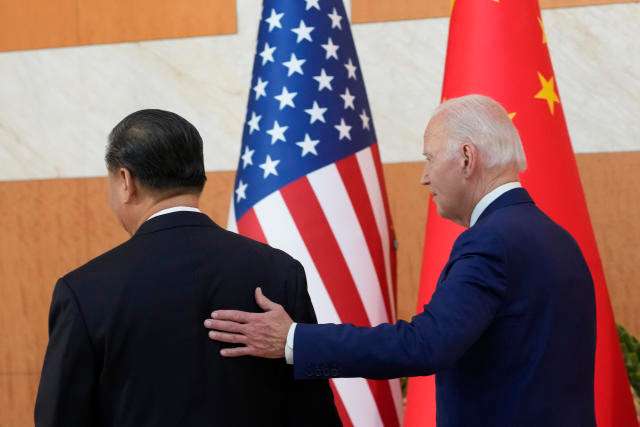 President Xi Jinping of China and Joe Biden have met for the first time since the latter became president of the United States. For the past two years, the relationship between the two world’s largest economies has grown farther apart as both sides continue to criticise each other’s handling of major issues.

The two leaders held a bilateral meeting in Bali, Indonesia, at the ongoing G20 Summit, with Biden and Xi admitting that there are significant differences between the two countries that need urgent attention.

“As leaders of our two nations, we share responsibility, in my view, to show that China and the United States can manage our differences, prevent competition from becoming anything ever nearing conflict and find ways to work together on urgent global issues that require our mutual cooperation,” Biden said at the start of the meeting.

“The world expects, I believe, China and the United States to play key roles in addressing global challenges,” he added.

On his part, the Chinese president seems to be careful with his words but not with his message. In what many believe to be constructive criticism of the US president, Xi Jinping said: “A statesman should think about and know where to lead his country. He should also think about and know how to get along with other countries and the wider world.”

“Currently, the China-U.S. relationship is in such a situation that we all care a lot about it because this is not the fundamental interests of our two countries and peoples and it is not what the international community expects us,” President Xi stated.

The two leaders discussed several issues, including the Ukraine-Russia war and the differing interpretations of Taiwan’s one-China policy between the two countries.

A meeting between Joe Biden and Xi Jinping cannot end without a discussion on Taiwan and the one-China policy. While China believes that Taiwan does not have the right to declare independence, the US has continuously maintained that it would defend Taiwan should China invade the Island.

President Xi, during Monday’s meeting, warned the US not to cross the red line concerning Taiwan. He said: “We hope that the US side will match its words with action and abide by the one-China policy and the three joint communique.”

President Biden, during the meeting, maintained that the United States wanted both China and Taiwan to maintain the status quo as the world is interested in maintaining peace and stability in the Taiwan Strait.

“[Biden] raised U.S. objections to the PRC’s coercive and increasingly aggressive actions toward Taiwan, which undermine peace and stability across the Taiwan Strait and in the broader region and jeopardize global prosperity,” a readout of the meeting says.

While the United States had continuously maintained that it was ready to defend Taiwan militarily, China considers such a move a threat to its sovereignty, and it is the US way of destabilizing the Chinese market.

Hence, President Xi said: “President Biden has said on many occasions that the US does not support ‘Taiwan’s independence and has no intention to use Taiwan as a tool to seek advantages in competition with China or to contain China. We hope that the US side will act on this assurance to real effect.”

It is not new that the United States has continually accused China of violating human rights. During the meeting, president Biden also mentioned the People’s Republic of China’s human rights violation “practices in Xinjiang, Tibet, and Hong Kong.”

In reply to the US president, Xi defended his country’s human rights record and its style of leadership. He said China operates its style of democracy that fits its national conditions. The leader, who recently got a record third term, acknowledged that there are differences between the governing systems of the two countries, but that should not affect their relationship.

“Neither side should try to remould the other in one’s own image or seek to change or even subvert the other’s system,” the Chinese readout said. “Instead of talking in one way and acting in another, the United States needs to honor its commitments with concrete action.”

“The Chinese nation has the proud tradition of standing up for itself. Suppression and containment will only strengthen the will and boost the morale of the Chinese people,” the Chinese readout added.

Although China has not openly admitted to supporting Russia in the ongoing Ukraine war, there are indications that it is closer to Kremlin than Kyiv. The United States, on the other hand, outrightly supports Kyiv.

While the two sides have not reached on consensus on the war, they agreed on one thing during the meeting. They both agreed that the use of nuclear weapons should not be an option, there will be no winner in a nuclear war.

“President Biden and President Xi reiterated their agreement that a nuclear war should never be fought and can never be won and underscored their opposition to the use or threat of use of nuclear weapons in Ukraine,” the US readout of the meeting said.

Despite the differences between the two countries and their leaders, the communication lines between them have never been closed. In recent times, both leaders have held a series of meetings via video conferencing.

Biden and Xi promised to keep the communication lines open as they continue to see ways to improve the staggering relationship between the two sides.

“The two leaders agreed that Secretary of State Blinken will visit China to follow up on their discussions,” the readout stated.

President Biden also stressed the need for both countries to have discussions on climate change and other transnational issues. While they were yet to come to a consensus on the various issues, the meeting has no doubt raised hopes that the two biggest economies can get along once again.