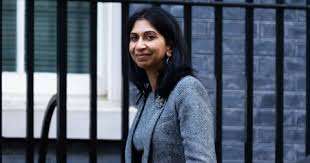 The UK government lurched into yet another shambolic episode today when Home Secretary Suella Braverman resigned from her position, following an admission of a mistake that in her own words “constituted a technical infringement of the rules”, when she sent an official document from a personal email account. She had only been in the job for six weeks and becomes the second minister to leave the new government of Liz Truss, after Kwasi Kwarteng was asked to stand aside as Chancellor, at the end of last week.

Her departure adds further chaos to a party that is fast becoming a laughing stock, at a time when the government is in desperate need for a show of unity and a period of stability, with the country facing an economic crisis that simply worsens by the day.

Had been in running for top job

Ms Braverman, had been the attorney general, or in other words the government’s chief legal advisor, under Boris Johnson, and was responsible for overseeing all the UK borders, and policing the country, including all counter-terrorism. She had in actual fact run for leadership when Mr Johnson resigned in the summer and had pledged to cut taxes and stand up to all the “woke rubbish”, but had been eliminated in the second round of votes.

Resignation was the right thing to do

In her resignation letter to the Prime Minister she emphasised that surrendering her post was the “right thing to do” when a mistake is made. Apparently she had sent a draft Written Ministerial Statement, which was due for publication imminently, to a trusted parliamentary colleague from her own email account, with the aim of garnering support for government policy on migration.

Even though a lot of its content had already been briefed to other MP’s, as soon as she realised her error she reported it to the Cabinet Secretary and felt duty-bound to tender her resignation. The information did not amount to a breach of national security, but it was potentially market sensitive as it did contain government policy, a Downing Street source said.

Ms Braverman pointed out that the business of government relies upon people accepting responsibility for their mistakes, which seemed something of a concealed criticism of the PM after her own full U-turn the previous week on her economic plan. She added: “carrying on as if everyone cannot see that we have made mistakes and hoping that things will magically come right is not serious polities.”

She then went on to express her concerns about the direction the government was heading in, highlighting that they had broken key pledges which had been promised to the voters of the UK; and she questioned the Government’s commitment to honouring manifesto commitments, such as reducing overall migration numbers, and stopping the illegal migration practices, particularly the dangerous small boat crossings. After becoming the shortest serving home secretary since World War Two, having been in the job for only 43 days, she said she was leaving with regret and wished her successor the best of luck.

Responding, Ms Truss accepted the resignation saying that she respected the decision and agreed that it was important that the Ministerial Code was upheld, and that Cabinet confidentiality was always respected.

She thanked Ms Braverman for her service and gave special mention to her role in overseeing the largest ever ceremonial policing operation, when thousands of officers were deployed from forces across the United Kingdom to ensure the safety of the Royal Family and all those who gathered in mourning for Her Late Majesty The Queen. She closed by stating her gratitude for the work Ms Braverman had put in on the Northern Ireland Protocol Bill, and wished her well for the future.

Shortly afterwards it was announced that Grant Shapps would take on the position of Home Secretary, which incredibly comes just a matter of weeks after the PM sacked him as Transport Secretary, after he supported Rishi Sunak in the battle for Number Ten in this summer’s leadership race.

The Labour party’s shadow Home Secretary Yvette Cooper said the government was “falling apart”, adding: “To appoint and then sack both your Home Secretary and Chancellor within six weeks is utter chaos”; whilst the Liberal Democrat MP Alistair Carmichael said: “The only solution now is a general election.”

Possible revolt on the way

It does seem astonishing that less than two months into the job Ms Truss is battling to stay as PM and the smart money is suggesting she faces a mass revolt after the 31 October when her new Chancellor Jeremy Hunt publishes independent forecasts for the UK’s economic outlook, by the Office for Budget Responsibility (OBR). He will also set out details of spending cuts and possible tax rises, which he has already hinted at.

It looks like there is no way back for the Prime Minister, with her support waning rapidly, she may be forced out even before the end of the year. That in itself seemed an impossibility just a matter of weeks ago, but after the year the conservatives have had nothing is out of the question.