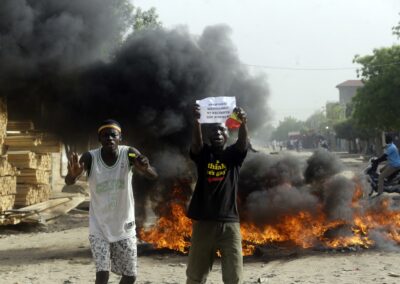 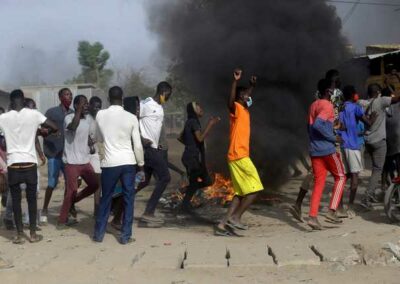 At least 60 people have died in Chad after Chadian security forces opened fire on protesters that took to the streets to demand a transition to democratic rule. Over 300 others have sustained injuries. Among those dead are the 10 security forces and a journalist.

The country’s Prime Minister and former opposition leader, Saleh Kebzabo, said the government was still compiling casualties from the demonstrations which he described as an “armed insurrection.”

The prime minister said almost all the deaths occurred in the capital N’Djamena and the cities of Koumra and Moundou. He also announced a night-time curfew until order was restored in the cities.

The security forces were said to have fired live bullets at the protesters after the demonstrators took over the streets and some government buildings. Saleh Kebzabo said the deaths were caused by violence that broke out on the protest grounds, and the security forces only responded in self-defense.

“What happened today is an armed popular uprising to seize power by force and those responsible for this violence will face justice,” the new prime minister said.

“The demonstrators had firearms and they are considered rebels. The security forces responded only in self-defense,” Kebzabo added.

Despite the government’s claim that the protesters were violent and not peaceful, human rights groups have accused the government of cracking down on the protests and firing live bullets at the crowds.

Lewis Mudge, Central Africa director at Human Rights Watch, said: “It’s clear that an impartial investigation is needed to determine if protesters resorted to looting and violence and if security forces unlawfully resorted to lethal force across the country.”

Abdoulaye Diarra of Amnesty International said that based on eyewitness accounts and the examination of the photos and videos, the security officials used live bullets on protesters.

The United Nations strongly condemned Thursday’s violence and called for a thorough investigation of the matter.

“We deplore lethal use of force against protesters in Chad. Transitional authorities must ensure the safety and protection of human rights, including freedom of expression & peaceful assembly. Reported violations must be investigated,” the UN human rights office said on Thursday.

“We call for calm & all sides to show restraint,” it added.

Demanding an end to the Deby dynasty

The protesters in Chad are demanding an end to the over 30 years of the Deby dynasty. In April 2021, President Idris Deby died after sustaining injuries from fighting against rebels.

Since his death, the Central African country has been ruled by his son, Mahamat Idriss Deby, after the military proposed an 18-month transition to the election. The son of the former leader said he will not be contesting the elections after the transition period.

Although the government banned the protests citing security reasons, the protesters defiled the orders and took to the street. Some eyewitnesses believe that the death toll could have surpassed 100.