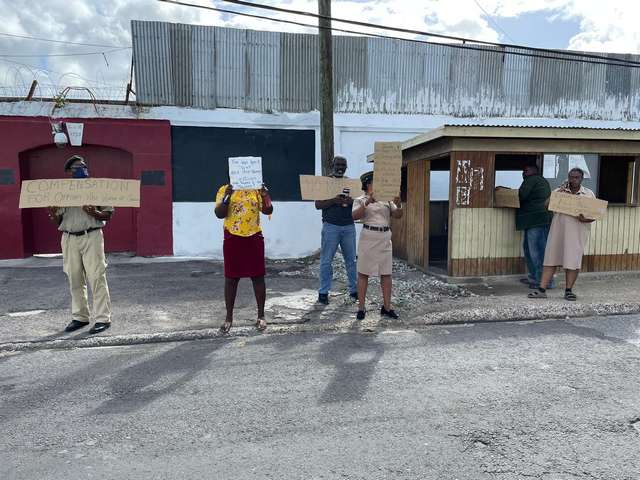 Prison officers who protested for two consecutive days over better working conditions and other issues say they are being victimized because of the stance they took last week.

Junior Officer Jones who was part of a handful of prison workers protesting outside of His Majesty’s Prison on October 17th and 18th says many of those who participated in the industrial action is being victimized.

Last week the officers gathered outside the penal institution, voicing their dissatisfaction over a myriad of issues including inadequate risk allowance, health, and safety concerns, and better working conditions.

During an interview with Leader of the United Progressive Party (UPP) Harold Lovell on his Captain’s Corner program, officer Jones recounted an incident of victimization leveled against a protesting officer.

“We are facing a great deal of victimization, we had an officer who came out on the first day to take a stand who is also pregnant, she was refused a pass because one officer had already taken a gate pass. The pregnant officer decided that she is going to take industrial action and they opened the gate for the vehicle to leave and she came out with the vehicle. Once we finish our industrial action and she was returning to duty she was told by the gate people that the superintendent says that she is not allowed back on the compound,” she says.

Jones said she instructed the officer to go home and return the next day [Tuesday] to take up duty at six.

“When she arrived at six o’clock the following day she was again denied access into the prison because she took up process outside, taking industrial action against the ills that are going on inside the prison,” the junior officer recounted.

She added that the officers have been failed by its union representative and the government by extension.

“We have the Antigua Trades and Labor union which governs non-establish government personnel, but to be frank, they have failed us. Mr. George has failed us, the Permanent Secretary is failing us, the Minister [of National Security] has abandoned us, we have no help this is why we are outside on the sidewalk crying out.”

She noted that several other officers like to voice their displeasure at how they are being treated, but they are fearful that they too will be victimized.

” A lot of the officers would like to come out and protest but some of them are foreigners and they are threatened. their jobs are threatened if they go on the line to take industrial action with what is going on in the prison. That cannot be right, the vocal prison officer stated.

Meanwhile, the UPP leader says it is every individual has a right to protest

“That is against the Antigua Barbuda Labor Code, it is completely against all conventions that we know, cause there is always a right to protest and there is a procedure, but the right to protest cannot be taken away. I don’t know what the Antigua Trades and Labor union would say, but based on what we have heard it seems to me as though they need to be more engaged,” Lovell said.

He added that a change of government is needed to address the concerns at the prison.

“We need to get a change, a change in administration so that we can fix these problems without this type of hassle that the officers have to go through. The solution to this is that we have to get rid of them,” the UPP leader stated.

National Security Minister Steadroy Benjamin confirmed last week that work is underway to address matters at HMP in a “strategic and systematic manner”, which includes the general prison environment and allowances that are owed to prison officers.

Works Minister Lennox Weston supported his colleague, saying that the plan to retrofit the entire penal institution would be done in stages.

Weston said that a facility where 180 prisoners could be housed was recently completed and another phase has begun with the aim of finishing it before the end of the year.