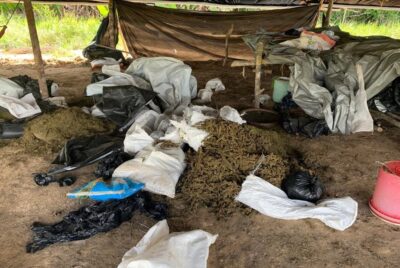 Police in Guyana say they have discovered thousands of marijuana plants on a farm there during a narcotics eradication exercise on Friday.

During the exercise, in the DeVeldt Savannah in the Berbice River one marijuana farm, two camps and two drying areas were located.

According to reports, the farm measured about four acres, with about 20,000 cannabis plants measuring from six inches to two feet in high.

A 37-year-old farmer of Stewartville, West Coast Demerara and Wiruni Berbice River, was found on the farm attending to the cannabis plants, and he was arrested.

Police say when they conducted searches on the second camp, a 12-gauge shotgun along with four live 12-gauge cartridges were found.

“Searches were then conducted on the two drying areas and a quantity of dry cannabis was found with an estimated weight of about 800 pounds. The estimated weight of the cannabis plants is 400 pounds. The total street value of the cannabis found during the operation is $489,000,000… Several farming tools and a spray can was also found in the camp. The plants, camps and drying areas, farming tools and the spray can were all destroyed by fire,” according to media reports.

The farmer is currently in police custody assisting lawmen with their investigations.