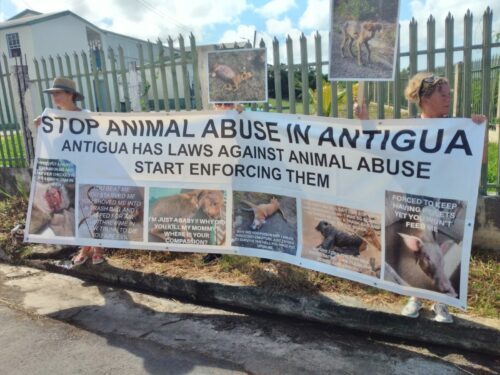 Animal activists are mounting pressure on legislators to enforce the laws concerning animal cruelty in Antigua and Barbuda.

According to the protection of animals act, if any person shall cruelly beat, kick, illtreat, override, overdrive, overload, torture, starve, infuriate or terrify any animal, such person shall be guilty of an offense of cruelty, and shall be liable upon summary conviction to a fine not exceeding $1500. The law states that could be imprisoned for six months as well.

But Founder of Dogs and Cats Antigua Joy Farrell says these laws are not being enforced.

On Monday, aminal activities raised placards outside of parliament, calling for the government to “do something about the abuse of dogs”

They were protesting as legislators were inside Palirmanet debating several bills.

Aminal cruelty is a crime in the twin island state but many dogs and even cats have been willfully killed by residents. Some suffer gruesome violence like being burnt, smashed on the road, hit by cars, shot by police, and most commonly poisoned.

“Perpetrators should be prosecuted under the laws of this country,” Farrell.

She said, “we want to believe that these are wonderful, intelligent, compassionate people. I hope that most people don’t want to see animals abused but unfortunately animals are abused every single day,”.

“We are on the front line and we have to watch it and we are saying that we had enough. We are protesting the fact that we have laws on the books but the law enforcers don’t enforce the laws”, she said.

She likened poisoning dogs in Antigua and Barbuda to the “wild wild west”, saying that other acts like badly bruising animals by having them tied with chains and ropes is another major issue

“This is wrong…We do not want to be on the wrong side of history when people look back and say what kind of people were they to allow this kind of abuse to happen and do nothing. We cannot continue to abuse animals with impunity and do nothing about it,” she said