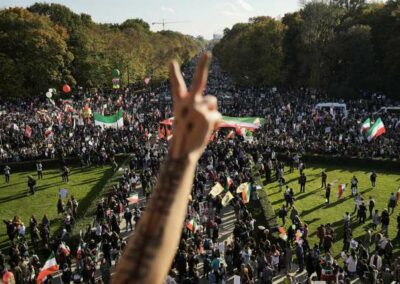 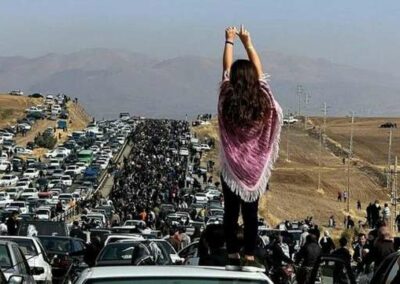 It was a locust of people. Some say they were up to 100,000. Others say they were about 50,000, while some say they cannot be more than a few thousand. No matter how many they were, the crowd that gathered in the Kurdish city of Saqqez on Wednesday defiled all threats to mark the 40-day anniversary of Mahsa Amini’s death. She died last month while in the custody of the Iranian Morality Police after she was arrested for wearing the hijab wrongly.

22-year-old Mahsa Amini died on September 16, and as Islamic tradition demands, the 40th-day anniversary is one of the highest forms of respect given to the dead. To mark the day, thousands of people visited the cemetery at Saqqez, which is Amini’s burial place, and as expected, the crowd was heard chanting “women, life, freedom” and “death to this child-killing regime.”

Iranian state media IRNA reported that Amini’s family had earlier released a statement saying they will not mark her passing on Wednesday. However, Hengaw, a Kurdish rights group insists that the family made the commitment because it was “under a lot of pressure” from the security forces and that they had threatened to arrest Mahsa Amini’s brother if the ceremony took place.

“Despite the authorities’ pressure on the family to recall the 40th days ceremony for Mahsa Amini, thousands gather on Mahsa’s grave chanting “Kurdistan will be the graveyard of fascists” “women, life, freedom,” BBC’s Jiyargol wrote on Twitter.

Although the actual number of people that attended the ceremony remains uncertain, Iranian journalist Shahed Alavi said they could be as many as one hundred thousand.

While sharing a video of people on their way to the Aichi Mausoleum cemetery in Saqqez, Alavi wrote: “A crowd whose beginning reaches the entrance of Saqez from Bane road and whose end is invisible. The population I believe is over a hundred thousand people.”

While Shahed Alavi’s figure is debatable, one would not deny that the crowd that turned up for the event was unexpected, as there was a long traffic of cars and human traffics. Others estimated the crowd to be about 10,000 people.

Clashes recorded at the memorial

Since the protest began on September 17, the Iranian government has increased the presence of military and police personnel on the streets of Iran, especially in the Kurdish region, which is the home of Mahsa Amini.

Videos shared on social media further showed an increased presence of security officials overnight, which many believe was in preparation for Wednesday’s ceremony to mark the 40th day anniversary of Amini’s death. However, the heavy presence of these officials could only do very little or nothing to stop the angry mourners.

An unnamed protester told Reuters news agency that “the riot police shot mourners who gathered at the cemetery” and dozens of mourners were arrested.

Iranian State news agency, ISNA, said: “A limited number of those present at Mahsa Amini’s memorial clashed with police forces on the outskirts of Saqqez and were dispersed.”

“Following the scattered clashes, the internet in Saqqez was cut off due to security considerations,” ISNA reported on Wednesday, adding that the mourners were chanting Kurdish slogans and raising the Kurdish flag. But there was no report of shootings and arrests made at the cemetery.

Every effort by the government to crack down on the ongoing protest in Iran has yielded very little or no result. The government has disrupted internet services, expelled students, arrested hundreds, and arguably, killed over two hundred.

All of these seem to be adding fuel to the already burning fire as new groups continue to join what now looks like an eternal protest.

Footage shared on social media showed protesters believed to be Doctors and dentists chanting “freedom, freedom, freedom.” Another video showed security officials firing teargas in their direction in an attempt to disperse the crowd.

More University students continue to join the protest, as some have now turned to virtual classes to save the situation.

As of Wednesday night, the protesters were still on the streets of Tehran, carrying sticks to defend themselves should the Iranian police attack.

The police have adopted several techniques to disrupt the protest. Another video shared on social media showed the Police forces vandalizing the motorcycles of people in Tehran, believed to be protesters, and it appears that the tactics only fuel the anger of the people.

So far, an estimated 222 people have died in the protest. Others argue that the figure could be higher than that. Thousands of protesters and security officials have also sustained various degrees of injury.