No Burna Boy on 2nd night of Dominica’s WCMF 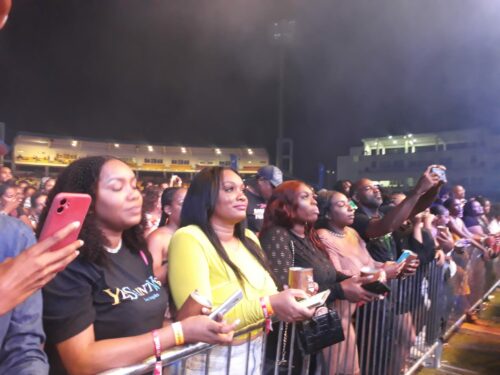 Thousands of patrons, especially the Haitian and African communities, and locals too, were left disappointed on night 2 of the World Creole Music Festival in Dominica after the headline act failed to show up.

The festival is back after a two-year hiatus due to the COVID-19 pandemic.

But Afrobeat superstar Burna Boy, a popular Nigerian singer, was expected to perform on Saturday but to the disappointment of patrons, the artiste reportedly did not make it to the island because of travel issues

Burna Boy along with Omah Lay was booked for their first performances on Dominican soil.

Colin Piper, the Chief Executive Officer of Discover Dominica Authority could not prevent the “boos” from the crowd when he made the announcement

Patrons with Saturday night tickets are told that they will enter the show free of charge on Sunday, however, some people purchased season tickets. Piper did not address that aspect

“I am very disappointed. I mean come on. We came for Burna Boy. We have to deal with rain and then this. What did I come here for then”, one patron told our newsroom

Others took their ranting to social media, saying that Burna Boy was the only reason they bought the Saturday night ticket which cost them a whopping $200.00

“Things are so hard in Dominica already I just wasted 200. Who says I wanted to go anywhere Sunday”

Burna Boy, according to sources did not get a connecting flight to Dominica due to the scarcity of flights and issues surrounding intra-regional travel. According to reports, he was stuck in Trinidad, after having performed there two nights ago.

He rose to stardom in 2012 after releasing “Like to Party”, the lead single from his debut studio album.

In 2017, Burna Boy signed with Bad Habit/Atlantic Records in the United States and Warner Music Group internationally. His third studio album, “Outside”, marked his major-label debut.

In 2019, he won Best International Act at the 2019 BET Awards and was announced as an Apple Music Up Next artist.

In July 2022, Burna Boy released his sixth studio album, “Love, Damini” which also became the highest debut of an African album on Billboard, Netherlands, the United Kingdom, and France.

In October, Burna Boy was given the award of Member of the Order of the Federal Republic for his achievements in music.

The WCMF is taking place from October 28 to 30.