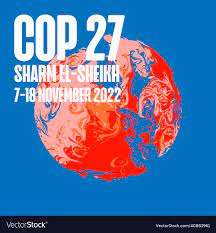 In a potentially embarrassing about-turn, which has been ridiculed by opposition parties, UK Prime Minister Rishi Sunak has confirmed he will now attend the COP27 climate conference next week after all, even though he previously had been insisting that pressing domestic challenges had to be his main focus, and as a consequence, he would not be travelling to Sharm El-Sheikh, Egypt, location of this years’ convention.

This follows days of mounting pressure on the new PM from environmentalists, and the U-turn may have had a mighty push when former leader Boris Johnson confirmed on Tuesday (1 November) that he would be attending, on an invitation from the Egyptians. A Number Ten spokesperson said that “significant progress” was being made on the critical financial statement which is due to be released on 17 November, and therefore Mr Sunak would be able to be part of COP27, which starts on Sunday (6/11) and will run through until that important date of the 17th; it is not clear how many days the PM intends to be in attendance.

The COP’s, or Conference of the Parties to give them their full title, are annual gatherings of major decision-makers from around the globe to discuss important matters with a strong focus on climate change, and this years will be the 27th such meeting, which effectively are United Nations summits. They first met back in 1995 in Berlin, with last year’s (COP26) taking place in the UK, in Glasgow. There will be reviews of national communications and emission inventories, progress reports and hopefully commitments for the good of the planet, moving forward.

In a short tweet issued this morning (2 November) Mr Sunak said: “There is no long-term prosperity without action on climate change and there is no energy security without investing in renewables,” insisting that is why he felt he had to attend @COP27P in the coming days, to as he put it: “Deliver on Glasgow’s legacy of building a secure and sustainable future.”

The Prime Minister’s predecessor Liz Truss had been set to attend, but it is the confirmation that her predecessor, Mr Johnson was going to be there, that seems to have triggered a change of mind. Seemingly, the prospect of being undermined so soon after coming into office, may well have led to him being advised as to the importance of him making the effort to go along after all.

Mr Johnson had said in an interview that he has a particular interest in being there, saying that it seemed to him that it had become unfashionable to talk about last year’s conference, when of course he was still in charge; but argued that it was “a fantastic global success, which was doing a huge amount of good for the planet.” He said that he would like to use his attendance in Egypt to “talk a little bit about how I see things and how we see things in the UK.” Before adding that he was very grateful for the personal invitation he had received from the Egyptians for him to be in attendance.

It could be that it was indeed that last line which irritated Mr Sunak’s advisors sufficiently to persuade the new PM to change his mind.

Deputy Labour leader Angela Rayner made a point of accusing the PM of being “dragged kicking and screaming into doing the right thing”. Liberal Democrat climate change spokesperson Wera Hobhouse spoke of the whole debacle showing the environment is simply not a priority for the Conservatives and especially their leader Rishi Sunak. “He is only going after being embarrassed by Boris Johnson’s attendance,” she said. Whilst Green party MP Caroline Lucas said the screeching U-turn was “an embarrassing mis-step on the world stage” and it should be a lesson to him that climate leadership matters.

The UK government had made a five-year international climate finance commitment, which they insist is not under any threat, despite all the changes worldwide in the last 12 months. They have nonetheless, postponed much of the spending to future years in light of cuts to ODA, and with rumours of further cuts on the way, serious concerns are being raised towards climate finance, something Mr Sunak is sure to be pressed on, and possibly why he was reluctant to attend initially.

Conference to challenge for movement towards implementation of previous pledges

At last year’s conference the “Glasgow Climate Pact” was drawn up, which effectively was to keep the goal of curbing global warming to 1.5 degrees Celsius alive. There were many pledges made regarding net-zero commitments, forestry protection and climate finance, among many other environmental issues. These will be revisited at COP27, where there will be a challenge to move from negotiations and shift them towards implementation, with the hosts Egypt calling for full, timely, inclusive, and at-scale action on the ground.

The principles and visions are commendable, with objectives such as adapting to be able to press ahead with the reduction in greenhouse gases by using new technologies and renewable energy sources to cut the emissions, together with continued assistance offered to the most vulnerable communities. Unfortunately, finance always becomes the key factor and there is no escaping the landscape has shifted since COP26, especially as a result of the war in Ukraine. Certain agreements will inevitably have to be shelved, due to the many nations suffering global inflation, plus energy, food and supply chain crisis.

However, some experts are suggesting that the fall-out from the Ukrainian situation could actually work as a wake-up call for countries to become far more self-sufficient in energy.

What is clear, is that there are many massive decisions to be made, which makes Mr Sunak’s initial reluctance to attend and seemingly dismissive approach to the conference, all the more puzzling.