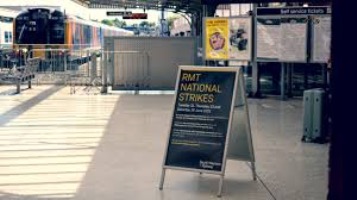 Planned train strikes, the first of which was due to begin today (Saturday 5 November) have been called off at the last minute. The RMT union announced it was cancelling the three one day strikes, because of “progress being made” with Network Rail  for “unconditional” talks, and the promise of an offer on pay from the operating companies.

The other two 24-hour walk-outs were set for Monday and Wednesday of next week, but the change of heart has come too late in the day for thousands of travellers, who have either already made alternative arrangements, or abandoned plans altogether. Also, rail bosses have said that due to the short notice of the strikes being aborted, there would be an “extremely limited” rail service on Saturday, and the disruption would very likely continue into Monday (7 November), as it was far too late to reinstate the majority of services.

Network Rail advising passengers not to travel if not totally necessary

Tim Shoveller, the chief negotiator for Network Rail, whilst welcoming the news, explained that even though staff would be working without pause over the weekend, there would still be restricted ability to change the “strike timetable”. He said: “Our advice has to be for passengers to check before you travel and only travel by rail if absolutely necessary.”

He added that they were looking forward to getting back round the table with all the trades unions early next week, to see if the progress made this week could be built on, and a satisfactory resolution found for all concerned.

The Rail Delivery Group (RDG), which represents train companies, said that it was a positive move and encouraging that the RMT had stepped back from the action, but pointed out that rosters for drivers are typically agreed a week in advance, meaning that the incredibly short notice of the cancellation of the strikes meant that train driver availability will inevitably be very challenging and as a consequence, they would have to rely primarily on volunteers stepping forward.

Little regard for the average sports fan

That is something the unions would have been aware of, so their timing in suspending their action, certainly has to be called into question. They have also ruined the weekend for thousands of people, including many sports fans who need time to plan journeys by rail, particularly rugby fans travelling to Cardiff for the Wales and New Zealand autumn international; and the many football supporters up and down the country, who are passionate about following their team and will have had to commit to alternative modes of transport to get to their specific fixtures.

Transport Secretary urges all parties to work together towards a resolution

The strikes had been called in a dispute over pay and working conditions. They would have involved signalling staff together with employees of 14 train operating companies. Transport Secretary Mark Harper saw it as a positive development and encouraged unions and employers to continue their negotiations, stating that calling off the strikes had given the next set of  talks a better chance of success. He added: “It is vital, for passengers and workers alike, that all parties continue to work together and deliver a modern railway we can all be proud of.”

RMT general secretary Mick Lynch confirmed that they would now enter into a period of intensive negotiations with Network Rail and the train operating companies, but was quick to point out that the dispute remained very much alive and reiterated that the union would be continuing its re-ballot of members to secure a fresh mandate for action, with the result due on 15 November.

He boasted that: “The threat of strike action and our strongly supported industrial campaign has made the rail employers see sense.” Before going on to say: “We have always wanted to secure a negotiated settlement and that is what we will continue to push for in this next phase of intensive talks.”

The union’s priority he said, was its members and that they were working towards securing a deal on job security, and for a decent pay rise and good working conditions. He did however finish with a warning, by insisting that if further strike action is necessary during the next 6 months to secure a deal, then they would not hesitate to do so.

There was some confusion later when both the rail employers and the government said neither of their positions had changed, so if that was the case, it was unclear what had prompted the cancellation of the strikes. It seems maybe not everyone is being totally forthcoming with all the facts, but on which side is a matter for conjecture.

Meanwhile, a spokesperson for Transport for London (TfL) said planned strikes on the London Underground on Thursday (10 November) were still due to go ahead, as this was a separate dispute and would leave the capital with limited, or no services on that day.

Previous disruptions over the summer have led, it has been estimated, to in the region of £52 million being lost, and the fear is for a devastating ripple effect on the London economy, if they continue much longer; so everyone is hoping some similar progress can be made to bring them to a halt.