UN Votes to Condemn US Embargo on Cuba 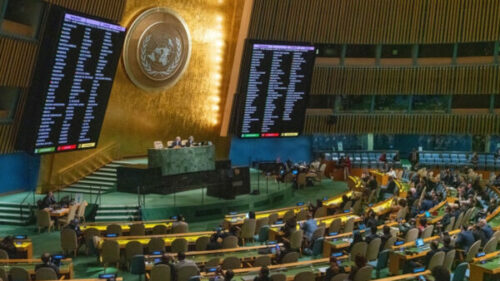 For the 30th year in a row, the United Nations General Assembly has again voted overwhelmingly to condemn the American embargo on Cuba.

The vote yesterday, in the 193-member General Assembly was 185 countries supporting the condemnation, the United States and Israel opposing it, and Brazil and Ukraine abstaining.

The U.S. government “has escalated the siege around our country, taking it to an even crueler and more humane dimension, with the purpose of deliberately inflicting the biggest possible damage on Cuban families.” Cuban Foreign Minister Bruno Rodriguez said before

“The blockade, which has been tightened to the extreme, continues to be the central element that defines the U.S.-Cuba policy,” he added.

U.S. political counselor John Kelley told the assembly after the vote that the “United States remains committed to the Cuban people’s pursuit of freedom and dignity, is focused on their political and economic well-being, and centers its efforts “on democracy and human rights and fundamental freedoms.”

During the first 14 months of the Biden administration, it is reported that the damage to the Cuban economy was estimated at $6.35 billion, equivalent to more than $15 million.