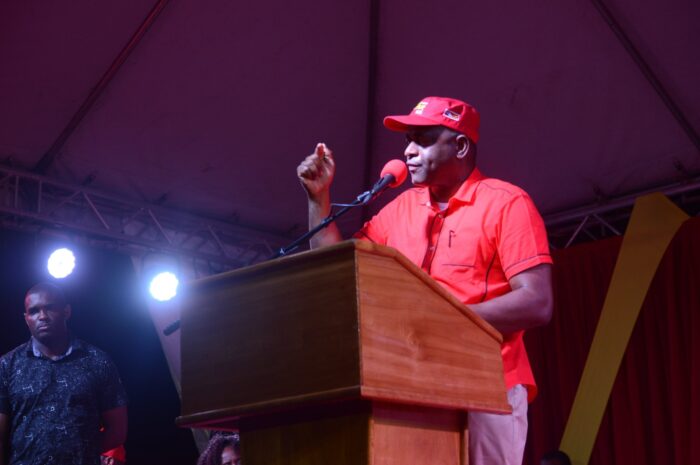 Dominica’s Prime Minister Roosevelt Skerrit says is not buying the reasons behind a decision by the Opposition United Workers Party to boycott the upcoming general elections.

The UWP said in a press statement on Tuesday that it was not contesting the December 6th elections.

Skerrit called a snap election, two and a half years before it is constitutionally due. The UWP said they won’t go into a fraudulent election without electoral reform and a clean voters list.

But Skerrit said at the launch of its new candidates on Tuesday night that if he were part of a party like the UWP, he would bow out of the race as well.

He said the true reason behind the refusal of the UWP to contest elections is simply because they knew winning was not possible.

Skerrit also took a swipe at former UWP leader Lennox Linton who he said abandoned the party in the dead of night, saying that his colleagues were crooks.

“They cooked him…he gets up and leaves the leadership of a political party three years after an election. Who does that? Who does that? We caught them with their pants and on the way down…it was not only down it was completely off and they cannot recover from this…the UWP tonight is as naked as it was born,” he said.

PM Skerrit also accused the UWP of having no policy, no philosophy, no ideas, no presence on the ground, and no money

“So, tell the Workers Party for me tonight. To stop their damn nonsense about they’re not running because of a report on electoral reform. That is not true. They match up and down for the last three months in Roseau demanding an election…Well if you are not ready, then don’t come and talk to me about your problems. That is your problem,” he said.

The DLP on the other hand according to Skerrit who has served Dominica for five terms, is ready for the polls on December 6th.

“We are ready to continue the advancement of Dominica for the benefit of the people of Dominica. If they don’t want to contest then that’s them. I have led a party in parliament with 18 seats and I am prepared to take all 21 seats. It’s okay nobody will miss them anyway…they are a bunch of lazy men and women looking for a salary every month, no work. So, if they don’t want to run okay. But we will take only 21 seats, all of them,” he said.

Meantime Skerrit issued a call for anyone whom he says may want to block roads and obstruct the elections, saying that they will be dealt with using the full extent of the law.

“I am warning them tonight. That nonsense they did the last election and blocked streets and barred streets. Let me say to them, that we will not sit down and take that nonsense again in Dominica. That nonsense will not happen in our country, this lawless behavior, and the government will not accept it from these people. You fight elections with policies, programs, and ideas, not blocking streets and burning streets nominees. It’s not going to happen again. And if it happens, we’ll deal with it according to the law,” he said.