Nancy Pelosi steps down as leader of House Democrats 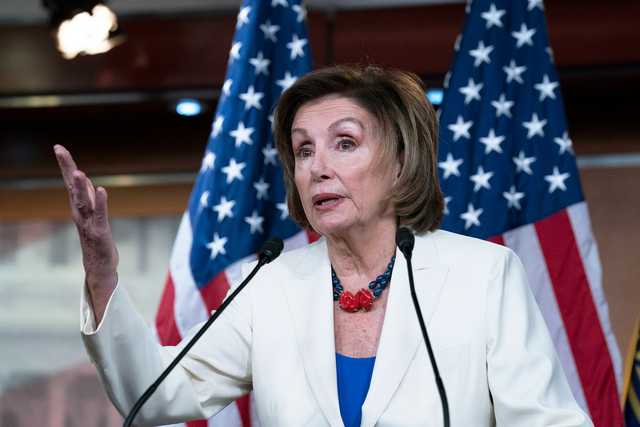 Nancy Pelosi, 82, has announced that she will not be contesting for the leadership of the Democratic party in the next Congress. The Congresswoman, who has led house democrats for the past 19 years, made the announcement on Thursday following the Republican’s takeover of the US House of Representatives.

“I will not seek re-election to Democratic leadership in the next Congress,” Pelosi said. “For me, the hour has come for a new generation to lead the Democratic caucus that I so deeply respect. And I am grateful that so many are ready and willing to shoulder this awesome responsibility.”

Nancy Pelosi is the first and only woman to hold the position, which is second in line to the president of the United States. She represents San Francisco, the 12th District of California, in Congress. She became leader of house democrats in 2003 and was elected leader of the house after the Democratic party won the majority of seats in the 2006 mid-term elections.

In her speech, the 82-year-old mentioned the growth recorded in the house during her time in Congress, mentioning how congresswomen grew from 12 to over 90. She also thanked her husband, Paul, describing him as a “pillar of support.”

“For my dear husband, Paul, who has been my beloved partner in life and my pillar of support, thank you,” Pelosi said.

Pelosi to continue as House member

Despite stepping down as leader of House Democrats, Pelosi would continue to represent the people of Francisco, which is in the state of California. Her speech on Thursday indicated that 82-year-old still have other years to spend in the House but in lower capacities.

Pelosi did not acknowledge Trump as President

During Trump’s time as president of the United States, his archenemy was Nancy Pelosi, then speaker of the House of Representatives. At a point, she tore a copy of Trump’s speech publicly in Congress. Trump later went on to lose the 2020 presidential election.

One would expect that after a tough political battle, the two rivals would find a way to get along as other politicians. However, to the surprise of many, Pelosi named the various presidents she worked with and omitted the name of Donald Trump despite ruling the country for four years.

Why would Pelosi omit Trump’s name? Is it because he is a Republican? That could not be the reason, because George Bush, whom she mentioned, was a Republican president. It appears that Nancy Pelosi has her record of America’s history where the four years of Donald Trump were missing. During her time, Trump was impeached as President twice.

Resigning because she can’t be the Speaker

If Nancy Pelosi had remained the leader of house democrats, she still would not have had a chance to become a speaker after her party lost control of the House of Representatives in the recently conducted mid-term election. Had the Democratic party won the majority in the House, Pelosi, most likely would have remained leader of the House Congress and likely continue as speaker of the house.

Possibly, her resignation is a subtle way of facing the reality that her party is no longer in control of the House. Although Pelosi still has the right to contest as a speaker, it is unlikely that she would win in a Republican-controlled House.

The Democratic party was in full control of congress, controlling both the senate and the house. In the next Congress, Republicans will now take charge of the House following the election victory, while the Democrats retained the control of the Senate.

Pelosi is, no doubt, an iconic American. Soon after her announcement, top American politicians took to social media to sing the praises of the first woman speaker of the US House of Representatives.

First on the long list was American President Joe Biden. In a statement released by the White House, Biden, who is believed to have asked Pelosi to change her mind about the decision, said: “When I think of Nancy Pelosi, I think of dignity.”

“History will note she is the most consequential Speaker of the House of Representatives in our history. There are countless examples of how she embodies the obligation of elected officials to uphold their oath to God and country to ensure our democracy delivers and remains a beacon to the world. In everything she does, she reflects a dignity in her actions and a dignity she sees in the lives of the people of this nation,” Biden stated.

The President listed the various bills Pelosi helped to pass and narrated how she stood up for the country’s democracy during the era of Donald Trump, especially during the January 6 insurrection.

“Nancy Pelosi is first, last, and always for the people…As a nation, we owe her a deep debt of gratitude for her service, her patriotism, and above all, her absolute dignity,” Biden added.

Former president, Barack Obama, said: “Speaker Nancy Pelosi will go down as one of most accomplished legislators in American history—breaking barriers, opening doors for others, and working every day to serve the American people. I couldn’t be more grateful for her friendship and leadership.”

Democratic Senator Chris Van said: “Not only did Pelosi make history as the first woman Speaker of the House, but as the most effective Speaker ever. She has been the fearless force behind much of the progress we have made in the 21st Century. Her legacy is forever etched in American history.”

The process of replacing Pelosi as leader of House democrats had begun following her resignation. Meanwhile, the Republican party is warming up to replace her with a speaker that could block Biden’s agendas.