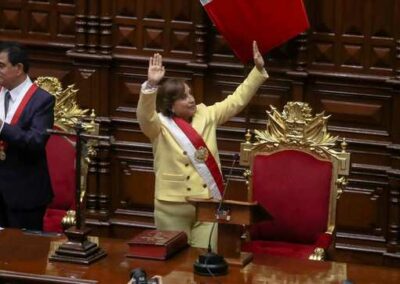 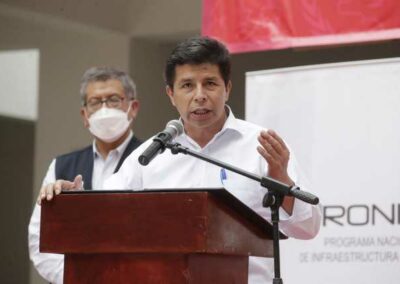 Wednesday was one of the most controversial days in the history of Peru after the plan by the country’s president to dissolve parliament backfired, causing him to be impeached and replaced with his deputy.

Pedro Castillo, on Wednesday, announced that he would use his emergency powers to dissolve parliament and call for new elections. He described the move as an attempt to “reestablish the rule of law and democracy” in Peru and establish a “government of exception.

Despite calls from allies and other countries to back down on the decision, Castillo insisted on exercising the controversial power he claims to have had. Little did he know that he was about to get the surprise of his life.

An immediate impeachment and a swift replacement

The power tussle between the parliament and the executive ended after Castillo’s announcement was followed by an impeachment process that removed the country’s leader and replaced him with the vice president.

The lawmakers voted 101-6 to remove Castillo on the ground of “permanent moral incapacity.” It was the third impeachment attempt since he took office on July 2021. The Ministry of Justice later shared his picture after he was detained. He is answering questions over his alleged corruption charges.

In December 2021, Castillo faced his first impeachment attempt and the second in March 2022. The two attempts failed as the process did not get the required two-thirds majority needed to go through.

The most recent call for impeachment began after the country’s attorney general Patricia Benavides raised serious corruption allegations against the president. He said: “We have found very serious indications of a criminal organisation that has taken roots in the government.”

Although he denied any wrongdoing, protests erupted in various parts of the country, demanding his resignation from office until the police forcefully calmed the situation. His decision to dissolve parliament is not unconnected with the calls for impeachment, as he could be seeing the possibility of not surviving a third impeachment process.

Following Costillo’s impeachment on Wednesday, his deputy, Dina Boluarte, who was on the same ticket with him when he won the election in 2021, was called on by parliament to take the job. The 60-year-old will become the country’s first female president and will continue in that position until the next election in 2026. However, with the political instability in Peru, one cannot guarantee, for now, that she will complete those years in office.

After she was pronounced president, Boluarte said she would form an all-inclusive cabinet, which includes people of different political parties, and called for a political truce to end the country’s political crisis.

“There has been an attempted coup … that has not found an echo in the institutions, nor the street. What I ask for is space, time to rescue the country,” the new president said. She couldn’t ask for more because none of her predecessors in the past few years have had enough time.

Despite Castillo being the president of the country, it looked like his decision to dissolve parliament was not welcomed by members of his government, including his vice president. The chair of Peru’s constitutional court described Castillo’s action as a “coup d’etat” and called on the country’s military to use its powers to block his actions.

Then vice-president Dina Boluarte publicly rejected his principal’s proposal, describing it as a coup that would encourage the breakdown of law and order.

“I reject the decision of Pedro Castillo to perpetrate the breakdown of the constitutional order with the closure of Congress. It is a coup that aggravates the political and institutional crisis that Peruvian society will have to overcome with strict adherence to the law,” Dina Boluarte wrote on Twitter.

Cesar Landa, the country’s foreign minister, resigned in protest of Castillo’s decision to dissolve parliament, describing it as a violation of the country’s constitution. She wrote: “I have decided to irrevocably resign from the position of Minister of Foreign Affairs, given the decision of President Castillo to close Congress.”

Castillo could have known better that the attempt to dissolve parliament was dead on arrival after the United States issued a warning on Wednesday. The country’s embassy, in a statement, said: “The United States strongly urges President Castillo to reverse his attempt to shut down Congress and allow Peru’s democratic institutions to function according to the Constitution. We encourage the Peruvian public to remain calm during this uncertain time.”

Peru, a country where the president’s term is uncertain

Apart from being known for tourism, Peru is also known for its inability to keep a leader for a five-year term, as specified in the country’s constitution. Since 2011, seven presidents and four former leaders are either detained or wanted for corruption charges.

Unfortunately, there are always loggerheads between presidents and legislators. President Martin Vizcarra, who was president from 2018 to 2020, dissolved parliament in 2019 and used his powers to order a new election. Congress was dissolved, but one year after the election, it was the turn of legislators to remove Vizcarra as president, and he was successfully impeached.

Following Vizcarra’s impeachment, President Manuel Merino came to power, but he lasted less than a week as president. Francisco Sagasti, who took over from him, stayed longer but spent barely nine months as president. Castillo took over after Sagasti, but Wednesday’s twist of event mean his reign that was supposed to last until 2026 has been cut short once again.

What many would be wondering at this time is if the new president would scale through the multiple hurdles until 2026.

The untold fears of a military takeover

“Congress and the executive are constantly at each other’s throats—essentially checks and balances on overdrive—giving the armed forces final say,” Will Freeman of Princeton University in the US told Aljazeera.

Interestingly, the military seems to be uninterested in the country’s politics but only uses its power to uphold the country’s constitution. What if it gets tired of the multiple challenges rocking the democratic processes in Peru? A take-over of government would be so easy because it is already determining what happens in the so-called democracy.

The situation in Peru worries the world

While Peru is a sovereign nation, what happened on Wednesday has raised concerns in other countries, especially those not far from the South American country. The Chilean foreign ministry was quick to react and urged all parties to respect the country’s laws and resolve the crisis “through democratic mechanisms.”

“Our country makes an emphatic call for respect for human rights and fundamental freedoms, and reaffirms its commitment to democracy and dialogue as the way to overcome this complex moment,” the Chilean foreign ministry said on Wednesday.

Mexican president Andres Manuel Lopex Obrador said his country is deeply concerned about the situation in Peru and urged all parties to accept democratic stability that will benefit the people of Peru. In a series of tweets, he said Castillo’s decision came after many confrontations against him.

Following the news of Costillo’s impeachment, the United States seems to have accepted the new development. Comments made by Ned Price, the spokesperson for the US Department of State, show that Costillo is no longer recognized as president, even in the United States.

“My understanding is that, given the action of the Congress, he is now former President Castillo,” Price told reporters, adding that his impeachment was a “corrective action.”