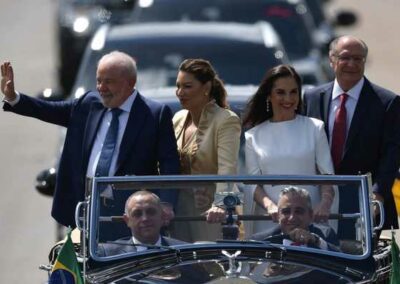 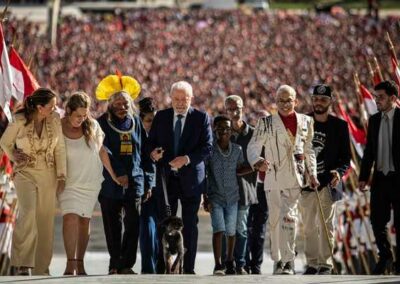 Famous leftist Lula da Silva has been sworn in as president of Brazil, replacing far-right leader Jair Bolsonaro. It was his third term as president after leading the South American country from 2003 to 2010. During the October 30 run-off election, Lula defeated incumbent president Bolsonaro with a narrow margin, a result subtly denied by the outgoing leader until his final day.

In his inaugural speech, Lula promised to overturn all the damages caused by his predecessor and revive the country’s stagnant economy. During his first two terms as president, Lula received credit for lifting many Brazilians out of poverty and waking up the the country’s dwindling economy.

For the second time, Lula will face the daunting task of lifting millions of Brazilians out of poverty and settling the country’s numerous debts.

“Today our message to Brazil is of hope and reconstruction,” Lula da Silva said. “If we are here today, it is thanks to the political conscience of Brazilian society, and the democratic coalition that we built during the campaign.”

“Despite everything, the decision in the ballots prevails,” Lula stated.

A pen doing its job after 34 years

An empty country left behind

President Lula da Silva, who was accused of corruption by the outgoing president, on Sunday, after his swearing-in, said Bolnosaro and his men left almost nothing behind for the people of Brazil.

“The diagnosis we received from the transition cabinet is appalling. They emptied the resources for health, dismantled education, culture, science, they destroyed the environmental protections, haven’t left resources to school meals, vaccines, public security, forest protection and social assistance,” the new president stated.

Lula, however, promised to take the country out of the “ruins” alongside the people of Brazil.

“I assume the responsibility for rebuilding the country and making it a nation of all and for all,” Lula stated.

When Bolsonaro’s inauguration in 2019, Lula was in prison, as he was accused of corruption and financial mismanagement. He spent 580 days behind bars before the country’s supreme court overturned his conviction. Fast forward to 2023, Lula is now president again and has accused those behind his ordeal of the exact crimes they said he committed.

During his speech on Sunday, Lula, without mentioning a name, said members of the former government would answer for their actions.

Bolsonaro to answer for his errors

Many, including supporters of Bolsonaro, had expected revenge should Lula take over as president from his bitter rival. One thing Lula did perfectly well during his inaugural speech was not mentioning the name of his predecessor. Without Bolsonaro’s name, he counted his crimes and insisted that the former president would have to provide explanations.

“We do not carry any spirit of revenge against those who tried to subjugate the nation to their personal and ideological designs, but we will guarantee the rule of law,” Lula stated. “Those who erred will answer for their errors.”

Lula accused his predecessor of killing 680,000 Brazilians over his handling of the Coronavirus pandemic. Bolnosaro, like Trump, has been accused of not handling the Covid-19 pandemic as it should. Despite the growing number of cases, he felt a lockdown was unnecessary, a decision many people felt was responsible for the high number of deaths. Lula went as far as accusing the outgoing leader of “genocide,” for which he must be held accountable.

“The responsibilities for this genocide must be investigated and must not go unpunished,” he said.

Lula also criticised Bolsonaro’s “campaign of lies” to manipulate voters into hatred. The outgoing president had said he doubted the country’s electoral voting system, citing fraud and irregularities. After the election, Bolsonaro also did not concede defeat, a move many said caused demonstrations in various parts of the country. Political analysts say Bolnosaro might have to defend himself on his behaviour before and after the election.

“Democracy was the great victor in this election, overcoming … the most abject campaign of lies and hate plotted to manipulate and embarrass the electorate,” Lula told lawmakers at his inauguration.

Climate is a top priority

President Lula, in his first speech as president, restored the environmental protection agency Ibama to curb illegal deforestation and promised to make Brazil a green superpower.

“We will not tolerate the environmental degradation and deforestation that harmed the country so greatly. This is one of the reasons for the creation of the indigenous people’s ministry,” Lula stated.

Although there are major differences between Lula and Bolsonaro, this is one area in which they are significantly different. While the new president has proposed tough actions against climate change, the former leader doesn’t see it as a matter of utmost importance. Hence, Lula on his first day in office overturned most of his predecessor’s climate policies.

There were fears that Sunday’s inauguration would not be violence-free, especially after Jair Bolsonaro refused to concede defeat. Approximately 8,000 security personnel were present at the inauguration to ensure safety. The move yielded results as a man was arrested with a knife and fireworks when attempting to get into the inauguration party.

On Wednesday, the Supreme Court of Brazil ordered a four-day ban on carrying firearms in the capital, except for the police and other security operatives. The order came after a man was arrested for allegedly planting and possessing explosive devices at the Brasilia International Airport. Thankfully, no major security breach was recorded during Sunday’s inauguration.

48 hours before Lula’s inauguration, Jair Bolsonaro fled Brazil for the United States. To many, his immunity will soon be over, and he is scared of being prosecuted by the new government. During Sunday’s inauguration, he was nowhere to be found, as he handed over powers to his vice president before leaving the country.

Even his vice president did not fail to criticise his former boss’ handling of the election, saying his silence created “an atmosphere of chaos.”

“Leaders that should reassure and unite the nation around a project for the country allowed that silence to create an atmosphere of chaos and social division,” Hamilton Mourao, Brazil’s immediate past vice president, stated.

Political analysts say Bolsonaro could face legal action should he return to the country, as he no longer has immunity. And with Lula as president, even his smallest crime will not go unpunished.