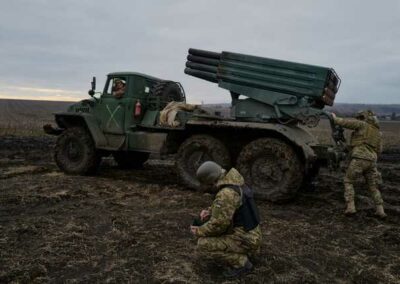 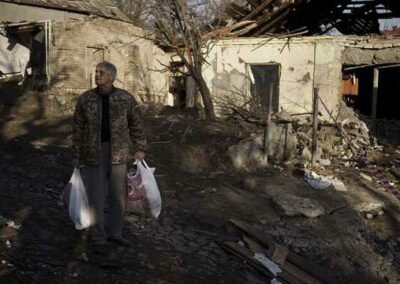 “Happy New Year.” That was the inscription in one of the multiple drones used to attack Ukrainian cities between December 31 and January 1st. It was Russia’s way of welcoming Ukraine into 2023. Such a New Year message deserves a reply, and that is what Ukraine did on the same night by using precision weapons to attack a vocational school used as a temporary military base in the city of Makiivka, located in the Donetsk region. According to Ukrainian officials, 400 Russian soldiers died in the rare attack, of which most were conscripts.

“Greetings and congratulations” to the separatists and conscripts who “were brought to the occupied Makiivka and crammed into the building of a vocational school,” the Ukrainian armed forces said on Telegram. “Santa packed around 400 corpses of [Russian soldiers] in bags.”

Officials of the Russian-backed Donetsk People’s Republic also acknowledged the attack, identifying the weapon used for the attack as an American High Mobility Rocket System.

“On New Year’s Eve, literally at midnight, the vocational school was struck with a massive blow from the American HIMARS. There were fatalities and wounded, the exact number is not yet known,” Daniil Bezsonov, an official of the Donetsk People’s Republic, wrote on Telegram.

Russia’s rare acknowledgement, but not 400 deaths

On Monday, the Russian military acknowledged the deaths of its men but said it lost 63 soldiers and not 400, as claimed by the Ukrainians. It said the temporary military base was hit by four rockets fired from U.S-made HIMARS launchers.

The Russian side claimed that it shot down two of the rockets, but the other two hit the building, killing the soldiers and destroying Moscow’s military tanks and equipment.

Antigua news could not independently verify if the Russian figure or the Ukrainian figure is the correct one, but the Ukrainian army said it is clarifying the number of Russian soldiers that died in the attack. Either way, it is one of the deadliest attacks since the war started almost one year ago.

Although the Ukrainian government claim to have eliminated about 400 Russian soldiers and injured another 300 in Sunday’s strike, it has not released an official figure as it is still dealing with estimates. On Monday, Ukraine’s military, in its update, said it is clarifying the earlier claim that 400 servicemen were killed in Makiivka. That means the figure could either go up or fall, depending on the outcome of the investigation.

The update added that Russia has lost many soldiers and is focusing on conducting offensive actions.

“The enemy, losing a lot of manpower, continues to focus on conducting offensive actions in the Bakhmut direction and is trying to improve the tactical situation in the Kupyansk and Avdiivka direction,” the update stated.

While there is doubt about Russia’s claim that it lost 63 soldiers in Sunday’s attack, there is also doubt about Ukraine’s figure as it is a round figure of 400. It is most likely that the figures from both sides are wrong. One looks like an exaggeration, while the other looks like an understatement.

Sunday’s attack is arguably the most deadly for Moscow since the war started ten months ago. The thought that dozens, if not hundreds of soldiers, could gather in an unprotected building is unreal to most Russians, and they are questioning the men at the top of the military hierarchy.

“Who came up with the idea to place personnel in large numbers in one building, where even a fool understands that even if they hit with artillery, there will be many wounded or dead?” Archangel Spetznaz Z, a military blogger, wrote. He added that commanders were less concerned about how ammunition is stored carelessly on the battlefield.

“What happened in Makiivka is horrible,” he continued.

Boris Rozhin, another war blogger, said the incident happened because of the incompetence and lack of experience of the men on the battlefield.

“As you can see, despite several months of the war, some conclusions are not made, hence the unnecessary losses, which, if the elementary precautions relating to the dispersal and concealment of personnel were taken, might have not happened,” Rozhin wrote.

One cannot tell the exact situation in Ukraine as both sides could be exaggerating or understating the exact situation. However, it appears that Ukraine is gradually standing up to the Russians as they claim to be killing hundreds of Russian soldiers.

Last week, a military general in Ukraine reported that Russian forces “lost 760 people killed just yesterday (Saturday).” He did not specify where and how these soldiers died. If the reports are anything to go by, the situation of the war could be changing, and with Russia getting little support from its allies, Ukraine could have the upper hand soon.

However, with the United States and other western powers strengthening the Ukrainian army, it is having more strength to withstand the enemy.

Last week, President Zelensky said Ukraine could have the strongest air defence system in Europe this year. However, Russia is not also giving up, as it has been targeting critical Ukrainian infrastructures, including its sources of electricity. As the war enters its eleventh month, its end could still be far away as the battle for supremacy continues.