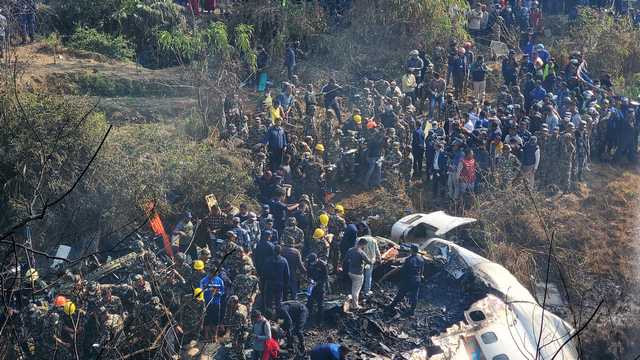 A domestic flight of Yeti Airlines has crashed in Pokhara, Nepal, killing at least 68 people. The incident, which is the worst plane crash in over 30 years, happened on Sunday. The aircraft was carrying 72 passengers, including foreigners and two infants.

“I saw the plane trembling, moving left and right, and then suddenly it nosedived and it went into the gorge,” Khum Bahadur Chhetri, an eyewitness, told Reuters.

“Half of the plane is on the hillside. The other half has fallen into the gorge of the Seti river.”Arun Tamu, a resident of the area who reached the scene soon after the accident, stated.

“I am shocked by the news of the plane crash of Yeti Airlines, which was flying from Kathmandu to Pokhara with 68 passengers. I request the government of Nepal to carry out the rescue work immediately after this tragic accident,” Bahadur Dueba, the leader of the Nepali Congress, wrote. “Also, I instruct the local party bodies of Nepali Congress to come to the rescue.”

On hearing the news of the crash, Prime Minister Pushpa Kamal Dahal rushed down to the airport, where he announced the deployment of the country’s army to the scene.

“The incident was tragic. The full force of the Nepali army, and police have been deployed for rescue,” he said.

Following the crash on Sunday, officials arrived at the scene to rescue any passenger still alive. The first goal was to put out the fire before beginning operations.

Gurudutta, a local official, said: “Responders have already reached there and trying to douse the fire. All agencies are now focused on first dousing the fire and rescuing the passengers.” However, at the time of this report, no passenger had been rescued alive. In total, 68 bodies have been recovered, out of the possible 72 people on board.

“We expect to recover more bodies. The plane has broken into pieces,” Krishna Bhandari, a spokesperson for the army, stated.

Another challenge faced by the rescue operators was the presence of large crowds wanting to catch a glimpse of what happened. The rescue team asked them to leave the site on Sunday, but it was impossible to convince the people to do so. On Sunday, evening, rescue operations were paused until Monday morning. As early as 7 am on Monday, officials were already on the ground to complete the complex job.

With 68 passengers out of the 72 confirmed dead, it is unlikely that any survivors are remaining inside the plane. There were 68 passengers in the plane, including four crew members and three infants. While most of the passengers were Nepalis, five of them were Indians, four were Russians, and two were from South Korea. Argentina, France, Australia, and Ireland had one citizen each in the crashed plane.

Sunday’s crash is the deadliest in the country since 1992. That year, 167 people on board died when a Pakistan International Airlines plane crashed in Kathmandu when trying to land.

However, Sunday’s crash is not the first in recent times. With Nepal having 14 of the highest mountains in the world, including the prestigious Everest, its weather changes at will, resulting in deadly crashes.

Last year, all 22 passengers on board died after a plane crashed in the mountains. It was said to have lost contact with aviation authorities soon after take off. In 2018, 49 of the 71 people on board died when a US-Bangla passenger plane crash-landed in Kathmandu, killing.

In total, 309 people have died in plane or helicopter crashes in Nepal since 2000.

Although the weather in Nepal is usually blamed for crashes, Sunday’s crash was different. The weather was perfect, hence something else must be responsible for the deadly accident. While everyone is waiting for the report of the committee set up to investigate what truly transpired, a flight tracker, Flightrader24, had described the ATR 72 aircraft involved in the incident as too old and equipped with unreliable data.

The aircraft involved is a 15-year-old ATR 72-500 with registration number 9N-ANC and serial number 754,” Flightrader24 tweeted. “This aircraft was equipped with an old transponder with unreliable data. We are downloading high-resolution data and verifying the data quality.”

The most recent crash by an ATR 72 was in 2018, killing 65 passengers on board. The conditions of planes used in Nepal have caused the European Union to ban them from its airspace.