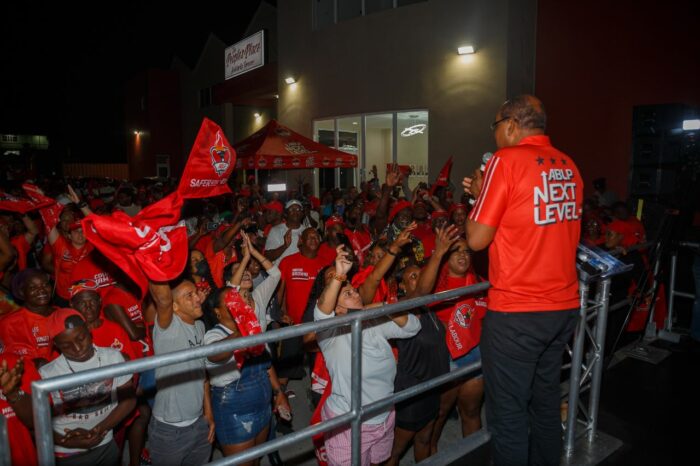 Gaston Browne has created history, becoming the first prime minister to be elected into office three times in a row.

While the party headed by Gaston Browne saw a number of its long-serving members hold on to their seats, it suffered several losses as well, only retaining nine of the 15 seats that it had in Parliament.

The main opposition United Progressive Party on the other hand grabbed  six seats altogether after having had only one seat in parliament.

Browne who has been sworn in as prime minister today said last night that the removal of some of his incumbent ministers provided the opportunity for fresh blood.

“We do not see this as a bad thing, we see it as an opportunity at the same time. However, I want to thank my colleagues who would have served this country well and we will not leave them in the cold,” he said

Browne said what may be considered to be a disappointment, would create the opportunity for renewal.

“I have said the ABLP needs fresh legs and new talents. The truth is, after two terms, some ministers don’t have the will the fight”, he said.

The prime minister said apart from the issues of Covid, climate change and the high cost of living, some colleges did not have the energy to mobilize.

“In any case, it will be an example for new leadership to ensure that no matter what, two terms or three terms you have to put in the same energy as in your first term and second term…I know that some are trying to demonize the leader…” he added.

Browne said he is also willing to realign where necessary “I will continue to serve you faithfully and honor the confidence and trust you have in me and I will never betray that trust,” he added.

Meanwhile, at the end of the vote counting, independent candidate Asot Michael went home with the St Peter seat, one at the center of controversy.

Michael claimed 2,137 votes against ABLP candidate Rawdon Turner who received 899. Michael and his former ABLP have had, for many years a nasty battle that even found its way into the courts.

He challenged a decision to replace him in St Peter following removal from the Cabinet, on the heels of his arrest in the UK over alleged involvement in a bribery scam.

Trevor Walker of the Barbuda People’s Movement retained the one seat that he has held.

So did newcomer Sherfield Bowen who grabbed the St Phillip’s South seat with a huge margin of 582 to Weston’s 360.

UPP candidate for the All-Saints East and St Luke constituency, Jamale Pringle, was re-elected for a second straight team, garnering a total of 1,799 votes to beat ABLP candidate, Colin James, who received 1,047 votes.

Harold Lovell, the Political Leader and candidate for St John’s City East Harold Lovell was not able to secure that seat for the third consecutive time. At the end of the first round, Lovell asked that the votes be recounted after he lost by six votes to Melford Nicholas.

The numbers remained unchanged after the second count with Nicholas receiving 791 votes while Lovell got 785 votes, a very close call.

Nicholas said on television and radio that the fight was long and hard and a very close call.

“It has certainly been gratifying even if it was a keenly fought race. It was challenging for me because the race was tight and it came down to the grounding and I had the better one,” he said.

Nicholas said he would have to pay keen attention to the voice of the electorate to “figure out”, where “this reset has come from”.