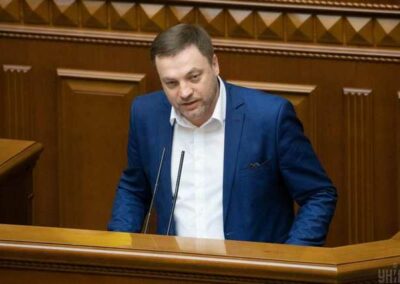 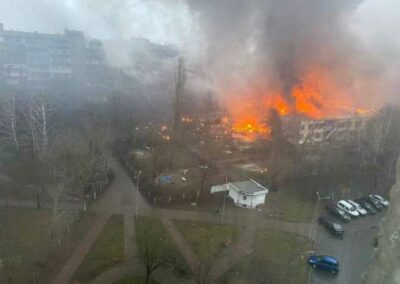 At least 14 people have been killed in Ukraine, including the country’s Minister of Internal Affairs, Denys Monastyrskyy, after a helicopter crashed close to a nursery school in Brovary, in Northeast Kyiv.

“A terrible tragedy happened today in Brovary, Kyiv region. A helicopter of the State Emergency Service crashed, and a fire broke out at the crash site,” President Zelensky wrote on Telegram.

The death toll was initially believed to be 16 but was later pegged at 14, with 25 others injured. Among those with injuries were ten children, believed to be students. Oleksiy Kuleba, the head of the Kyiv regional administration, said employees of the kindergarten and other students sustained injuries.

“We saw wounded people, we saw children. There was a lot of fog here, everything was strewn all around. We could hear screams, we ran towards them,” Hlib, a 17-year-old local resident, told Reuters. “We took the children and passed them over the fence, away from the nursery as it was on fire.”

Another eyewitness, 56-year-old Vitaliy, said he saw the aircraft falling, followed by the hurling of debris into a nearby block of flats.  “I thought it was the engine from a rocket or something like that, something huge,” he said.

Soon after the crash, it took the combined forces of police officers, National Guard soldiers, doctors, Ukraine’s security servicemen, and the nursery school staff to extinguish the fire and rescue some of the victims.

Denys Monastyrskyy was not the only official of the Ministry of Internal Affairs that died during Wednesday’s crash. His first deputy, Yevhen Yenin, Secretary of the Ministry Yuri Lubkovych, their assistants, and the helicopter crew also died in the crash.

Anton Gerashchenko, the former deputy minister of Internal Affairs, stated that the crash was a lesson that top politicians cannot travel altogether.

Although the cause of the crash remains unknown, President Zelensky said he had ordered an investigation into what happened on Wednesday. However, Oleskiy Goncharenko, a member of the Ukrainian parliament, said there are two possible causes of the crash.

Top Ukrainian politicians have refused to comment on the cause of the crash. However, fingers could be pointing at Russia. On Wednesday, when addressing the World’s economic forum, President Zelenskyy said there are no accidents in times of war.

“Every individual, every death is a result of the war,”.he said.

Oleskiy Goncharenko, a member of Ukraine’s parliament, said there were only two possible causes of the helicopter crash.

“The first is an accident, and the second is a terrorist attack by Russia – an act of sabotage,” Oleskiy told CNN, describing what happened as a tragedy.

“It will not affect us on the battlefield, but definitely we will now need a new minister, and I hope this will be again a strong man or woman,” he added.

The wait for the outcome of the investigation might be a little long. The commission investigating the crash said the process might take some time but assured the public of a thorough investigation.

“The commission will investigate the causes. It will not take 1-2 days, because the investigation of an aircraft crash takes some time,” the spokesperson of the commission said.

Ukraine’s Interior Minister Denys Monastyrskyy is the highest-ranking Ukrainian official to die in the war in Ukraine. He was in charge of the country’s police and emergency services. He was headed to the frontline in Eastern Ukraine when the helicopter came down, killing him and his team.

Born in the city of Khmelnytskyi, in Western Ukraine, on June 12, 1980, he was 42 at the time of his death. He studied Law at the Khmelnytsky Institute of Regional Management and Law. Upon his graduation in 2002, he started practising as a lawyer.

In 2019, he joined in campaigning for presidential candidate Volodymyr Zelenskyy, who was then the candidate of the Servant of the People party. Following Zelenskyy’s election, Monastyrskyy was voted as a member of parliament and headed the committee on law enforcement.

President Zelenskyy said Mr Monastyrskyy and his team are not people he could replace easily. “We have lost people who were professionals, patriots and reliable managers. Minister Denys Monastyrskyi, Yevhen Yenin, and their colleagues who died in the crash are not people who can be easily replaced,” Zelensky said. “It is a truly great loss for the state. My condolences to the families.”

How the injured victims are faring

At least 25 people sustained injuries during the helicopter crash on Wednesday. At the time of this report, only 15 are still being treated at the hospital. The country’s health minister said 10 out of the 15 were admitted to the Kyiv Medical Burn Center.

“The doctors are working on stabilizing them,” Victor Liashko, the Health Minister, stated. “We are also cooperating with parents to assist with all required documents to send the children to European clinics for further treatment after the severe patients would be stabilized. It does not mean we are unable to provide the needed treatment, it just means that our hospitals need to always have availability for those who suffered during the war.”

Those who sustained injuries were mainly staff and students of the Brovary kindergarten, which the helicopter crashed into.

The helicopter crash in Ukraine has not shocked most of the world. However, the death of Denys Monastyrskyy and other senior officials of the Ukrainian government has shocked most world leaders.

President Joe Biden sent his condolences to the family of the minister and the others that died in the crash. He said: “Jill and I send our deepest condolences to the families of all those killed in the tragic helicopter crash in Ukraine this morning, including Minister of Internal Affairs Denys Monastyrskyy and other senior Ukrainian government officials.”

Our hearts are also with the dozens of civilians who were killed or injured, including precious children, and their families. We grieve with all those who are mourning this heartbreaking tragedy,” Biden’s statement added.

“I was appalled to hear about the fatal helicopter crash and loss of life in Ukraine today. We stand with the people of Ukraine now and always,” the former Prime Minister of the UK, Boris Johnson, wrote.

President Emmanuel Macron of France was not left out. He wrote: “Saddened by the tragic death of Ukrainian Interior Minister Denys Monastyrsky. Thoughts for all the victims of this terrible event that occurred near a kindergarten, for the children and the families. France offers its condolences to its Ukrainian friends.”

Other world leaders have also sent their condolences to the government and people of Ukraine, promising to provide more assistance to the warring nation.