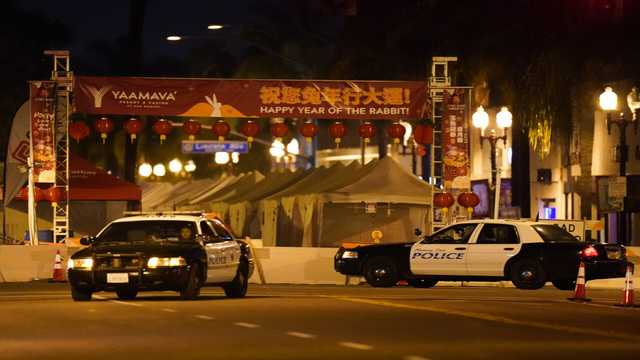 As the Asian community in the United States gathers to celebrate Lunar New Year over the weekend, a gunman invaded a dance studio in Monterey Park in California, killing at least 11 people and injuring ten others. On Sunday, authorities reported ten deaths, of which five were males while the other five were females. The eleventh victim died on Monday at the hospital.

“Our heroic staff at LAC+USC Medical Center have worked tirelessly to care for the four victims entrusted to our care. Unfortunately, despite our best efforts, we are saddened to share that one of the victims has succumbed to their extensive injuries. We want to express our deepest sympathies to their families and loved ones,” LAC+USC Medical Center said in a statement on Monday.

According to the Police, the suspect fired at least 42 rounds of ammunition from a high-capacity handgun. A 9 mm calibre semi-automatic MAC-10 assault weapon was recovered at the Alhambra dance studio, the attacker’s second destination after the killings at the first dance studio.

Following the mass shooting, the suspect fled to a nearby dance studio in Alhambra, where he was disarmed by a courageous civilian. He later fled the scene.

The killer was 72–year-old

The trigger-happy gunman has been identified as 72-year-old Huu Can Tran. Los Angeles County Sheriff Robert Luna said the suspected entered the dance studio at about 10:00 p.m. on Saturday at the time thousands were joining the new year’s celebration in the city. Antigua news confirmed that the suspect was a frequent figure at the dance studio and was well known by other regular visitors.

At about 10:22 p.m., he opened fire at the victims, killing about 10 of them at the scene. During a news conference on Monday, Robert Luna said he possibly shot at one victim inside a car before entering the Star Ballroom Dance Studio.

“We believe – and again I’d like to tell you this is exactly what happened but we are still putting it all together – we believe that that victim was probably shot before he started his rampage inside,” Luna stated.

Barely 20 minutes after killing ten people, he was at another dance studio in Alhambra, possibly wanting to take more lives. Thankfully, a young man wrestled the gun away from him. Left with no option, he fled the scene, and it was left to the Police to find the most wanted man in America at that point.

The search for the man in a white van began on Saturday night, but it was not until Sunday morning that the police found the wanted vehicle in Torrance, about 30 miles from the scene of the mass shooting. As the police got close to the van, they heard a gunshot, which they believed was targeted towards them. But it was Tran’s last shot and the shot that killed him.

“When officers exited their patrol vehicle to contact the occupant, they heard one gunshot coming from within the van,” Luna, Los Angeles County Sheriff, stated. “Officers retreated and requested several tactical teams to respond.” Three armoured vehicles blocked the van, and on arrival, the police discovered that Tran had killed himself.

Disarmed by a hero

The death toll for Saturday night’s shooting would have been higher if not for the intervention of Brandon Tsay, who disarmed him in his second location in Alhambra.

Brandon Tsay is being hailed as a hero for stopping the Monterey Park mass shooter at the Lai Lai Ballroom in Alhambra, California. He told ABC that the incident has left him “shook.”

“I was looking into the dance ballroom, the dance floor, and this is when I heard the sound of the front door quickly closing and instantly followed by the sound of metal object clinking together as if they were rubbing. That’s when I turned around and saw that there was an Asian man holding a gun,” Brandon Tsay told ABC.

He said the man looked like someone that was looking for specific “people to harm,” and he was not at the dance studio to rob.

“Something came over me – I realized, I needed to get the weapon away from him,” Tsay continued.  “When I got the courage, I lunged at him with both my hands, grabbed the weapon and we had a struggle. We struggled into the lobby, trying to get this gun away from each other.”

After recovering the gun from the 72-year-old shooter, Tsay ordered him out and called the Police.

Brandon Tsay told CNN that it was his first time holding a gun and that although he appeared courageous for disarming the shooter, he was scared for his life.

“A lot of people have been telling me how much courage I had to confront the situation like this,” Tsay said. “But, you know what courage is? Courage is not the absence of fear, but rather the ability to have adversity of fear when fearful events happen such as this.”

Brandon Tsay had been described by many as a hero and lifesaver following his rare act of courage. Hilda Solis, Los Angeles County Supervisor, on Monday, said he was a “hero” for doing what many would not even imagine.

“This individual did what many would never be able to do or imagine, but he saved so many more lives,” Solis said.

California Governor Gavin Newsom shared a picture on social media of himself meeting the hero of the day, Brandon Tsay, on Monday. He wrote: “This is what a hero looks like. Brandon did what no one should ever have to do — stopped a gunman at his place of work from killing countless others. Forever grateful for your courage, Brandon.”

At least 65% of the residents in Monterey Park are Asian Americans, and most of them join in celebrating the Lunar New Year celebrations. Although the motive of the attacker remains unknown, there are indications that the Asian community was the target as all the identified victims are Asians.

Although the identities of all the victims have not been released, the few whose names have been made public are Asian Americans, and two were specifically Taiwanese Americans. Why would Asians be his target? The first answer that comes to mind is that since the spread of the Coronavirus to the United States, there has been a growing dislike for the Asian community.

“We’ve been on edge the last few years as Covid rose and impacted our communities and the rise of Asian hate in our communities as well. And to deal with this on top of that — for our local community — has just been tremendously tragic,” Monterey Park City Council Member Thomas Wong told CNN.

Robert Luna said it would be difficult to know the real intention of the shooter, especially since he was not alive, but insisted that the investigation would reveal the shooter’s motive.

“We intend to find out,” he said. “This is disturbing. How can you even come to reason that somebody would even think about doing something like this? It’s horrendous.”

More mass shootings than days in 2023

The debate on gun control in the United States resumed in 2023 following the deadly shootings in the country. This year alone, there have been at least 37 mass shootings in the US according to Gun Violence Archive.

What that means is that on average, there is more than one mass shooting in the United States per day and that there are more mass shootings than days in 2023. What else do you expect from a country where guns outnumber its citizens?