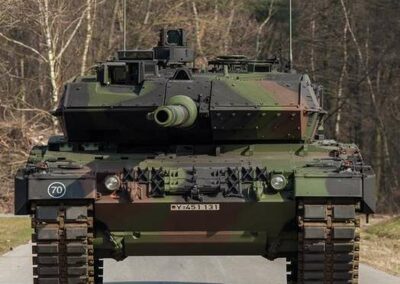 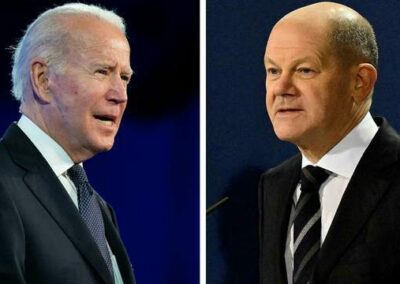 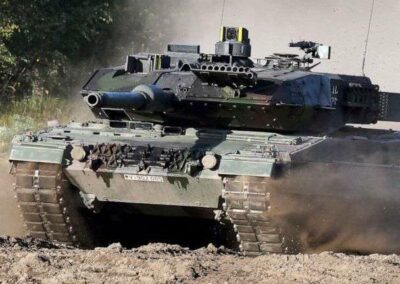 After several weeks of talks and negotiations, Germany has bowed to pressure and accepted to send its Leopard 2 tanks to Ukraine. Berlin said it would provide 14 of the tanks to Kyiv on its first shipment.

“The goal is to quickly assemble two tank battalions with Leopard 2 tanks for Ukraine,” the statement from the German government reads. Under German laws, no country has the power to re-export made-in-Germany weapons until the government in Berlin gives such permission.

Berlin confirmed Wednesday that it would allow foreign countries with Leopard 2 tanks to send them to Ukraine.

“Germany will give the partner countries that want to quickly deliver Leopard 2 tanks from their stocks to Ukraine the corresponding authorizations to transfer them,” the statement added. Poland and other NATO countries have been putting pressure on Germany to allow them to send the Leopard 2 tanks in its possession. With the new development, these countries can now send the weapons to Ukraine.

Germany’s statement also confirmed that it would train Ukrainians speedily on the use and maintain the complex tanks.

“The training of the Ukrainian crews is to begin quickly in Germany,” the statement continued. “In addition to training, the package will also include logistics, ammunition and maintenance of the systems.”

German Chancellor Olaf Scholz said the decision to send the Leopard 2 was taken after intensive discussion with allies.

“It is right that we advanced bit by bit, that is the only principle that can work in such dangerous conditions also for Europe,” Mr Scholz told parliament. “Our aim is to send two tank battalions.”

“The Abrams tanks are the most capable tanks in the world. They’re also extremely complex to operate and maintain, so we’re also giving Ukraine the parts and equipment necessary to effectively sustain these tanks on the battlefield,” President Biden said Wednesday at the White House. “We’ll begin to train the Ukrainian troops on these issues of sustainment, logistics and maintenance as soon as possible.”

Contrary to public opinion, President Biden said the decision to send the tanks to Ukraine was independently made by his government without pressure from Germany based on the recommendations of Lloyd Austin, the US Defense Secretary.

“Germany didn’t force me to change my mind. We wanted to make sure we’re all together,” Biden continued, adding that the tanks were for Ukraine’s defence and nothing else.

Most EU countries are not left out in the recent supply of arms to Ukraine. France said it is contributing AMX-10s armoured fighting vehicles and critical air defence systems. The Netherlands said it would donate a patriot missile and launchers. Poland said it is sending armoured vehicles, while Italy would give artillery. Other countries that have pledged military assistance are Denmark, Estonia, Lithuania, Latvia, and Finland. In total, Ukraine could receive up to 80 Leopard 2 tanks from Germany and its allies.

Ukraine’s demand for more weapons will go on for as long as the war continues. Following the decision by both countries to send the fighting tanks to Ukraine, government officials are already asking for more.

Dmytro Kuleba, a top official of the Ukrainian government, was grateful for the unity among Ukraine and its allies, saying for them, “impossible is nothing.” He, however, continued calling on all other countries with Leopard 2 tanks to send as many as possible.

“I call on all new partners that have Leopard 2 tanks in service to join the coalition and provide as many of them as possible. They are free now,” Dmytro Kuleba wrote.

Chief of Staff to Volodymyr Zelensky, Andriey Yermak, said Wednesday’s decisions were only the first step.

“The first tank step has been taken,” Andriy Yermak wrote on Telegram. “Next up is the ‘tank coalition’. We need a lot of Leopards.”

President Zelensky, on his part, while thanking leaders of the United States and Germany, said the key thing Ukraine needs now is speed and volume.

“The speed of training of our military, the speed of supplying tanks to Ukraine. The volume of tank support,” he said. Although both countries have pledged the donation of tanks, Ukraine could wait up to two or three months before receiving them. Considering the complexity of the machines, there will be a need for aggressive training for the Ukrainians.

Abrams tanks will burn down like the others, Russia says

While many believe the situation in Ukraine will change following the supply of the US-made Abram tanks and the German-made Leopard 2 tanks, the Kremlin doesn’t think so. While addressing reporters on Wednesday, Dmitry Peskov, a spokesperson to the Kremlin, said if the US Abram tanks are sent to Ukraine they will “burn down just like all the others.”

“I am convinced that many experts understand the absurdity of this idea as well, this plan is quite a failure in terms of technological aspects,” Peskov stated. “We repeat that these tanks will burn down just like all the others. Only they cost a lot, and all this will fall primarily on the shoulders of European taxpayers.”

The Russian ambassador to Germany, Sergei Nechaev, described Berlin’s decision to send its Leopard 2 tanks to Ukraine as “extremely dangerous” and will take the conflict to another level of confrontation. He added that it was a sign that Germany was not interested in a diplomatic solution.

Yet again, we can see that just like its closest partners, Germany is not interested in a diplomatic solution to the Ukrainian crisis, and has its heart set on its permanent escalation and the unlimited pumping of the Kyiv regime with more and more deadly weapons. ‘Red lines’ are a thing of the past,” Mr Nechaev stated.

Russia is said to be preparing for a new offensive and could massively attack Ukrainian cities as it did at the beginning of the war. The tanks could go a long way in helping Ukraine defend itself should that happen. However, there are fears that such tanks could further escalate the war if not used properly, hence Germany’s initial reluctance to send them.

Germany’s decision to send its rare tanks to Ukraine won the hearts of its allies. One man that was critical of Berlin not sending the tanks was Mateusz Morawiecki, the prime minister of Poland. He was among the first to thank Germany and its leader for the decision.

“Thank you Olaf Scholz. The decision to send Leopards to Ukraine is a big step towards stopping Russia. Together we are stronger,” Mateusz Morawiecki wrote.

“The right decision by NATO Allies and friends to send main battle tanks to Ukraine. Alongside Challenger 2s, they will strengthen Ukraine’s defensive firepower,” Rishi Sunak wrote. “Together, we are accelerating our efforts to ensure Ukraine wins this war and secures a lasting peace.”

The UK is among the numerous countries that have pledged the donation of tanks and other military assistance to Ukraine.

The recipient of the tanks, President Volodymyr Zelenskyy, said he was sincerely grateful to the German Chancellor “and all our friends in Germany” for the gesture.

While announcing the donation of the Abrams tanks, President Joe Biden also commended the German Chancellor for allowing the shipment of the Leopard 2 tanks.

“I’m grateful to Chancellor Scholz for providing German Leopard 2 tanks and will lead an effort to organize the European contribution of two tank battalions for Ukraine. I want to thank the chancellor for his leadership and his steadfast commitment to our collective efforts to support Ukraine,” Biden said.