(Reuters) – President Vladimir Putin has shifted the Ukraine crisis into a new, more dangerous phase with a barrage of words and actions that suggest his ultimate aims go far deeper than extending Russian sway over two struggling separatist regions.

Putin signed friendship treaties on Monday night with the so-called Donetsk and Lugansk people’s republics proclaimed by Russian-backed separatists in eastern Ukraine, in a move denounced as illegal by the West and met with immediate sanctions, including on Russian banks and a major new gas pipeline.

But it was the extraordinary televised speech preceding the signing that offered deeper clues to Putin’s thinking, as he twisted centuries of history into an hour-long diatribe portraying Ukraine as an artificial nation with no tradition of statehood.

Kremlin watchers said his lecture looked like an attempt to justify deeper aggression against Ukraine and a possible new invasion, eight years after he captured and annexed Crimea.

“He has questioned the right to sovereignty of Ukraine and he’s declared that this was a historic mistake, a historic accident that Ukraine is existing,” said Gerhard Mangott, a professor at Austria’s Innsbruck University and member of a group of Russia experts that meets yearly with Putin.

“So it’s most likely that his final ambition is to destroy this Ukrainian state, or at least make Ukraine divide into two separate halves,” he said, with Russia controlling the eastern part of the country.

In significant follow-up comments on Tuesday, Putin said he was recognising the entire Donetsk and Luhansk regions of east Ukraine, which together comprise an area known as the Donbass, as forming their breakaway “republics,” even though only a fraction of that territory is controlled by the separatists.

With Russia affirming the right under its new treaties to send in troops and build military bases, that opens up the risk it could enter an open war with Ukraine to extend the separatist territories.

Putin has always denied planning to reinvade Ukraine but his huge military build-up on its borders since November has prompted brutal falls in Russian shares, government bonds and the rouble. His latest moves have heightened anxiety among the Russian elite.

“We’re all at a loss. We’re all very nervous. No one knows what the endgame is,” said a former high-placed official.

Putin’s latest move has killed off any lingering hopes of ending the eight-year separatist war in Ukraine by reviving peace agreements signed in 2014 and 2015 – an ominous shift from diplomacy towards force.

“By abandoning the Minsk agreements, Russia has deprived itself of one avenue of potential long-term political leverage over Ukraine and will now be seeking another one,” said Oleg Ignatov, senior analyst for Russia at International Crisis Group.

In his speech, Putin looked like a man who, after more than two decades as Russia’s paramount leader, is thinking more about his legacy than about the casualties and economic costs that a full-scale war with Ukraine would entail.

It followed comments from British Prime Minister Boris Johnson this week that Putin might not be thinking logically and sanctions might not deter an “irrational actor”. Dutch Prime Minister Mark Rutte described him as “totally paranoid”.

“We’ve seen a shift from Putin (as) the kind of pragmatic, rational calculating leader, to someone who is increasingly looking for their place in history, who sees themself on a historical mission to right injustices,” said Neil Melvin of the RUSI think-tank in London.

That led to a shift in Putin’s risk calculus where the short-term costs of his actions paled into insignificance compared to the bigger historical picture, he said.

Melvin, who recently returned from meetings with senior Russian officials in Moscow, said the Ukraine crisis was only beginning to unfold.

“To be frank, you don’t station 200,000 troops on the border with Ukraine and invoke the biggest crisis in European security for 40 years if all you’re trying to do is extend your control over two small territories that you already control,” he said.

The next stage would be determined by the entry of Russian forces into Donetsk and Luhansk and possible moves to expand into wider territory, depending on how Ukraine responds.

“I think that’s what we need to look for now,” Melvin said. “It’s how will the trigger be pulled for this wider military incursion?” 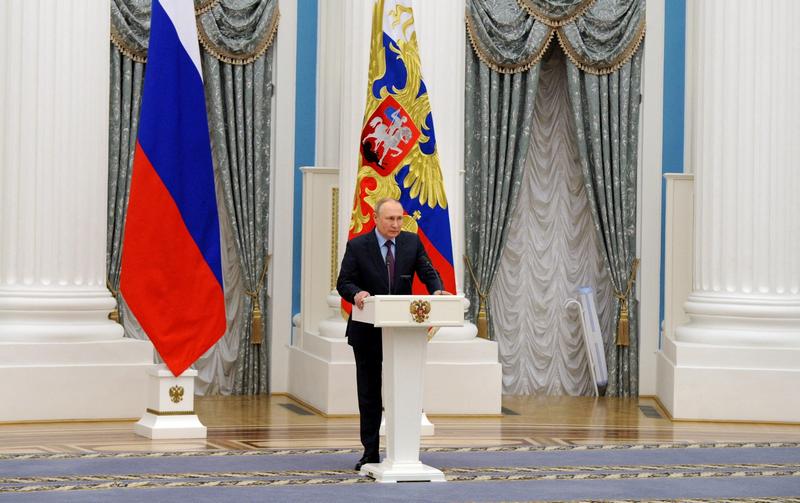 Russia’s President Vladimir Putin speaks to the media following a meeting with Azerbaijan’s President Ilham Aliyev at the Kremlin in Moscow, Russia, February 22, 2022.