By Andrew Osborn and Natalia Zinets

MOSCOW/KYIV (Reuters) – Russian forces fired missiles at several cities in Ukraine and landed troops on its south coast on Thursday, officials and media said, after President Vladimir Putin authorised what he called a special military operation in the east.

Shortly after Putin spoke in a televised address on Russian state TV, explosions could be heard in the pre-dawn quiet of the Ukrainian capital of Kyiv.

Gunfire rattled near the capital’s main airport, the Interfax news agency said, and sirens were heard over the city.

“This is a war of aggression. Ukraine will defend itself and will win. The world can and must stop Putin. The time to act is now.”

U.S. President Joe Biden, reacting to an invasion the United States had been predicting for weeks, said his prayers were with the people of Ukraine “as they suffer an unprovoked and unjustified attack by Russian military forces”.

Russia has demanded an end to NATO’s eastward expansion and Putin repeated his position that Ukrainian membership of the U.S.-led Atlantic military alliance was unacceptable.

He said he had authorised military action after Russia had been left with no choice but to defend itself against what he said were threats emanating from modern Ukraine, a democratic state of 44 million people.

“Russia cannot feel safe, develop, and exist with a constant threat emanating from the territory of modern Ukraine,” Putin said. “All responsibility for bloodshed will be on the conscience of the ruling regime in Ukraine.”

The full scope of the Russian military operation was not immediately clear but Putin said: “Our plans do not include the occupation of Ukrainian territories. We are not going to impose anything by force.”

Speaking as the U.N. Security Council held an emergency meeting in New York, Putin said he had ordered Russian forces to protect the people and appealed to the Ukrainian military to lay down their arms.

Ukrainian President Volodymyr Zelenskiy said Russia had carried out missile strikes on Ukrainian infrastructure and border guards, and that explosions had been heard in many cities.

He said that martial law had been declared and that he had spoken by telephone to Biden. Reservists were called up on Wednesday.

Media reported that military command centres in Kyiv and the city of Kharkiv in the northeast had been struck by missiles while Russian troops had landed in the southern port cities of Odessa and Mariupol.

Russian-backed separatists said they had launched an offensive on the Ukrainian-controlled town of Shchastia in the east, Russia’s Interfax news agency said, and explosions also rocked the breakaway eastern Ukrainian city of Donetsk.

Global stocks and U.S. bond yields dived, while the dollar and gold rocketed higher after Putin’s address. Brent oil surged past $100/barrel for the first time since 2014. [MKTS/GLOB]

Biden said Putin had chosen a premeditated war that would bring a catastrophic loss of life and human suffering.

“Russia alone is responsible for the death and destruction this attack will bring, and the United States and its Allies and partners will respond in a united and decisive way. The world will hold Russia accountable,” he said.

While he has ruled out putting U.S. troops on the ground in Ukraine, he said he would announce further sanctions against Russia on Thursday, in addition to financial measures imposed this week.

U.N. Secretary-General Antonio Guterres made a last-minute plea to Putin to stop the war “in the name of humanity’, after the Russian leader announced the military operation.

“President Putin, in the name of humanity, bring your troops back to Russia,” Guterres said, speaking after the Security Council meeting.

The consequences of a war would be devastating for Ukraine and far-reaching for the global economy, he said.

Russia’s U.N. envoy said his country was not being aggressive against the Ukrainian people but against the “junta” in Kyiv.

Ukraine earlier restricted civilian flights in its airspace hours after a conflict zone monitor warned airlines should stop overflights over the risk of an unintended shooting down or cyber attack.

Shelling had intensified since Monday when Putin recognised two separatist regions as independent and ordered the deployment of what he called peacekeepers, a move the West called the start of an invasion.

In response to Putin’s Monday announcement, Western countries and Japan imposed sanctions on Russian banks and individuals but have held off their toughest measures until an invasion began.

The United States stepped up the pressure on Wednesday by imposing penalties on the Russian firm building the Nord Stream 2 gas pipeline and its corporate officers.

Germany on Tuesday froze approvals for the pipeline, which has been built but was not in operation, amid concern it could allow Moscow to weaponise energy supplies to Europe.

(This story has been refiled to drop extraneous letter “I” at start of paragraph one.) 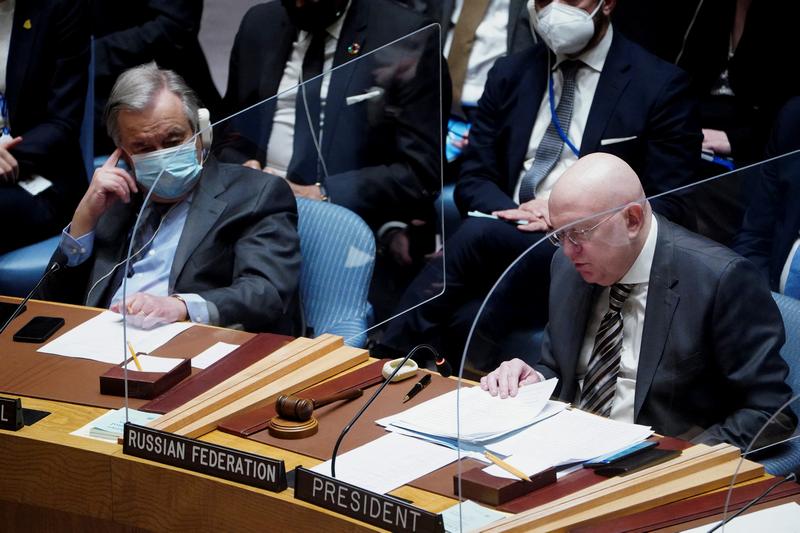 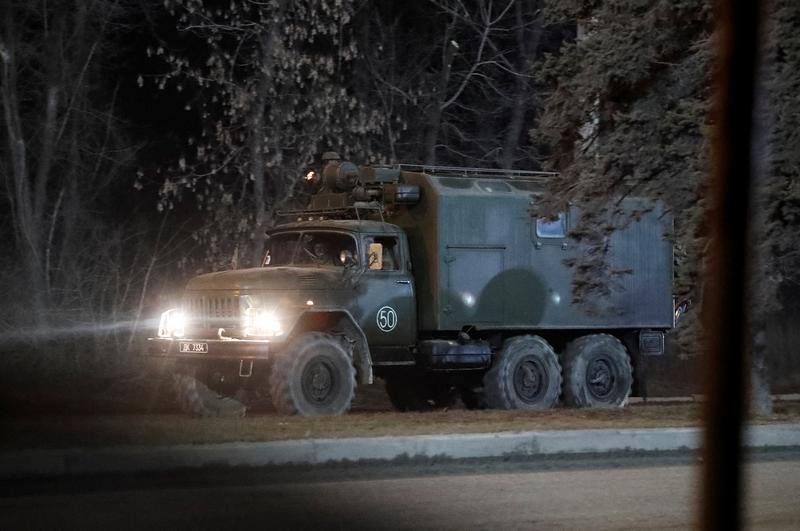 A military vehicle is seen on a street on the outskirts of the separatist-controlled city of Donetsk, Ukraine February 24, 2022. 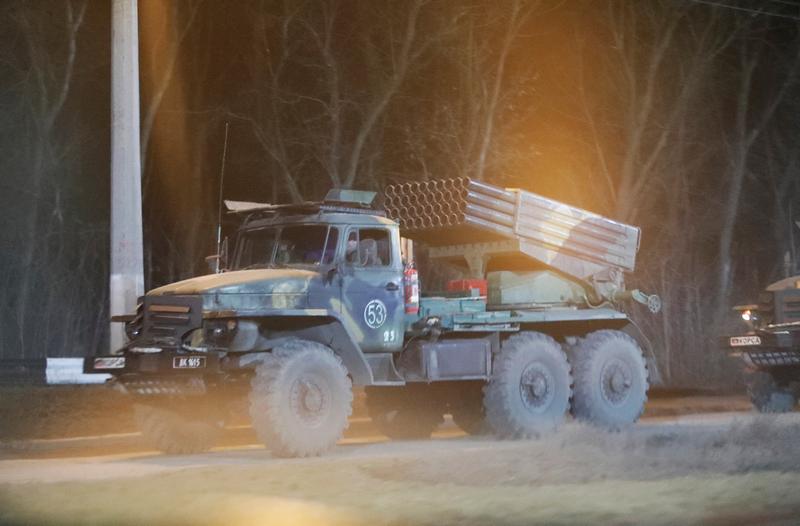 A military vehicle is seen on a street on the outskirts of the separatist-controlled city of Donetsk, Ukraine February 23, 2022. 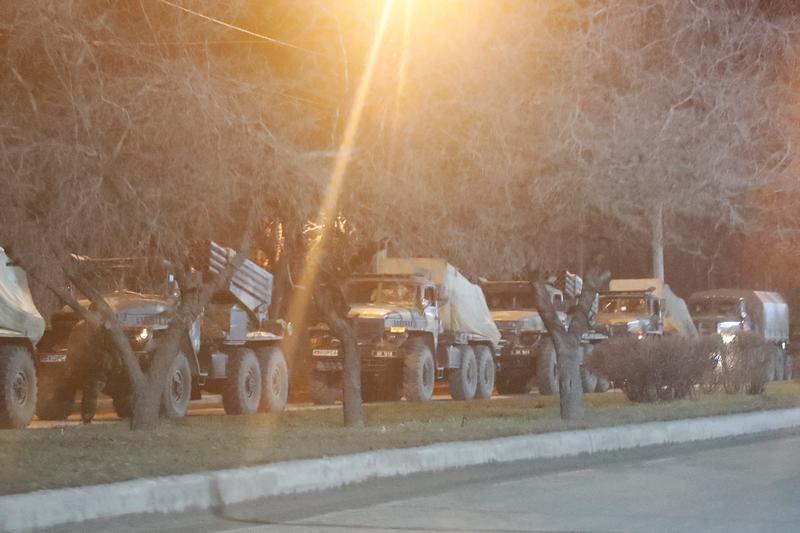 Military vehicles are seen on a street on the outskirts of the separatist-controlled city of Donetsk, Ukraine February 23, 2022. 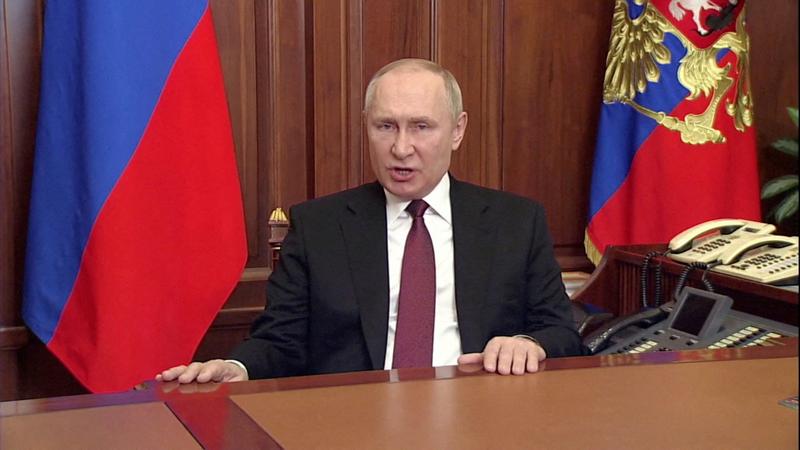 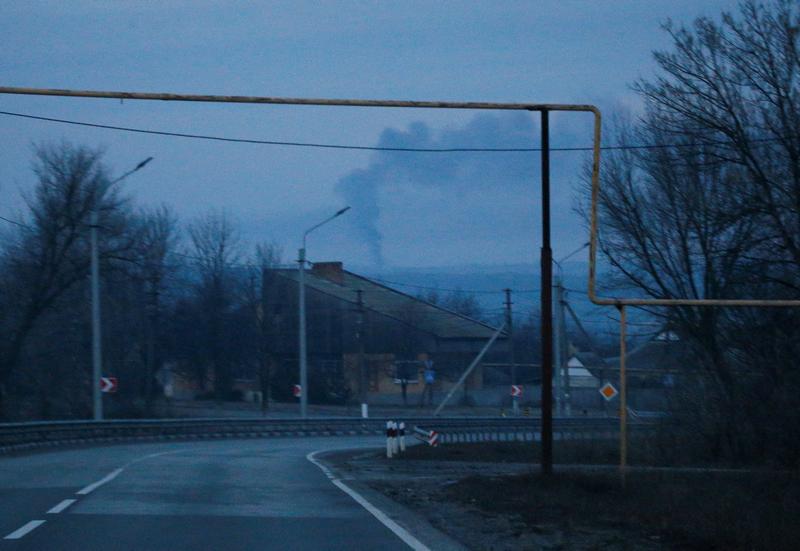 Smoke rises over the area near the town of Chasiv Yar in the Donetsk region, Ukraine February 24, 2022. 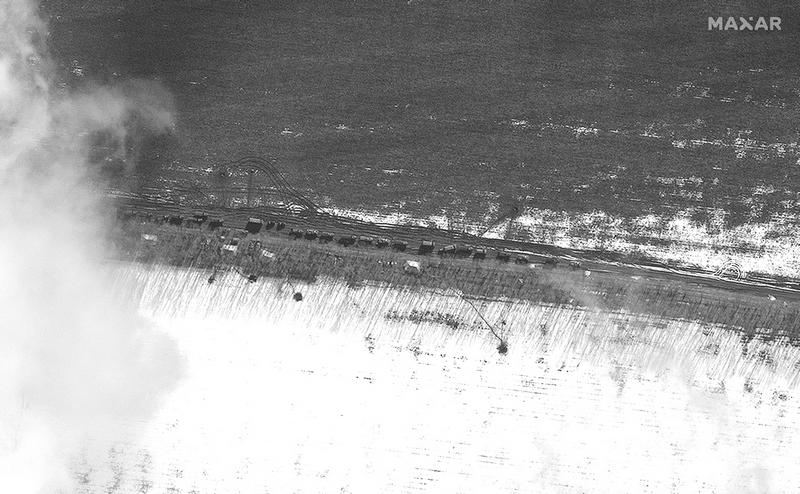 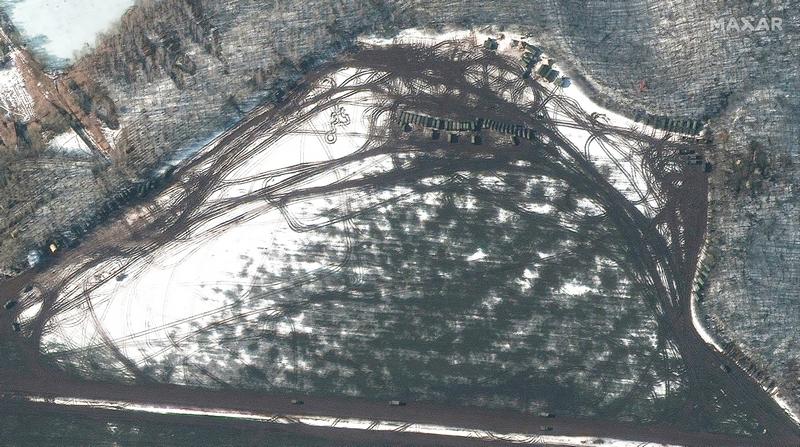 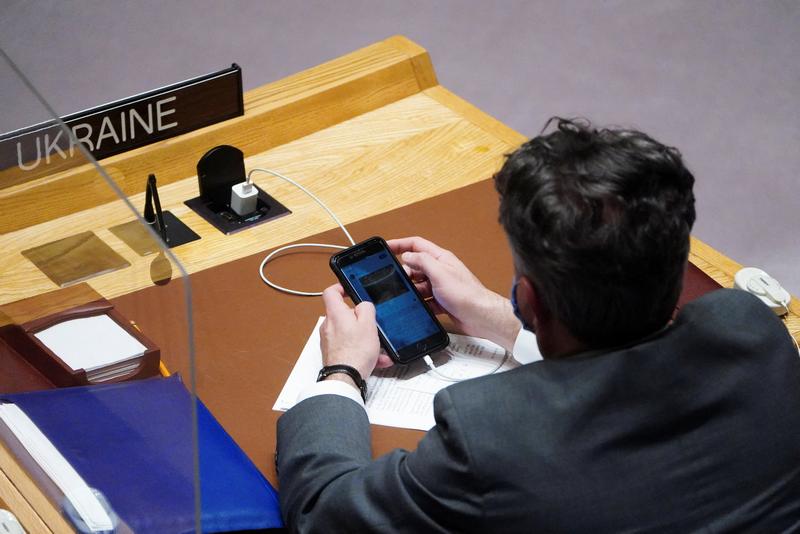 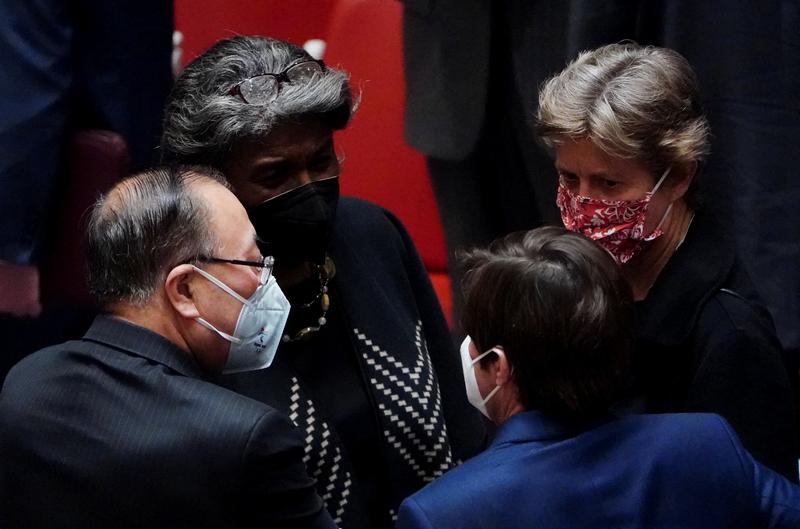 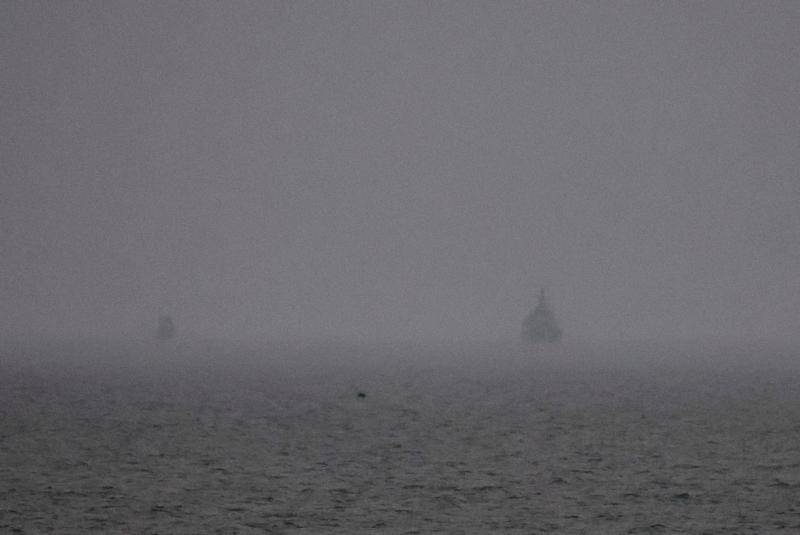 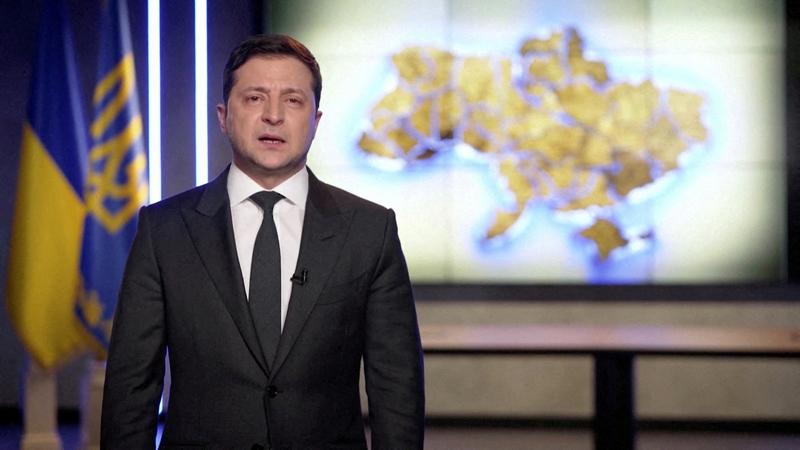 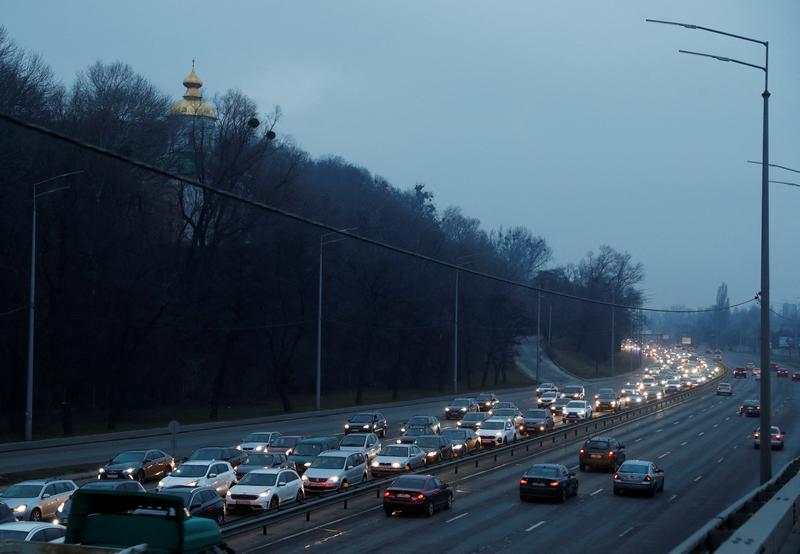 Cars drive towards the exit of the city after Russian President Vladimir Putin authorized a military operation in eastern Ukraine, in Kyiv, Ukraine February 24, 2022. 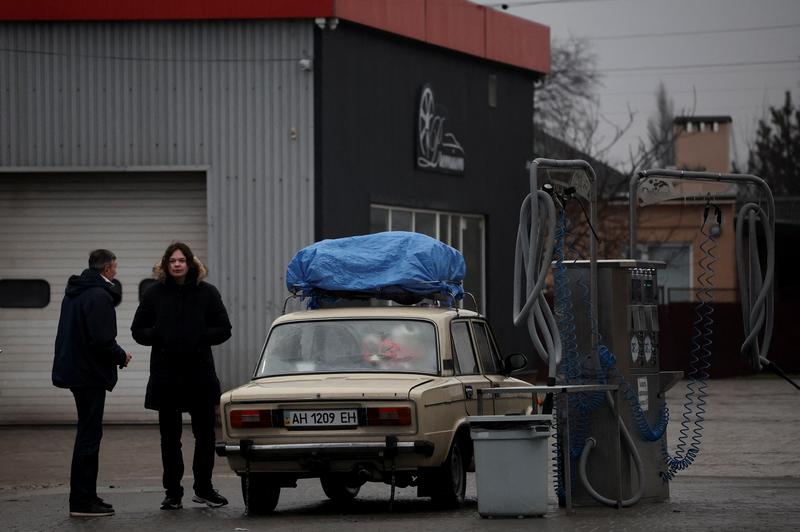