Russia withdrew its forces from outside Kyiv last month after failing to take the capital in the initial stages of its Feb. 24 invasion and launched a massive attack in Ukraine’s eastern Donbas region.

Moscow regards winning the “Battle for Donbas” as crucial if it is to achieve its stated aim of securing control over the Donetsk and Luhansk regions, Britain’s defence ministry said.

“Fighting has been particularly heavy around Lysychansk and Severodonetsk, with an attempted advance south from Izium towards Slovyansk,” the ministry said on Twitter.

Due to strong Ukrainian resistance, Russian territorial gains have been limited and achieved at significant cost, the ministry added in the regular bulletin. Reuters could not immediately verify the report.

Some of the fiercest fighting and bombardments have occurred in the south and east of Ukraine, with the southern port of Mariupol under siege for months and in ruins. Its remaining residents and Ukrainian forces are holed-up underground in the Azovstal steel works.

Capturing Mariupol would link pro-Russian separatist territory with the Crimea region that Moscow annexed in 2014.

Mariupol city council has said about 100,000 city residents were “in mortal danger” because of Russian shelling and unsanitary conditions. It said the shortage of drinking water and food was “catastrophic”.

A Ukrainian presidential adviser said this week that Russia was hitting the Azovstal steel plant with bunker-buster bombs. Reuters could not verify the details.

Ukrainian commanders at Azovstal have vowed not to surrender.

Ukraine’s general staff said on Friday that Russia was shelling Ukrainian positions along the line of contact in the south and east to prevent them regrouping. It said Azovstal remained cut off.

Two Russian missiles struck Kyiv during a visit by the head of the United Nations on Thursday, Ukrainian officials said, highlighting concerns that the capital remains vulnerable.

Ukraine’s President Volodymyr Zelenskiy said the blasts “prove that we must not drop our vigilance. We must not think that the war is over.”

Moscow’s assault in the east drew new U.S. pledges of military and humanitarian aid for Ukraine on Thursday.

“We need this bill to support Ukraine in its fight for freedom,” Biden said. “The cost of this fight – it’s not cheap – but caving to aggression is going to be more costly.”

Ukraine dismisses Putin’s claims of persecution and says it is fighting an imperial-style land grab that has flattened Ukrainian cities, forced more than 5 million to flee abroad and killed thousands since the invasion started on Feb. 24.

Washington, which together with its allies has placed sweeping sanctions on Moscow, hopes Ukrainian forces can not only repel Russia’s assault in the east but also weaken its military so that it can no longer menace neighbours.

Russia regards NATO’s actions as tantamount to waging a “proxy war” against it, and has made a number of threats this week of unspecified retaliation.

It cut gas supplies to Poland and Bulgaria on Wednesday after they refused to pay in roubles, marking Moscow’s toughest response yet to Western economic sanctions.

Russia has reported what it says have been a series of Ukrainian strikes on Russian regions that border Ukraine and has warned that such attacks risk significant escalation.

Ukraine has not directly accepted responsibility for strikes inside Russia but says the incidents are payback. Russia has taken umbrage at statements by NATO member Britain that it is legitimate for Ukraine to target Russian logistics.

“In the West, they are openly calling on Kyiv to attack Russia including with the use of weapons received from NATO countries,” Russian Foreign Ministry spokeswoman Maria Zakharova told reporters in Moscow.

“I don’t advise you to test our patience further.”

The U.S. mission to the OSCE security body said the Kremlin might attempt “sham referenda” in southern and eastern areas it had captured since the Feb. 24 invasion, using “a well-worn playbook that steals from history’s darkest chapters”.

“These falsified, illegitimate referenda will undoubtedly be accompanied by a wave of abuses against those who seek to oppose or undermine Moscow’s plans,” the U.S. mission said. There was no immediate Russian comment. 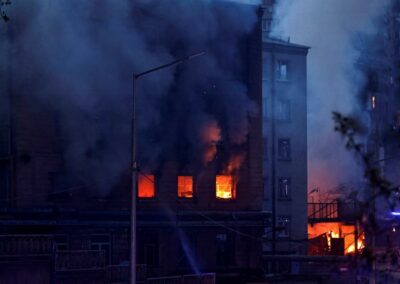 Fire burns in a building after a shelling, amid Russia’s invasion of Ukraine, in Kyiv 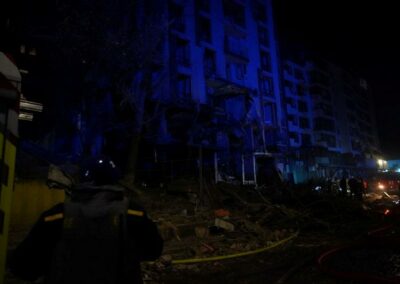 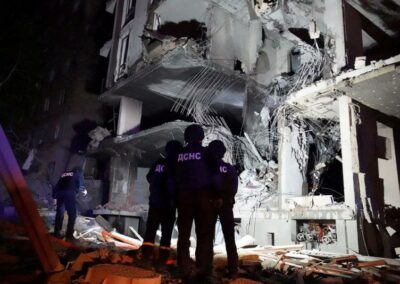 Rescuers work at a site of a building damaged by a missile strike, as Russia’s attack on Ukraine continues, in Kyiv, Ukraine April 28, 2022. Press service of the State Emergency Service of Ukraine 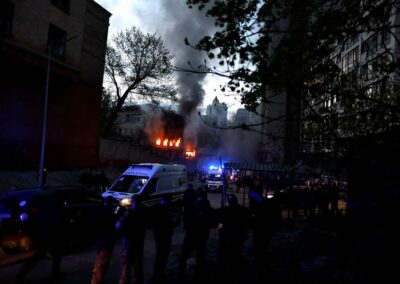 Fire burns in a building after a shelling, amid Russia’s invasion of Ukraine, in Kyiv, Ukraine April 28, 2022. 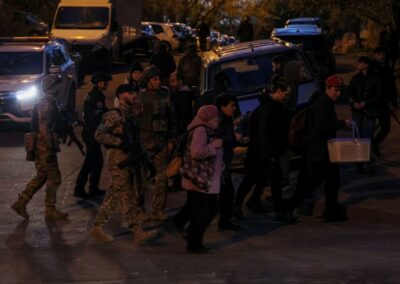 Local residents escape from their building after a shelling, amid Russia’s invasion of Ukraine, in Kyiv, Ukraine April 28, 2022. 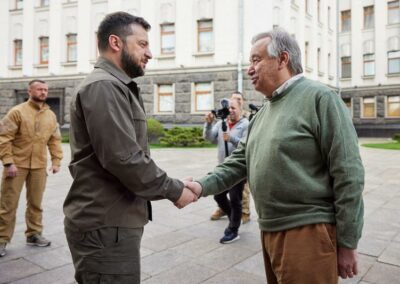 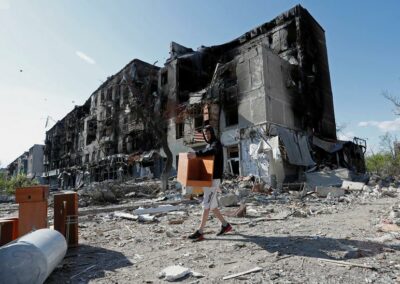 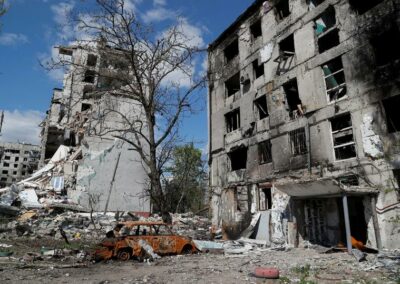 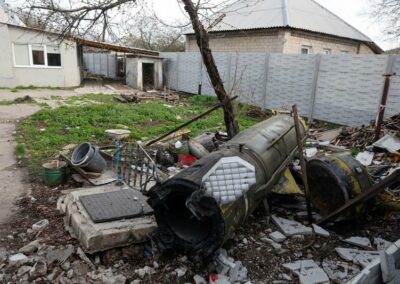 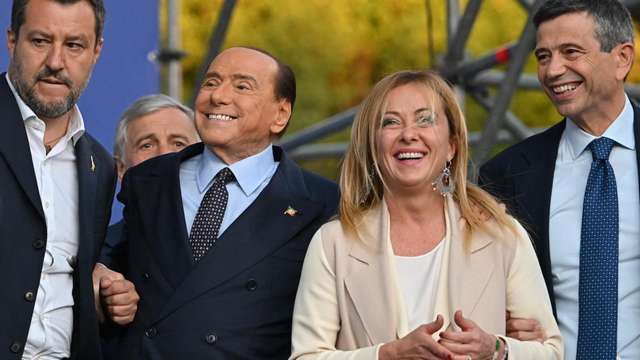