Russian soldier gets a life sentence in Ukraine

Captured Russian soldier Sgt Vadim Shishimarin has been jailed for life in Ukraine by a court in Kyiv. The 21-year-old had earlier pleaded guilty to the killing of 62 years old, Oleksandr Shelipov in North-Eastern Ukraine. Read more

During the trial, the 21-year-old Russian soldier said he killed Mr. Shelipov at the order of a superior soldier. His lawyer argued that he should get a shorter sentence because he was carrying out a military order. He also told the court that Shishimarin pulled the trigger reluctantly for his safety.

After five days of trial, the court finally delivered a judgment. While reading the judgment of the court, Judge Serhiy Agafonov explained that although Shishimarin had carried out an order from a superior soldier, it was a “criminal order.” The judge also said, “Given that the crime committed is a crime against peace, security, humanity, and the international legal order, the court does not see the possibility of imposing a (shorter) sentence.”

Ahead of the court verdict, Shishimarin had said, “I regret it. I regret it very much. I did not refuse, and I am ready to accept any measures imposed.” He had previously apologized to the widow of the murdered Ukrainian, asking her for forgiveness. He also expressed deep regrets for his actions when he said he said; “I sincerely repent. I was nervous at the time. I did not want to kill… It’s just how it happened.” Without a doubt, the young soldier was remorseful for his actions, and a simple look at him will move you to pity, but the blindness of the law is the only thing that can guarantee justice.

While Shishimarin has accepted the decision to spend his life behind bars, his lawyer has vowed to appeal the judgment. Viktor Ovsyannikov, a Ukrainian, has said the decision was taken by the court because there have been “certain pressure from society.”

This is the first among hundreds if not thousands of cases of war crimes that will come up in connection with the Russian invasion of Ukraine. Over 10,000 suspected cases of crimes against humanity committed by Russian soldiers are currently being investigated in Ukraine. According to the UN, over 3,000 civilians have been killed in Ukraine.

While the judgment is of interest to Ukrainians, the world is now worried about what Russia will do with the Ukrainian soldiers it has captured. There are already indications that Ukrainian soldiers who surrendered at the Azovstal steel plant will face trials in the Russian-backed breakaway Donetsk People’s Republic. There are also indications that the Russian government is setting up tribunals to try prisoners of war it has captured in Ukraine. If Russians can be sentenced in Ukraine, then Ukrainians will be sentenced in Russia as well.
Both Ukraine and Russia are currently using whatever tools at their disposal to fight each other. A new tool has just been introduced, and the war is about to enter a new phase. In this phase, the law will be the instrument.

At the moment, Kateryna Shelipova can at least find solace in the fact that the killer of her husband has gotten his punishment. 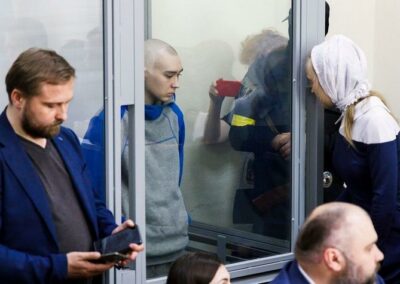 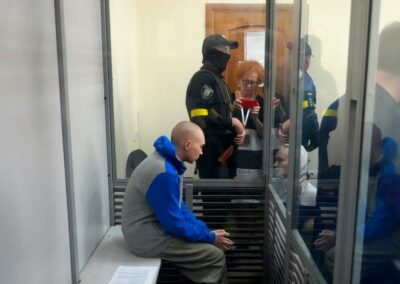