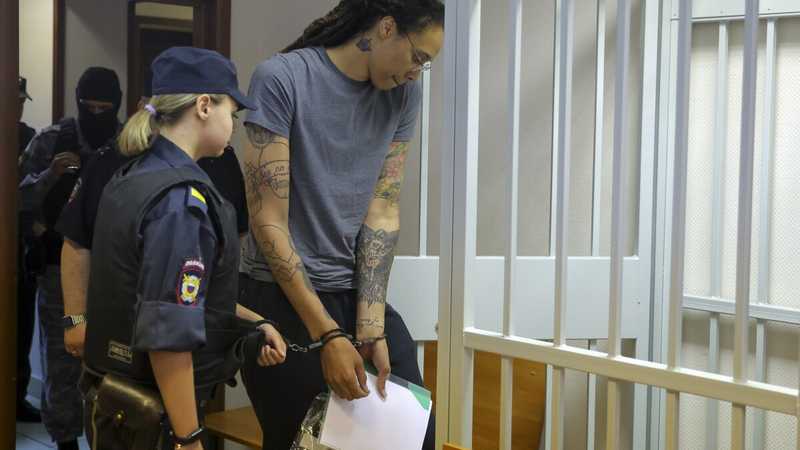 Two-time Olympic medalist Brittney Griner was sentenced to nine years in prison by a Russian Court on Thursday. The athlete was found guilty of deliberately bringing cannabis-infused vape cartridges into Russia. She was arrested in February.

Last month, Brittney pleaded guilty to all the charges against her, saying it was not her intention to commit a crime in Russia.

“I would like to plead guilty to the charges, but I had no intention of breaking any Russian law,” she said last month. “I was in a rush packing, and the cartridge accidentally ended up in my bag,” Brittney told the court last month.

The use and possession of cannabis are punishable by Russian law. Despite her plea, it was obvious that the Russian government, which is currently in a power tussle with the U.S over the war in Ukraine would ensure the athlete gets the maximum sentence. Political analysts see her as a political pawn. The Russian court has ruled that she remains in prison for nine years. The court also fined her 1 million roubles ($16,990).

“She can hardly talk. It’s a difficult time for her. When we saw Brittney on Tuesday, we told her, ‘See you on Thursday.’ She said, ‘See you on doomsday.’ So it looks like she was right,” Maria Blagovolina said.

President Biden is under intense pressure to bring Brittney Griner and other Americans in Russian prisons back home. Reacting to the judgment, Biden said it was “unacceptable,” and that his government would do everything to get the 31-year-old back home.

“Today, American citizen Brittney Griner received a prison sentence that is one more reminder of what the world already knew: Russia is wrongfully detaining Brittney,” Biden said. “It’s unacceptable, and I call on Russia to release her immediately so she can be with her wife, loved ones, friends, and teammates.”

“My administration will continue to work tirelessly and pursue every possible avenue to bring Brittney and Paul Whelan home safely as soon as possible,” President Biden added in his statement.

If there is one reason why Griner’s case was easy for the Russian court, it was her remorseful comments and guilty plea. After pleading guilty last month, she also admitted her errors before he was sentenced. She described her action as “an honest mistake.”

“I made an honest mistake, and I hope that in your ruling, that it doesn’t end my life here,” Griner told the court. “My parents taught me two important things: one, take ownership of your responsibilities, and two, work hard for everything that you have. That’s why I pled guilty to my charges.”

Griner was not unaware of the politics surrounding her case. She asked the court not to be political with its judgment.

“I want to say again that I had no intent on breaking any Russians laws,” she told the court and broke down in tears. “I had no intent. I did not conspire or plan to commit this crime.”

“I know everybody keeps talking about political pawn and politics, but I hope that is far from this courtroom,” she added.

The United States had proposed a prisoners swap to get Griner out of Russian prison. Read More. Experts said Russia was delaying the negotiations because Griner had not been sentenced.

After Thursday’s judgment, the two countries can now sit at the negotiating table to discuss the conditions for the release.

“I hope that, now that the sentencing has occurred, the trial is over, no more court, that the negotiations will proceed,” Griner’s high school basketball coach Debbie Jackson told Reuters. “I’m praying that both sides will negotiate in good faith and that Brittney and other Americans that are in Russian prison can come back home.”

The United States offered convicted arms trafficker Viktor Bout in exchange for Brittney Griner and former Marine Paul Whelan, who is also serving time in a Russian prison. It is unlikely that Russia would agree to the American terms and conditions in the demands. The Kremlin would unlikely agree to release two criminals for one.

Brittney Griner’s lawyer said she would appeal the judgment. Even if there is an appeal, a Russian court will not let go of an American that has broken its law because she is truly a political pawn. The prisoner swap is no doubt the only way out.